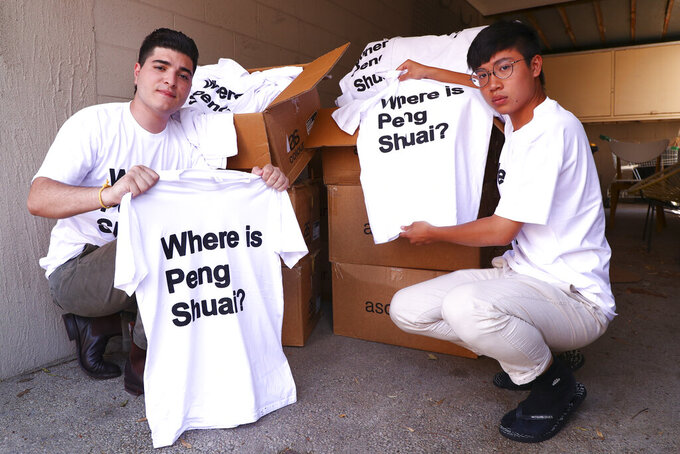 Drew Pavlou, left, and Max Mok show some of the 1,000 shirts they plan to hand out to patrons ahead of Saturday's women's singles final at the Australian Open tennis championships in Melbourne, Australia, Friday, Jan. 28, 2022. As he was being ejected for wearing a shirt with a Where is Peng Shuai? slogan, Max Mok saw an opportunity to amplify the message at the Australian Open. (AP Photo/Tertius Pickard)

MELBOURNE, Australia (AP) — Even as he was being ejected from the Australian Open for wearing a white T-shirt with a “Where is Peng Shuai?” slogan in black letters, Max Mok saw an opportunity to amplify the message of concern for the Grand Slam doubles champion and Olympian from China whose well-being has come into question.

Mok’s plan: He’ll help hand out 1,000 of the shirts Saturday to spectators attending the women’s final between No. 1-ranked Ash Barty of Australia and Danielle Collins of the U.S.

Yes, this is the biggest tennis match of 2022 so far, yet someone nowhere near Melbourne Park is in the hearts and minds of players, fans and the WTA, the organization that runs the women's professional tour.

“We’ve seen members of the tennis community being supportive of Peng Shuai — Naomi Osaka, namely, and lots of others, including Serena Williams,” Mok, an Australian of Chinese heritage, said in an interview with The Associated Press on Friday as he unpacked boxes of the shirts. “It’s a good opportunity to go to the largest tennis event in a while and force (attention).”

Peng, the former No. 1-ranked doubles player who won titles at Wimbledon and the French Open, dropped out of public view in November after accusing a former high-ranking Chinese government official, vice premier Zhang Gaoli, of sexual assault.

Concerns about censorship of Peng and her subsequent disappearance from public view led the WTA to suspend all of its tournaments in China, including the season-ending championships. The head of the tour repeatedly has called for China to investigate the 35-year-old Peng’s accusations and to allow the WTA to communicate directly with her.

“We are all behind her. Everybody wants to have some news and see that she is really fine," said Tatjana Maria, a 34-year-old from Germany who competed in singles and doubles at Melbourne Park. "That’s what’s most important — that she is doing fine and she is well. ... It’s the WTA that has to put pressure (on) China to try to get some news.”

Naomi Osaka, the former No. 1 singles player who won the Australian Open in 2019 and 2021, was asked a couple of times about Peng last week.

“I haven’t heard any news. I’m not sure if that’s concerning or not," Osaka said. "But I think the WTA, the whole organization, they handled it really well. I’m really proud of them.”

Adding to the heightened attention to Peng's case: Beijing hosts the Winter Olympics starting Feb. 4. IOC President Thomas Bach has sought to offer assurances that Peng is fine by saying he has spoken to her via video.

“It is a very, very serious issue, obviously. Do I really think that us continuing to speak about it is really going to make a lot of changes in China? I mean, China is going to do what China is going to do,” said Robin Anderson, a 28-year-old American who lost in the first round of the Australian Open last week. “But it is important for us to continue to keep talking about it and to keep at least trying to put pressure on them.”

Mok and another human rights activist from Australia, Drew Pavlou, have been hoping to do just that at the season's initial Grand Slam tournament. They raised more than 20,000 Australian dollars (about $15,000) to make the shirts they're distributing.

Mok was one of three people — the other two are Chinese nationals — kicked off tournament grounds last weekend for wearing shirts with “Where is Peng Shuai?” printed on them, with the aim of encouraging players to speak out. Citing tournament rules barring “political messaging,” security and police told the the trio they needed to remove their shirts or leave. So they left.

Footage of the episode went viral and sparked widespread condemnation, including from International Tennis Hall of Fame member Martina Navratilova.

“It was never planned. It was a coincidence,” Mok said of a small gesture of activism that drew plenty of attention.

A few days later, Australian Open tournament director Craig Tiley told The Associated Press the rules had been revised, allowing the shirts to worn at Melbourne Park — as long as people don't congregate in large groups or cause problems for other spectators.

“If they want to do that, that’s fine,” Tiley said. But “if anyone’s coming on site with the express intent of disrupting the comfort and safety of our fans, they’re not welcome.”

Pavlou called the way the initial confrontation was handled an example of censorship and intimidation, which “made us committed to double down and get these 1,000 T-shirts out there.”

"They couldn’t evict 1,000 from the final,” he said of Tennis Australia.

Pavlou hopes the Australian Open campaign will continue at the Olympics, even though athletes heading to Beijing have been urged by human rights activists to avoid criticizing China because they could be prosecuted.

Either way, Mok and Pavlou figure they managed to make a statement in Australia — one that could be carried around the world by TV cameras during Saturday's final.

“The tennis community has come together. Obviously we’re all looking out for her safety. We all hope that she’s well. We hope that she’s doing OK," Barty said. "Hopefully it’s not too long until we see her back out here.”