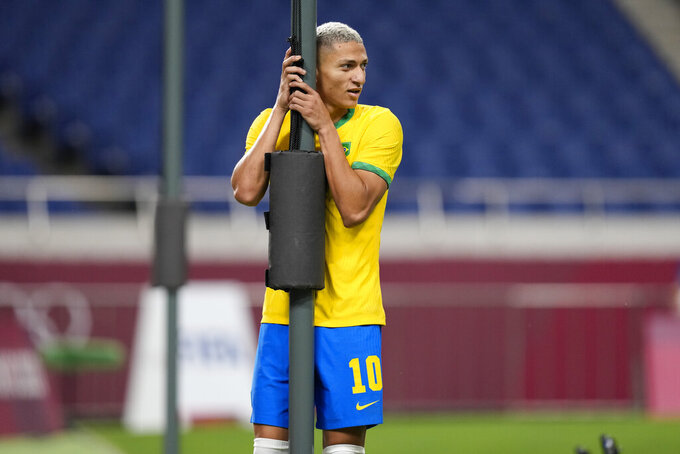 TOKYO (AP) — Some of the unusual aspects around Olympic men's soccer are clearer when you consider Neymar's absence.

That selection decision didn't depend on Brazil, but on Qatar-owned Paris Saint-Germain and its Argentine coach.

Neymar could be blocked from squeezing in more games for his country rather than preparing for a new season with the team paying him millions of dollars a month.

In Neymar’s absence, Brazil has counted on Richarlison for goals instead. Even though, like Neymar, Richarlison has already been away with Brazil for two months. Both were in the side that lost to Argentina three weeks ago in the Copa America final.

Unlike Neymar, Everton was willing to allow Richarlison to delay his entry into the new Premier League season to help Brazil defend gold.

“It’s a dream to come here,” Richarlison said ahead of Tuesday’s semifinal against Mexico. “As a child, I always watched on TV and I always wanted to play at an Olympics so I fought to be here. I am very happy and thanked Everton for releasing me. If it wasn’t for them I wouldn’t be here. They pay my salary.”

For a Copa America or World Cup, Everton would have no say in the matter. But Olympic men’s soccer — unlike the age unrestricted elite women's competition — isn't on FIFA's international calendar mandating clubs to release players for their countries or risk punishments.

However, Spain is a rarity — its clubs have to release players for Spain’s Olympic team.

The men’s competition has morphed from an amateur event, starting 30 years before FIFA's World Cup debuted in 1930, into a beefed-up youth competition, given the usual squad age cap of 23.

Three overage players are permitted which is why a 24-year-old Neymar was available for the 2016 Olympics, only after agreeing with Barcelona to skip that year’s Copa America. It was Neymar’s penalty that clinched gold in the shootout win over Germany at the packed Maracana and created one of the signature moments of the Rio Games that electrified Brazil in a way few Olympics sports managed to.

But Neymar has had to watch from afar as his friend has — at his own recommendation to Richarlison — worn his usual No. 10 jersey.

“He knows I can carry the responsibility on my shoulders,” Richarlison said, recounting their regular phone calls.

With five goals in four games at the Olympics, Richarlison has already done one better than Neymar five years ago. He also set up Matheus Cunha's winner against Egypt in the quarterfinals on Saturday.

Being in the Brazil spotlight away from Neymar, even at the Olympics, could prove the perfect platform to upgrade clubs from Everton to one also playing in the Champions League. It makes it worth the effort, tacking an additional tournament on the end of a season into its 12th month for Richarlison.

“I feel physically and mentally strong,” he said. “I am young and I have even more of my entire career ahead so I have to make the most of it as possible.

“I am very happy to be here with my teammates giving as much as possible so that we can win a very important competition for Brazil where we have to keep our gold.”

It's the value of the gold that remains up for debate as long as Olympic squads aren't the strongest possible. For the Egyptians, the presence of Richarlison on the field on Saturday highlighted just how much they would have benefited from not being denied another striker who plays on Merseyside: Liverpool's Mohamed Salah.

“As long we aren’t the decision-makers here and, as long as his club gets to the decide on it, I can’t have any say about it,” Egypt coach Shawky Gharib said through a translator. “I would like the Olympics to be included on the international calendar."

There is no sign of that happening even as FIFA is in talks with nations, leagues and clubs about the international match calendar after 2024.

But soccer is secure as an Olympic sport. While most games are being played in empty stadiums in Japan due to the pandemic, usually soccer accounts for the most tickets sold at an Olympics. More than 30,000 attended each men's match in 2016 with the cumulative attendance exceeding 1 million.

For players, there's the unique experience of leaving the footballing bubble and mingling in the athlete village. Spain attacker Dani Olmo got the chance to see 20-time grand slam winner Novak Djokovic.

“You’re living with stars,” Olmo said, “and this atmosphere is incredible for us.”

Olmo and five Spain teammates are preparing for a semifinal with host Japan on Tuesday after being part of the country's run to the European Championship last-four a month ago.

“Some people may ask why should I come (to the Olympics) and not rest a little bit, but I say, ‘No,'" the Leipzig forward said. “This is a big opportunity for us.”