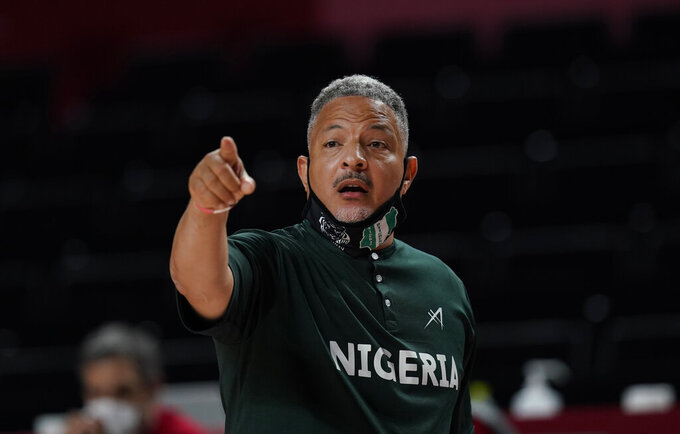 SAITAMA, Japan (AP) — Nigeria assistant coach Ruthie Bolton could only watch and yell at the television in a Japanese hotel room Tuesday as the Nigerians battled the U.S. women’s basketball team.

The former U.S. Olympian and two-time gold medalist has been quarantined since arriving in Japan last Friday, stuck in a hotel unable to join her team.

Bolton doesn't have COVID; she has an Olympic credentialing issue.

“From a distance watching from afar really was hard playing the team I played for, USA ...,” Bolton told The Associated Press in a phone interview. “I wanted to be there. I played for the USA team.”

That is an understatement. She did a lot more than just play.

Now 54, Bolton won Olympic gold medals with the U.S. in 1996 and 2000 along with a world championship. Her former Olympic teammate Dawn Staley is coaching the Americans, the first Black female head coach the U.S. women have ever had. Bolton has been an assistant the past six months with Nigeria.

Tuesday was a game Bolton had circled.

But instead of helping Nigeria coach Otis Hughley Jr. on the sidelines, Bolton watched the game with two other assistants and the team doctor from their hotel — unable to yell loud enough for the guards to hear her wanting them to pick up Sue Bird quickly on defense.

“I know the circumstances,” said Bolton, who has been spending the time reading and writing scouting reports from watching games on TV. “I know that it was nobody on the team’s fault. It was just one of those things ... it was tough.”

Hughley, who handled the game by himself, had been hopeful Tuesday morning Bolton and the others would be credentialed in time to work the game in person. Now the Nigerians have until Friday's game against France to straighten out the credential paperwork.

“It’s like starting your boxing career and they tell you you’re fighting Muhammad ALI (USA) in his prime,” Hughley said. “Now that ain’t something you’re looking for. ‘I want to box, but I don’t want to box that bad’.”

Nigeria is trying to become the first African nation to win an Olympic game in women’s basketball since 2004 when the team went 1-5 in Greece. No team from the continent has won a game since. That's one reason why Hughley wanted her on his coaching staff.

He was an assistant coach at Auburn when he saw the SEC Storied documentary “Mighty Ruthie” about Bolton's life as the 16th of 20 children from McLain, Mississippi, and a survivor of domestic violence in her first marriage.

After Nigeria clinched its second Olympic berth ever, Hughley called and offered the former Auburn point guard and Women’s Basketball Hall of Famer a spot on his staff.

While he valued her basketball IQ, Hughley also wanted Bolton to share her life story, connect with the players. Bolton accepted the job and has been working with the Nigerians the past six months, including games in Belgium and Spain in February.

Hughley credits Bolton with creating a closeness and chemistry among the players.

“No way you can buy it. Ruthie’s presence, man, Ruthie is the embodiment of what they're going through now, what they hope to live through later and you look at those girls, they look at Ruthie and say, 'When I grow up, I want to be like that," Hughley said.

Nigerian captain Adaora Elonu agrees, saying they learned so much about her from the documentary. “We're like, ‘This is our coach?’ It's incredible to have her with us.”

In Japan, it's been via video chats and messages.

Added Elonu: “Hopefully she'll be with us soon."

Bolton, who enjoys working out and isn't shy about showing off how fit she is, apparently has a green Nigerian shirt ready for when that time comes — thanks to a pair of scissors.

“I’ve seen that so many times,” Staley said of her former U.S. teammate when the teams were in Las Vegas. “I walked up to her, I hugged her, and I was just like, ‘Only Ruthie would cut up a nice Nigerian T-shirt for a fashion statement.’”

Bolton wants to make another kind of statement at the Tokyo Games.