Whoa, Nelly! A major title for Korda and No. 1 world ranking 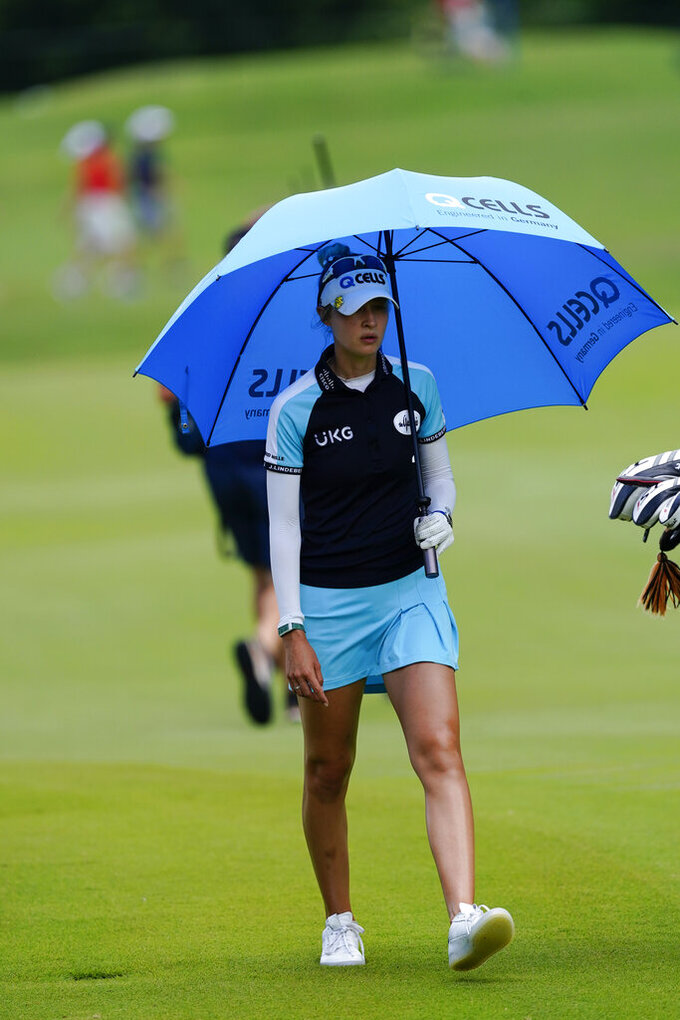 Nelly Korda of the U.S. paces off the distance on the fairway of the second hole, during the final round of play in the KPMG Women's PGA Championship golf tournament Sunday, June 27, 2021, in Johns Creek, Ga. (AP Photo/John Bazemore) 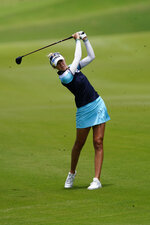 JOHNS CREEK, Ga. (AP) — First came the tears when Nelly Korda hugged her older sister and didn't want to let go. That was followed by the spray of champagne on the 18th green to celebrate a day that will be hard for her to top even at age 22.

With one round, she became a major champion for the first time and reached No. 1 in the world.

Just like her performance Sunday in the KPMG Women's PGA Championship.

Korda powered her way to a pair of eagles that wore down Lizette Salas at Atlanta Athletic Club and put an American atop the world ranking for the first time in seven years.

Korda nearly holed out with a 7-wood from 243 yards for a tap-in eagle. She seized control by using her length from that graceful swing, leaving her a 6-iron into the par-5 12th hole that narrowly cleared the water and set up an 8-foot eagle putt.

The final stroke was a 15-foot par putt for a 4-under 68 and a three-shot victory over Salas.

“The past few days, the battle with Lizette, it's been a lot of fun. It's been stressful. I think it's had everything,” Korda said. “But I just can't believe it. I'm still in shock.”

At 19-under 269, she tied the Women's PGA record to par last matched by Inbee Park at Westchester Country Club in 2015.

Korda won for the second straight week — her third LPGA title this year — and it was enough to become the first American at No. 1 in the women's world ranking since Stacy Lewis in 2014.

Jin Young Ko had held the No. 1 spot for nearly two years.

Her only mistake came when it didn't matter.

Korda seized control with a 6-iron she caught heavy enough to worry it might not clear the pond on the par-5 12th and was relieved when it rolled out to 8 feet for eagle. That turned into a three-shot swing when Salas — who spent the weekend hitting hybrids on holes that Korda had short irons — hit wedge over the green into a bunker and made bogey.

“That was my favorite wedge, too,” Salas said. “The good thing is I was committed to that shot. This wind is pretty swirly. Maybe a little drop-kick, I don't know. Got a few extra yards out of it."

Korda made an 18-foot birdie putt on No. 14 to stretch her lead to five shots with four holes to play, only to end 49 consecutive holes without a bogey by hitting into the water on the par-3 15th for a double bogey.

But she steadied herself with a pair of pars and played it conservatively down the par-5 closing hole over water.

Korda's older sister, Jessica, was among the first to embrace her on the 18th green as the emotions began to emerge.

Jessica finished much earlier — they shared a hug as Nelly was teeing off and Jessica was making the turn — though the older sibling had another reason to celebrate. She easily held down the fourth American spot for the Olympics in Japan.

It was a big celebration for one of the top sporting families in the world. The Korda sisters each have six LPGA victories. Their younger brother, Sebastian, is at Wimbledon this week as the 50th-ranked player in men's tennis and has a chance to join them in Tokyo for the Olympics.

Their father is Petr Korda, who won the Australian Open in tennis in 1998.

“You don’t realize it until someone really talks about it because we’re always so in the zone,” Korda said of the family success. “We're always just striving to achieve more, and for our family just to back each other through every situation ... it's so surreal.”

Salas, who felt a burden lifted this week when she opened up about emotional struggles exposed during the COVID-19 pandemic, closed with a 71 and made Korda work for it.

They started the final round tied for the lead, five clear of anyone else, and it was up for grabs until the pivotal 12th hole.

Korda took the lead for good with a birdie on the third hole. Even after he eagle on the fifth, Salas bounced back with a tee shot on the reachable par-4 sixth that set up birdie to close the gap to one shot.

But it all turned so quickly. Salas had a 15-foot birdie putt on the 10th to tie for the lead. Two holes later, she was four shots behind against a player who was not about to let Salas back in the game.

“She played great, and there’s nothing I could have done differently to change her game plan, and that says a lot about her,” Salas said. “I’m just lucky she’s on the American side for that Solheim Cup.”

Korda is the first American to win a major since Angela Stanford three years ago in the Evian, and it extended a big year for U.S. women's golf. Americans have won six times on the LPGA Tour this season. South Korea and Thailand are next with two apiece.