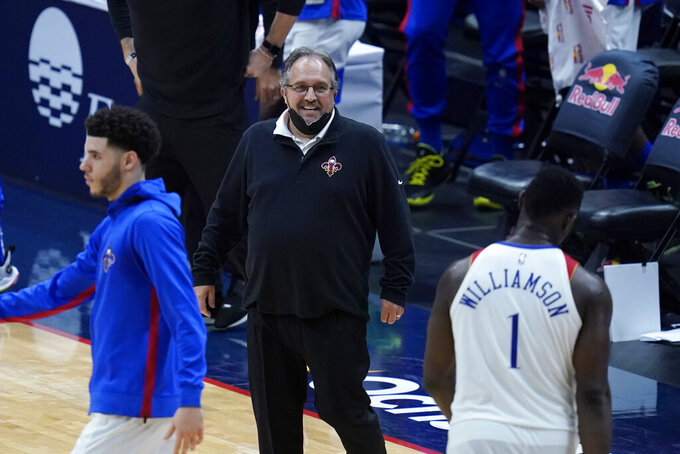 New Orleans Pelicans head coach Stan Van Gundy reacts during a late run in the second half of an NBA basketball game against the Golden State Warriors in New Orleans, Tuesday, May 4, 2021. The Pelicans won 108-103. (AP Photo/Gerald Herbert)

If anything, the 20-year-old All-Star put the club on notice about the urgency with which he'd like New Orleans to approach this offseason.

“Doing the same thing over and over and expecting a different result is kind of insane, so I’m not going to going to sit here and say we’re close,” Williamson said. “The reality of it is it was very disappointing not to be a part of the play-in tournament and stuff. But we just got to come in and just be better. That’s just me being real.”

Those comments ran somewhat counter to the narrative promulgated by Pelicans chief basketball executive David Griffin, who saw his team as one that looked far more competitive that its 31-41 record during coach Stan Van Gundy's first season with the club.

The Pelicans blew 14 double-digit leads and had a rash of late-season injuries to key players, including Williamson, before winding up just two games behind San Antonio for the final Western conference play-in spot.

“We were very, very close,” Griffin asserted. “In those games that we lost and those leads that we blew, we were right there at the end of those games. ... Before all the injuries, I think our team really believed we were going to achieve what we wanted to, which was to go into the postseason and be a threat.”

The Pelicans beat several the NBA’s best-performing teams this season, including Utah, Philadelphia, Phoenix and Milwaukee. New Orleans also was without up to four starters for most of its last six games, including top scorers Williamson (left hand) and Brandon Ingram (left ankle), as well as center Steven Adams and guard Lonzo Ball.

They lost five of those last six games — a tailspin ending to a season in which 20 losses came by eight or fewer points and four came in overtime.

So Griffin concluded, “What we’re not going to do is overreact and give up on the nucleus.”

Griffin reiterated that his immediate goal is to improve how the team supports Williamson and Ingram.

Williamson, in his second pro season — and first full season after appearing in just 24 games as a rookie — blossomed into a historically efficient significant scorer who also could handle the ball well enough to run the offense like a 275-pound point guard. He averaged 27 points per game while hitting 61 percent of his shots.

While Van Gundy's first season fell short of expectations, Griffin made clear he wasn't about to judge a new staff on one season played during a pandemic with a relatively young roster.

The pandemic compressed the schedule, which, combined with safety protocols, gave Van Gundy and his staff much less practice time than in a typical season to implement his scheme and work with players individually, Griffin said.

Griffin praised Van Gundy's vision for “point-Zion,” an offensive scheme used increasingly throughout the season in which Williamson served as the primary ball-handler.

Griffin recalled that when interviewing nine coaching candidates last year, “Stan was the only one who saw point-Zion in Zion.”

The scheme allowed Williamson to exploit his explosiveness to the hoop in a way that was harder for him to do as a rookie when he was primarily in the post.

Now Griffin and Van Gundy are talking about continuing to explore the bounds of “point-Zion" moving forward.

“I still don’t think we’ve reached the extent of what he is able to do,” Van Gundy said. “He’s a unique talent and it’s a responsibility of ours to develop that."

Starting point guard Lonzo Ball and reserve swing player Josh Hart will be restricted free agents, meaning the Pelicans can keep them by matching offer sheets they sign from other clubs. But whether it makes financial sense to do that remains to be seen.

“We feel very, very strongly about both of those players," Griffin said. "We hope they feel the same about us.”

“My shooting picked up from all levels of the court,” said Ball, who also showed good chemistry with Williamson on the break, sometimes sending him lobs from near half court and beyond.

“I think I had a pretty good year," Ball said. "Obviously, I would love to be back.”

Hart averaged 9.2 points and eight rebounds, but missed the last 25 games of the season because of a surgically repaired hand injury.

Griffin used the term “optionality” to describe the Pelicans' potential to add another prominent veteran this offseason. As possible trade assets, New Orleans has multiple first-round draft picks in upcoming seasons, including two acquired from the Lakers (2022 and 2024 or 2025) as part of the Anthony Davis trade.

“Perhaps our draft pick will go to work for us in finding another veteran piece who has more of that winning mettle," Griffin said.

Griffin also noted the club also is in a healthy financial position because Williamson and several other regulars are on rookie contracts.

“We’re going to be able to be aggressive if the right fit exists," he said. "You could see us do virtually anything.”