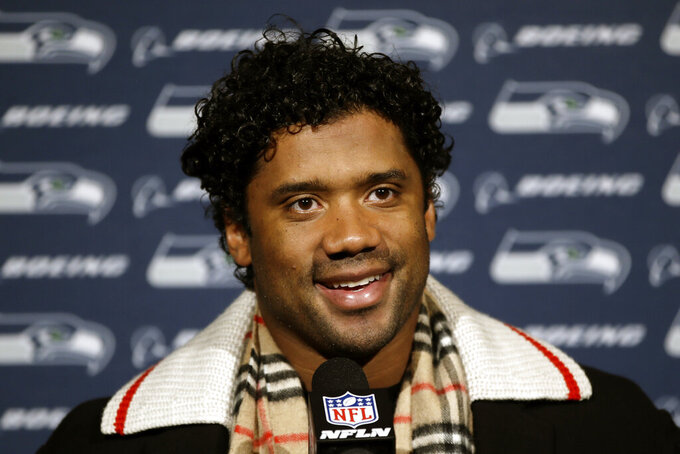 FILE - In this Nov. 24, 2019, file photo, Seattle Seahawks' Russell Wilson speaks during a news conference after an NFL football game against the Philadelphia Eagles in Philadelphia. Seahawks quarterback Russell Wilson, soccer star Megan Rapinoe and three-time WNBA champion Sue Bird will preside over The ESPYS two-hour broadcast airing June 21 on ESPN. All three live in the Seattle area. Rapinoe and Bird are partners who share a household, which conveniently eases some logistics. Wilson’s singer-wife, Ciara, is likely to make an appearance, too. (AP Photo/Matt Rourke, File)

LOS ANGELES (AP) — It’s a way different kind of year, and so The ESPYs will be, too. For the first time, the show will feature three hosts in remote settings and a changed focus. Instead of honoring the past year's top athletes and moments in sports, the show is celebrating heroism and humanitarian aid.

Seahawks quarterback Russell Wilson, soccer star Megan Rapinoe and three-time WNBA champion Sue Bird will preside over the two-hour broadcast airing June 21 on ESPN. All three live in the Seattle area. Rapinoe and Bird are partners who share a household, which conveniently eases some logistics. Wilson’s singer-wife, Ciara, is likely to make an appearance, too.

“We liked the idea of having athletes from diverse sports that represent something for every fan,” show producer Jeff Smith said by phone. “We’re finding ways to make this feel really connected to the audience. They’re so ready to reach out to this community.”

It's quite a departure from the red carpet strutting and 5,000 audience members at the show's longtime home in Los Angeles. Instead of its usual July date during baseball's All-Star break, the show has been rescheduled and re-imagined as a result of the coronavirus pandemic.

Smith said there's been a lot to learn in assembling a pre-produced show with everyone in different locations.

“Typically, we are all shoulder to shoulder and looking through cuts and arguing through story ideas,” he said. “We found a different way to connect with each other.”

Shortly before the U.S. shut down because of the coronavirus, the show suffered a blow when longtime executive producer Maura Mandt died unexpectedly at age 53 on Feb. 28.

“I wish we could have done this show together because she would have a really interesting perspective on how we’re doing this,” said Smith, who worked with Mandt at her production company. “This is the first one of its kind. Maura’s signature will always be on this show.”

The Arthur Ashe Award for Courage, the Pat Tillman Award for Service and Jimmy V Award for Perseverance are among the honors to be presented. But there won't be the usual long acceptance speeches read off the teleprompter.

The producers hope to show the winners getting a call informing them of the honor at the same time the audience finds out. That involves colluding with family and team members to lure them to a video screen at the appropriate moment.

“We really love this sort of pure reaction,” Smith said. “We found ways to really be able to capture it.”

The ESPYs are typically defined by viral moments rather than viewers remembering who won what. Without a live show, Smith said he still aims to mine those nuggets.

“We're finding access to athletes and celebrities that in some way will surprise the audience,” he said.

Comedy and music are always part of the show, and Wilson, Rapinoe and Bird will get a chance to show off a sense of humor.

However, the host's usual opening monologue poking fun at athletes and controversy doesn't quite fit with this year's theme. In a different time, the Houston Astros cheating scandal would have been ripe for the picking.

“On this side of the pandemic, it's hard to really care about that,” said Rob King, ESPN senior vice president and editor at large.

The show is taking a forward-looking approach rather than lament what the world has endured during the COVID-19 crisis.

“In the not-too-distant future after the show airs, we’ll see a return to live sports that will drive a sense of hope," King said. "We hope to have this show be really reflective of that.”