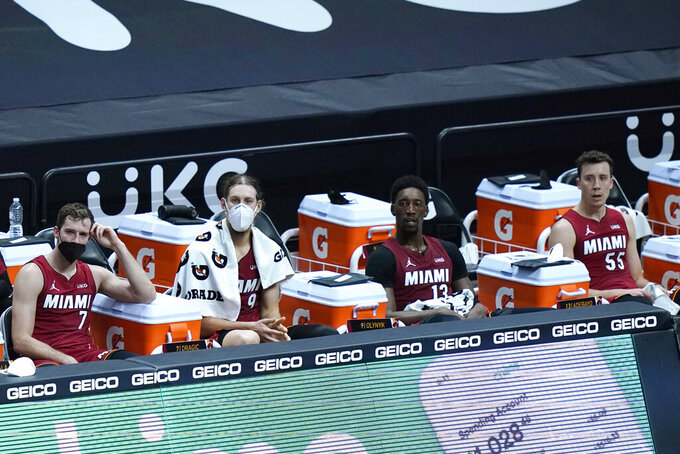 MIAMI (AP) — The Washington Wizards are now assured of going at least 11 days between games, after yet another postponement while the team deals with COVID-19 issues.

The Wizards' game that was scheduled to be played Wednesday in Charlotte is now off, the NBA said Monday. That is the 14th postponement since Jan. 10 — and no team has had more games called off than the Wizards.

Washington has seen five consecutive games pushed back, and the earliest the Wizards will play again is Friday at Milwaukee. The Wizards revealed late last week that six players were positive for COVID-19 and three others were ruled out because contact tracing said they may have been exposed to the virus.

Pushing the Wizards' return back appears to make sense for multiple reasons, including the fact that the team has been unable to even practice. Some players returned to the team facility this weekend for individual work, but what would have been a five-game, eight-day road trip — had the Charlotte game been played as planned — seemed highly problematic given the lack of practice time.

Also Monday, the game in Miami between the Heat and the Detroit Pistons was pushed back five hours, with the league and teams making that decision so additional COVID-19 testing could be processed. The game was scheduled to begin at 3 p.m. EST but was pushed back to 8 p.m. and Heat coach Erik Spoelstra said the rare afternoon start, combined with the extra time needed to process additional tests, led to the delay.

“We have the saying: ‘Expect the unexpected,’” Spoelstra said. “It's turned into ‘Expect the expected' because basically, this is our world right now. There are unpredictable things that are happening virtually daily. And the teams and players and staff that can adapt the best to these conditions, I think they have the best chance of being stable and having success.”

Denver announced that Michael Porter Jr. will miss a 10th consecutive game because of virus protocols on Tuesday, when the Nuggets face Oklahoma City. Porter had a 30-point, 10-rebound game on Dec. 29; he hasn't played since.

“He's a big part of what we're trying to do here,” said Denver coach Michael Malone, who is hoping to have Porter back by the end of the week.

The 14 postponements in a little over a week have now involved 19 of the league's 30 teams. One of those matchups was to have taken place on Monday’s Martin Luther King Jr. Day schedule — Cleveland at Washington.

The NBA has added more testing and stiffened protocols in recent days with the hopes of getting as many games in as possible.

“I give our guys a lot of credit,” Malone said. “Every day the NBA is coming out with new protocols. We all have to get tested twice a day. Players, on game days, I think it's three times a day. They don't want you leaving your house. On the road, you're not leaving your hotel. These are really tough times and I give our players credit because they're handling it as well as can be expected.”

Phoenix played Monday at Memphis, ending a weeklong unplanned break for the Suns. Phoenix had three games postponed because of virus-related issues, which can include players dealing with positive COVID-19 tests, inconclusive tests or having to quarantine because contact tracing indicated they could have been exposed to someone who tested positive.

There have been a total of 15 games called this season for coronavirus-related reasons so far. In addition to the 14 in recent days, the other was a planned Dec. 23 matchup between Oklahoma City and Houston that was pushed back because the Rockets did not have enough available players.

Delaying the Heat-Pistons start time did not affect Detroit’s travel schedule. The team was already planning to remain in Miami until Tuesday.

Postponed games, when possible, will be made up in the second half of the season, which will take place from March 11 — the one-year anniversary of last season shutting down because of the pandemic — through May 16. The league has not yet released that half of the schedule and isn’t expected to do so until late February at the earliest.

Players who test positive have to undergo a battery of exams before being cleared to return to play, such as cardiac tests. Those ruled out by contact tracing have been able, in most circumstances, to return after a quarantine period provided they continue to test negative for COVID-19.