Women take their shots at Olympic medals at Kasumigaseki 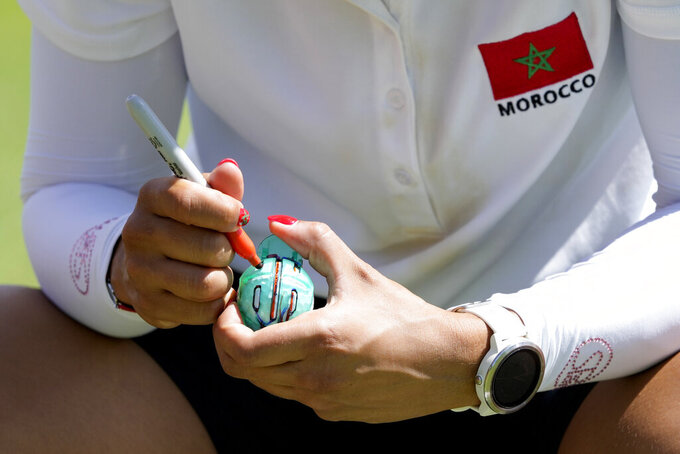 Maha Haddioui, of Morocco, marks her golf ball during a practice round prior to the women's golf event at the 2020 Summer Olympics, Tuesday, Aug. 3, 2021, at the Kasumigaseki Country Club in Kawagoe, Japan. (AP Photo/Andy Wong)

Notes: The nature of the field is entirely different from the men last week. All three medalists from Rio de Janeiro are back for their second Olympics — none of the 2016 male medalists qualified this time. There are 29 women in the field who competed in Rio, compared with nine men. ... The U.S. and South Korea are the only countries with the maximum four players. Lexi Thompson is the only returning American. She tied for 19th in Rio. Inbee Park and Sei Young Kim return for South Korea. Kim tied for 25th in Rio. ... Nelly Korda is the No. 1 player in the world and coming off her first major a month ago in the KPMG Women's PGA Championship in Atlanta. ... Nasa Hataoka is Japan's highest-ranked player. ... Minjee Lee of Australia is coming off her first major at the Evian Championship two weeks ago. The LPGA Tour has its fifth and final major in two weeks at the Women's British Open. ... Charley Hull and Georgia Hall opted out for Britain. Hall tied for 14th and Hull tied for 17th in a joint LPGA and Ladies European Tour event last week in Northern Ireland. ... U.S. Women's Open champion Yuka Saso is playing for the Philippines. Because she just turned 21, she can decide after this year whether to represent Japan, her father's native country.

Notes: The 66-man field includes 19 players who competed in the Tokyo Olympics. ... Bryson DeChambeau returns from a positive COVID-19 test that knocked him out of the Olympics. Jon Rahm, who also missed the Olympics because of a positive test, is taking another week off. ... Collin Morikawa and Billy Horschel won the previous two World Golf Championships this year. They will try to join Tiger Woods, Phil Mickelson and Dustin Johnson as the only players to win more than one WGC title in the same year. Woods did it six times. ... Morikawa is the sixth player to win a major and a WGC in the same year. Woods did that eight times. ... Justin Thomas won last year for his second WGC title. ... Adam Scott is in the field and on the bubble at No. 123 to finish among the top 125 in the FedEx Cup standings. ... Olympic golf medalist Xander Schauffele won for the first time since the 2019 Sentry Tournament of Champions. Gold medalists get into the four majors and The Players Championship the following year, but they are not exempt for Kapalua. ... Ian Poulter moved to No. 50 last week to qualify for the field. He fell out of the top 50 by one spot this week.

Notes: The field features three Olympians in Mito Pereira of Chile, Rafael Campos of Puerto Rico and Thomas Pieters of Belgium. Pereira, a three-time winner on the Korn Ferry Tour this year, was in the playoff for the bronze medal. ... This is the only PGA Tour event that uses the modified Stableford scoring system — 2 points for a birdie, 5 points for an eagle, 8 points for an albatross. A bogey is a loss of 1 point, and a double bogey or worse loses 3 points. ... Collin Morikawa earned his first PGA Tour title two years ago at the Barracuda Championship. Now he is a two-time major champion who is No. 3 in the world ranking. ... Rickie Fowler is No. 125 in the FedEx Cup and chose not to play this week. The next tournament will be his one chance to finish in the top 125 and qualify for the postseason, along with a spot in The Players Championship. ... Rory Sabbatini won the silver medal at the Olympics. He is not playing Barracuda and could lost his full PGA Tour card if he doesn't play well next week. ... The winner earns a spot in the PGA Championship next year but not the Masters because it is held opposite a World Golf Championship. ... This will be the sixth of seven tournaments in California this year. The last one is in Napa in September.

Notes: Zhang will try to become the first back-to-back winner of the U.S. Women's Amateur since Danielle Kang in 2011. ... Westchester was previously the site of a PGA Tour event, last played in 2007 when the FedEx Cup postseason began. It most recently hosted the KPMG Women's PGA Championship in 2015. ... The winner is exempt into the U.S. Women's Open next year at Pine Needles. ... Because of the COVID-19 pandemic, last year had an all-exempt field without qualifying. This year, the USGA received a record 1,560 entries. ... The last U.S. Women's Amateur in New York was in 2014 when Kristen Gillman beat Brooks Henderson at Nassau Country Club. ... The championship dates to 1895.

Notes: The field includes three players in Tokyo last week for the Olympics — Ryan Fox of New New Zealand, Jorge Campillo of Spain and Ashun Wu of China. Campillo was a last-minute addition when Jon Rahm had to withdraw because of a positive COVID-19 test. ... The tournament began last year when the European Tour was trying to navigate its way through the COVID-19 pandemic. ... Horsfield's victory last year was part of what propelled him to a spot in the U.S. Open. He eventually had to withdraw because of a positive COVID-19 test. ... This is the fifth of six consecutive European Tour events in the U.K. That ends in two weeks when the tour goes to the Czech Republic.