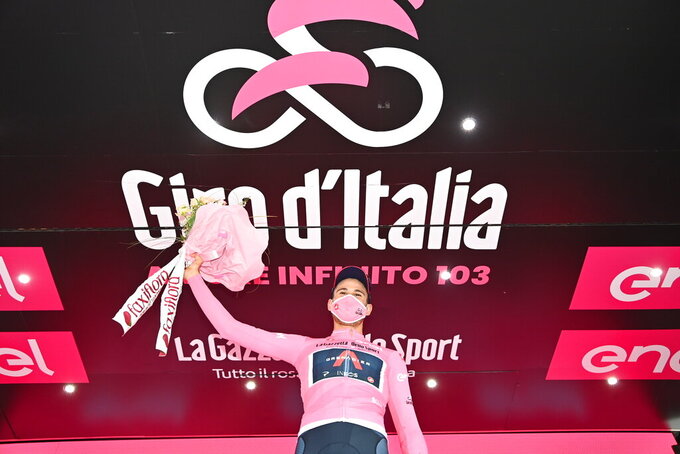 Italy's Filippo Ganna wears the pink jersey of the race overall leader as he celebrates on the podium after winning the opening stage of the Giro d'Italia, tour of Italy, cycling race, an individual time trial from Monreale to Palermo, Italy, Saturday, Oct. 3, 2020. (Gian Mattia D'Alberto/LaPresse via AP)

PALERMO, Sicily (AP) — Newly crowned world champion Filippo Ganna, competing in his first Grand Tour, stormed to a dominant victory in the opening stage time trial of the rescheduled Giro d’Italia on Saturday in front of his home fans.

Ganna, an Italian who rides for Ineos Grenadiers, beat Joao Almeida by 22 seconds on the 15.1-kilometer (9.4-mile) downhill time trial in Palermo.

Mikkel Bjerg was third with the same time as Almeida.

Geraint Thomas, who also rides for Ineos Grenadiers, was fastest of the overall favorites. The British rider was fourth, 23 seconds behind Ganna but at least 26 seconds ahead of his main rivals.

Ganna recently became the first Italian to win the men’s time trial at the road cycling world championships, which were also held in Italy.

The 24-year-old will now swap that rainbow jersey for the pink colored one that the overall leader of the Giro wears.

“Today I knew was one of the hot favorites but I tried to stay calm,” Ganna said. “We did it, what a great result and what a thrill to wear the Maglia Rosa on my first Giro, which is a good omen for the rest of the race.”

There were several crashes on the course, with the riders affected by strong winds. Victor Campenaerts also complained about the road surface after crashing but managing to finish the stage with a bloodied leg.

Miguel Angel Lopez was taken away in an ambulance after he fell.

Sunday’s second stage also takes place on the island of Sicily and is a hilly 149-kilometer (92.6-mile) route from Alcamo to Agrigento.

The race ends on Oct. 25 with an individual time trial in Milan.

The Giro was originally scheduled to start with three stages in Hungary and run from May 9-31, but it was postponed because of the coronavirus pandemic.