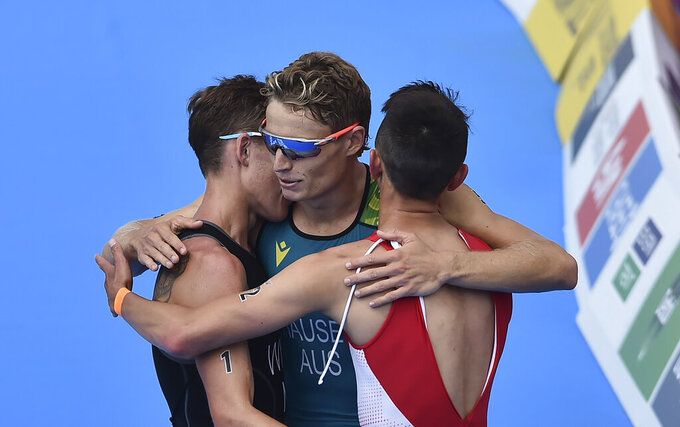 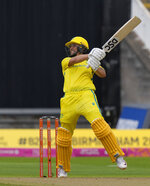 Yee and Wilde were almost level during the concluding 5-kilometer run in the men's triathlon when the latter learned he had been handed a 10-second penalty for an infraction at the end of the cycling leg. Rather than challenge for the finish line, Wilde slowed so Yee could cross first and celebrate his victory.

“It’s just wicked,” said Yee, an Englishman who won a silver medal for Britain at last year's Tokyo Olympics. “This is my first Commonwealth Games (and I’m) just soaking it up. (There are) thousands of people on the course and I just wanted to enjoy it.”

The 24-year-old Yee was running nearly even with Wilde when the New Zealander learned about the sanction for failing to store his helmet correctly after the cycling leg. Competitors are not allowed to unstrap their helmets before their bike is racked.

Although he later disputed the ruling, Wilde relinquished his lead and applauded as Yee passed by near the finish. Wilde settled for a silver medal.

“I felt it was a little unfair," Wilde said of the penalty. "But that’s racing at the end of the day.”

Yee was in 16th place after the swim leg, but rode strongly to start his favored running leg in fifth and within reach of the leaders. Wilde finished behind Yee in Tokyo also, taking the triathlon bronze medal.

On a historic day at Edgbaston, Australia won the first women’s cricket match ever played in the Commonwealth Games by three wickets over India.

Prior to the match, Indian cricket great Sachin Tendulkar said he hoped the inclusion of the sport would take “our beautiful game to newer audiences.”

It was a great start.

An early highlight saw Australia wicketkeeper Alyssa Healy become the first player of either sex to claim 100 dismissals in the Twenty20 format of the sport.

Healy's joy did not extend to batting, with the opener dismissed on the second ball of the Australian innings.

But with Ashleigh Gardner scoring an unbeaten 52 runs, the Australians regrouped from early trouble to triumph with one over remaining.

Fresh from her stunning debut at the world swimming championships in June, Summer McIntosh of Canada was dominant in winning her heat in the 400-meter individual medley.

Olympic champion Ariarne Titmus, who skipped the worlds in Budapest, was an easy winner in her heat in the 200 freestyle in 1:55.68. The Australian will swim in the final on Friday.