$11B for transit would aid bullet train, move Olympic crowds 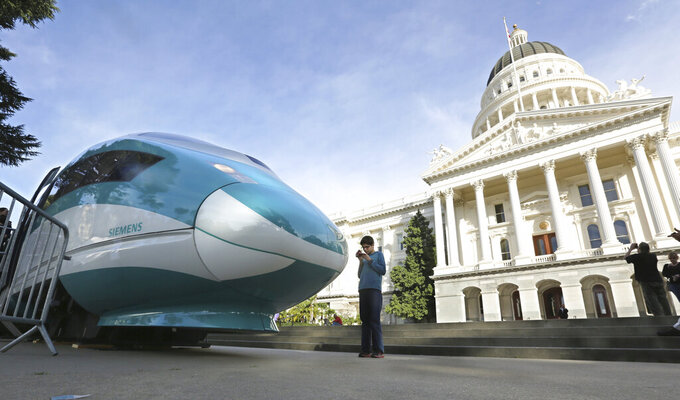 FILE - In this Feb. 26, 2015 photo, a full-scale mock-up of a high-speed train is displayed at the Capitol in Sacramento, Calif. On Friday, May 14, 2021, Gov. Gavin Newsom proposed spending $11 billion on transportation improvements, half of it for a troubled bullet train intended to link California's major metropolitan areas eventually and projects supporting the 2028 Summer Olympics in Los Angeles. The Democratic governor billed the proposal as a way not just to repair decaying roads and bridges but to "build a modernized transportation system for the next century." That also includes improving public transportation and the state's major ocean ports and encouraging more use of zero-emission vehicles. (AP Photo/Rich Pedroncelli, File)

SACRAMENTO, Calif. (AP) — Gov. Gavin Newsom on Friday proposed spending an additional $11 billion on transportation improvements, much of it for a troubled bullet train intended to eventually link California's major metropolitan areas and for projects supporting the 2028 Summer Olympics in Los Angeles.

The Democratic governor billed the proposal as a way to not just repair decaying roads and bridges, but to “build a modernized transportation system for the next century.”

The plan also includes improving public transportation and encouraging more use of zero-emission vehicles along with $4.2 billion for the state's high-speed rail project, using bond money that voters approved in 2008 to eventually link the Los Angeles and San Francisco Bay areas.

Officials said it's enough money to complete construction in the more sparsely populated Central Valley, as well as do advance work on service between Merced and Bakersfield and fund planning and project design for the rest of the project.

The influx of money from the state could potentially draw federal funds now that a much more sympathetic Democratic president is in the White House.

Newsom said he expected President Joe Biden’s administration to reverse the effort of former President Donald Trump and the Republican-controlled Congress to cut off federal funding for high-speed rail.

“Those dollars are coming back into the state, reinforcing we have a real federal partner,” Newsom said in his budget briefing.

Federal Railroad Administration Deputy Administrator Amit Bose said federal and state officials “have engaged in productive settlement negotiations” involving the federal funds and “we hope to be able to reach a final settlement in the near future.”

The authority's business plan calls for testing trains by 2026 and starting service between Merced and Bakersfield by 2029. It anticipates environmental approval for the 500 miles between Los Angeles and San Francisco by 2023, but completion of the full line depends on funding and other unknowns.

Critics have derided the Central Valley segment as a “train to nowhere,” but supporters say it’s a necessary test and precursor to linking more populated areas.

Newsom's proposed budget also calls for $1 billion to “move people throughout the state seamlessly in time for the Los Angeles Olympics in 2028.” Known for its notorious gridlock, LA is in the midst of a rail-building boomlet in advance of the crush of visitors in 2028.

After the city landed the Games in 2017, Mayor Eric Garcetti proposed a string of projects that would help shuttle spectators to venues throughout the region. He has described it as “building a countywide transportation network that includes subway, light rail, bike facilities and highway bottleneck improvements.” The core of the plan involves extensions of subway lines.

The money would specifically go to the state's transit and intercity rail program for projects such as those in LA Metro's Twenty-Eight by ’28 Initiative, said California State Transportation Agency spokesman Garin Casaleggio. The agency will solicit projects later this year and expects to award the funding by April 2022, he said.

Newsom released the transportation details as part of his revised budget plan, capitalizing on an unprecedented $100 billion surplus from a state tax windfall and federal stimulus money. Lawmakers have until June 15 to approve a spending plan in time for the July 1 start of the new fiscal year.

The budget also proposes 548 new state and contract engineering positions tintended to let the California Department of Transportation take advantage of lower construction bids from the pandemic. Those lower costs largely offset lower gas tax revenues from reduced travel during the pandemic, the budget says, and will allow CalTrans to reduce its repair and maintenance backlog.