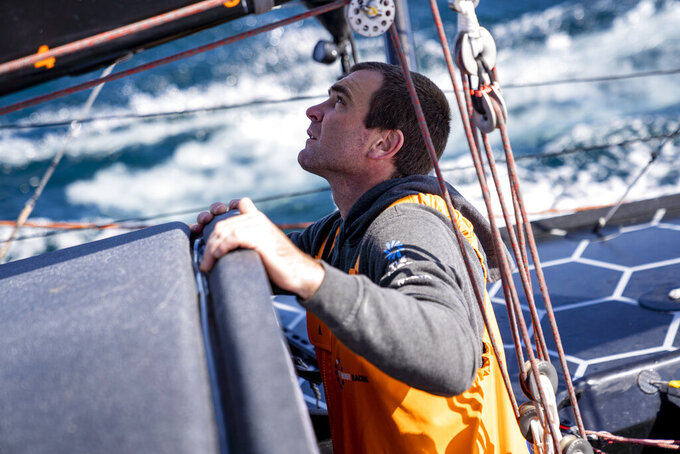 In this photo provided by the 11th Hour Racing, Charlie Enright trains in France on March 25, 2021. After sailing around the world together twice, Brown alums Enright and Mark Towill are taking on different roles as 11th Hour Racing heads back out to sea to begin preparations for the 2022-23 Ocean Race. Towill will move off the boat to lead the team as CEO and Enright will skipper the crew, starting with the Ocean Race Europe, which begins Saturday. (Amory Ross/11th Hour Racing Team via AP)

After sailing together in two round-the-world races, Brown alums Charlie Enright and Mark Towill are taking on different roles as 11th Hour Racing heads back out to sea to begin preparations for the 2022-23 Ocean Race.

Towill will move off the boat to lead the team as CEO and Enright will skipper the crew, starting with the Ocean Race Europe that starts Saturday.

Towill said he’s taking on the new role because while the size of the crew is decreasing due to a change in the class of boat, the scale of the overall operation has increased because 11th Hour Racing is designing and building a new boat, a foiling IMOCA 60, for the first time. 11th Hour Racing will use only a four-person crew compared to the nine needed to sail the old class, which was a supplied one-design boat.

“It’s an exciting challenge that I’ve welcomed,” Towill said from his home in Hawaii during a recent video interview. “It’s something I’ve been involved with in our last two campaigns as well but I’ve also been on board sailing so it hasn’t been my full-time focus. The scale and scope of what we’re doing has definitely expanded.”

When the coronavirus pandemic shut down most global sports, the start of the Ocean Race was pushed back a year to October 2022. Towill and Enright finished fifth in the last two editions of the Volvo Ocean Race, which is now the Ocean Race.

The last time 11th Hour Racing sailed in a competitive race, Enright and Pascal Bidégorry of France co-skippered the team’s current IMOCA 60 in the Transat Jacques Vabre from France to Brazil in late 2019.

“I’ve certainly gone to sea without Mark, but it will be a different feeling aboard for sure,” Enright said in the same video interview, while quarantining in France ahead of the Ocean Race Europe. “There’s a lot of new feelings — sailing with only two people on board was new, the class of boat was new, the autopilot was new, we’re in this whole new world. We’ve kind of established some different roles. The scope of what we’re doing has changed a tremendous amount."

The team will sail its current IMOCA 60 in the Ocean Race Europe, which begins Saturday in Lorient, France, with stopovers in Cascais, Portugal, and Alicante, Spain, before finishing in Genoa, Italy, in mid-June.

The IMOCA 60 is a development class that can be sailed by one person in circumnavigations. 11th Hour Racing will sail with four crew: Enright, Bidégorry, Justine Mettraux of Switzerland and Simon Fisher of Britain. Amory Ross of the United States is the onboard reporter who can contribute to sailing the boat.

The IMOCA 60s have an autopilot steering system that frees up the crew to trim sails and navigate.

11th Hour Racing is building a new IMOCA 60 that is scheduled to be finished in July.

After that, the team will enter three races with two boats. Fisher and Mettraux will sail on the current IMOCA and Enright and Bidégorry will sail the new boat in the Rolex Fastnet, the Défi Azimut and the Transat Jacques Vabre.

Enright hopes for a smooth return to competitive sailing, with few worries.

“It’s like riding a horse, right?” he said. “I’d be lying if I said none. It’s been a while since we’ve done it. Sitting here in quarantine on my couch, the training hasn’t been excellent. I’m sure it will all come back and we’ve got high hopes.”

The team sailed its current IMOCA 60 from Europe to Rhode Island and back to Europe last year.

After sailing displacement monohulls in the last two Volvo Ocean Races, 11th Hour Racing’s sailors are getting used to sailing foiling monohulls. Foiling has become the rage in sailing, especially in round-the-buoys races like the America’s Cup and SailGP.

“It’s uncomfortable, certainly,” Enright said. “The America’s Cup guys, the SailGP guys, they don’t live on a foiling platform. They don’t sleep on it. We’re attempting to foil for 20 days on end.”

Unlike the America’s Cup and SailGP boats, the IMOCA 60s don’t have foils on the rudder.

“It’s like semi-foiling and it can be pretty rough in a mean sea state,” Enright said.

“Versatility is a big thing with foils because you need to be able to tame the beast if you will,” he said. “In the Southern Ocean you might be retracting those foils and just trying to survive and the priority could be reliability. But then you also need the top-end speed in the tropics and the 12 knots and the flat water to really haul off the miles and leg out on the competition. Getting that dynamic right is going to be really important.”

The team is committed to ocean health, so it has explored alternative materials and various processes to reduce the impact of building a boat, including trying flax as a material for some hatches as opposed to carbon fiber.