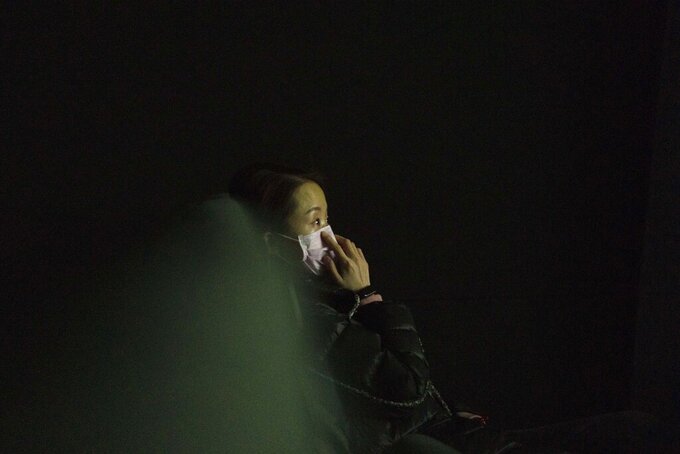 A lone movie goer attends the first screening of the film "Days and Nights in Wuhan" in a cineplex in Wuhan in central China's Hubei province on Friday, Jan. 22, 2021. China is rolling out the state-backed film praising Wuhan ahead of the anniversary of the 76-day lockdown in the central Chinese city where the coronavirus was first detected. (AP Photo/Ng Han Guan)

WUHAN, China (AP) — Two new films about Wuhan were released Friday, the eve of the anniversary of the start of a 76-day lockdown in the central Chinese city where the coronavirus was first detected. How they were released and who their audiences are stand in stark contrast.

The first, a state-backed film praising Wuhan's sacrifices, is being screened throughout China, targeting audiences that firmly back the ruling Communist Party’s response to the outbreak. The second, a somber documentary about the pandemic from artist and political activist Ai Weiwei, has been forced to seek viewers online, a testimony to the party’s influence over the global film industry.

The Chinese government has sought to control the narrative and deflect blame about the pandemic's origins. It has weaved a story of triumph against the virus through TV shows, social media campaigns and books, lauding nurses and doctors and government-backed vaccine companies. Any criticism of early missteps is silenced.

The state-backed film “Days and Nights in Wuhan” features contributions from 30 filmmakers portraying the suffering of the city's 11 million residents, medical staff and front-line workers as they battled the virus that began racing through the city in December 2019.

Ai’s “Coronation” has been rejected by festivals, theaters and streaming services including Amazon and Netflix, he said. He attributes the censorship to fears over offending the ruling party, which controls what movies can be shown in China and what Chinese films can be displayed abroad.

“I don’t care about the film festivals,” Ai said in a virtual news conference Friday hosted by the Foreign Correspondents' Club of Japan. “But they are a platform, they should present meaningful films. That's their duty. If there's a failure of this duty, then I feel ashamed of them.”

The lockdown in Wuhan, imposed on Jan. 23, 2020, was eventually extended to surrounding areas in Hubei province, confining some 56 million people to their homes.

“Days and Nights in Wuhan,” directed by Cao Jinling, debuted in Wuhan earlier and was released nationwide Friday. The film echoes China’s official line that the measures it took, including the lockdown, bought precious time for the world to prepare for the pandemic. Critics say habitual Communist Party secrecy and weak control measures allowed the virus’ initial spread.

It's not clear if there are plans to show it overseas.

“We wanted to record the journey of battling against the COVID-19 epidemic via motion picture. Some of the details, including the intense care, anxious waiting, heartbreaking farewells and hopeful rebirths, might strike a chord with viewers,” Cao was quoted as saying by state broadcaster CCTV.

In the trailer, medical staff repeatedly express their determination to prevail over the outbreak. “I have a burning love for my hometown and I will do whatever I can to save it," says one ambulance driver.

Ai’s film tackles the same story from the perspective of construction workers, delivery staff, medical workers and Wuhan residents. Like the other film, it is a collage, but draws instead on footage filmed sometimes surreptitiously by friends, colleagues and amateur videographers, some of whom remain anonymous to avoid repercussions from the authorities.

His film offers a rare glimpse of the pain that COVID-19 patients in China suffered, with footage of them struggling to breathe as medical workers in protective gear attempted to save them.

Hospitals and morgues were overwhelmed at the height of the crisis and Wuhan accounts for the bulk of China's death toll of 4,635.

Following a thinly attended showing of “Days and Nights in Wuhan” on Friday morning, Wang Yu said the movie had awakened both memories of the trauma of lockdown and fears for what might still lie ahead.

“It’s hard to describe. It’s been a year since then, and to think back now, it’s still painful," said Wang, 31. Relatives of her husband who died in the outbreak appeared in the film, she said.

“There is the mutated virus, there’s fear. It’s the second Lunar New Year holiday that we have to pass like this,” she said. “Things are little better than last year but I’m worried, its not completely over. You’re still under the effect of the virus, the fear and the terror."

Wuhan has been largely free from the virus since the end of lockdown, while smaller outbreaks have set off renewed containment measures in many other Chinese cities.

China’s government has sought to cast doubt that Wuhan is the source of the pandemic, pushing fringe theories that the virus was actually brought from outside the country, possibly by U.S. soldiers.

The city is now hosting a team sent by the World Health Organization to begin investigating the virus’ origins.

A panel of experts commissioned by the WHO criticized China and other countries this week for not moving faster to stem the initial outbreak, prompting Beijing to concede it could have done better but also to defend its response.