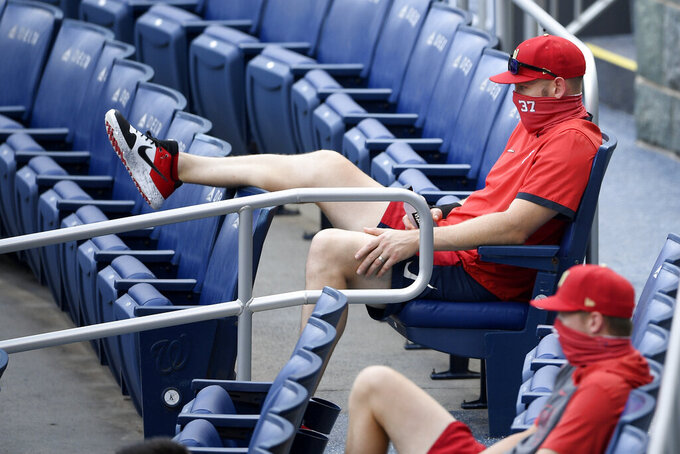 Washington Nationals' Stephen Strasburg (37) watches from the stands during the first inning of a baseball game against the Toronto Blue Jays, Tuesday, July 28, 2020, in Washington. (AP Photo/Nick Wass)

WASHINGTON (AP) — The World Series champion Washington Nationals are 1-4 after losing three games in a row. Normally? Not a big deal. Matters more in a 60-game, pandemic-shortened season.

Missing slugger Juan Soto, they've scored a grand total of four runs during the skid, including a 5-1 loss to the Blue Jays on Tuesday night that included two outfielders colliding on a homer by Toronto’s Vladimir Guerrero Jr., two errors by second baseman Starlin Castro that led to three unearned runs, and just one hit for Washington after the third inning.

“In a longer season, you get time to feel these things out,” said Nationals shortstop Trea Turner, who was caught stealing in the sixth, one of the gaffes manager Dave Martinez noted afterward. “Now it's definitely magnified.”

There's no doubt Soto's absence is a big deal; he's been out since opening day because of a positive COVID-19 test.

“We definitely miss him,” Turner said, “and we need him back.”

Martinez agreed, of course. But he also wanted to set aside the scoring issues, because, as he put it: “The hitting's going to come and go.”

More worrisome to a skipper who turned around this club after it opened 2019 with a 19-31 mark were the other problems.

Former Nationals pitcher Tanner Roark (1-0) got a win in his Blue Jays debut, allowing one run and three hits in five innings.

“The main thing: These guys know a lot about me," Roark said about the Nationals, "so just keeping them off balance and keeping them guessing what I'm trying to throw.”

After hitting four solo shots in Monday’s series-opening victory, the Blue Jays tacked on two more off Austin Voth (0-1) — by Guerrero in the second, then Lourdes Gurriel Jr. in the fourth. Voth went five innings, giving up two earned runs and four hits.

“I was a little bit off,” Voth said. “The off-speed pitches today weren't as sharp as they needed to be.”

Guerrero, son of the Hall of Famer, drove a pitch toward the top of the fence, where outfielders Emilio Bonifácio — subbing for Soto in left — and Victor Robles both gave chase and jumped, knocking into each other. And so while Robles initially appeared to corral the ball with the webbing of his glove, the contact dislodged that red-and-blue piece of equipment from his left hand.

The glove and — more importantly — the ball ended up in the visitors' bullpen, giving Toronto a 1-0 lead.

The Nationals tied it in the third when Adam Eaton followed Turner’s double with a single. The next baserunner Washington produced was via Turner's walk in the sixth — and he quickly was caught stealing. The only other hit was Turner's double in the ninth.

“Our pitching has been outstanding. Our bullpen has been good,” manager Charlie Montoyo said after his Blue Jays improved to 3-2. “I’m really happy about the first five games.”

The same two clubs begin a two-game series at the same ballpark Wednesday — except the Blue Jays will be the “home” team, the Nationals the “visitor.” The Canadian government did not want teams traveling in and out of Toronto, so the Blue Jays needed to find somewhere else to play. After a bit of a stop-and-start search, they settled on a minor league stadium in Buffalo — which is still being prepped to host big league games.

In another scheduling anomaly brought about by the pandemic, the Nationals will have an unheard-of three days off in a row at the end of this week. Their three-game series at Miami was taken off the calendar when Major League Baseball suspended the Marlins’ season through Sunday after a slew of positive COVID-19 tests. Martinez said there was a near-unanimous vote Monday night by the Nationals against traveling to Miami.

Martinez said the team got back a second negative test result for Soto, who was put on the COVID-19 IL last week.