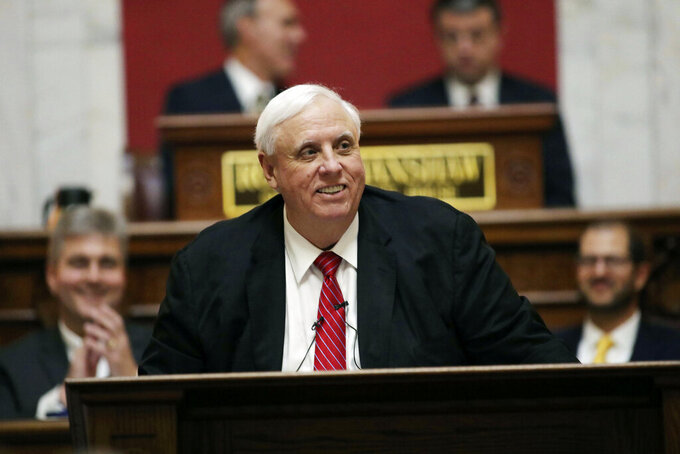 FILE - In this Jan. 8, 2020, file photo, West Virginia Gov. Jim Justice delivers his annual State of the State address in the House Chambers at the state capitol in Charleston, W.Va. Justice says two people have died from a coronavirus outbreak at a nursing home. The deaths at the Princeton Health Care Center happened as Justice expressed concerns Wednesday, July 29, about a bump in virus cases along the state’s southern and western borders. (AP Photo/Chris Jackson, File)

CHARLESTON, W.Va. (AP) — Two people have died from a coronavirus outbreak at a West Virginia nursing home, according to Gov. Jim Justice, who also expressed concern Wednesday over a bump in virus cases along the state’s southern and western borders.

“We have got to realize that this thing is a killer,” the Republican governor said at a news conference. "Absolutely, we have got to do all that we possibly can, each and every one of us. We can’t drop our guard. We’ve got to stay on top of this."

Twenty people at the nursing home recently tested positive for the virus, bringing the total since March to 19 residents and 23 staff, he said.

In the past week alone, there have been 50 more confirmed cases in Logan County and 49 in Mercer County, where the nursing home is located. Up until a week ago, those counties had a combined 129 confirmed cases.

“It'll be a miracle from God above if more of them don't die,” Justice said.

While 276 people at the nursing home were tested for the virus last week, the two deaths have prompted health officials to test them again, Justice said.

Confirmed cases in West Virginia have more than doubled in the past month. There have been at least 6,269 confirmed cases and 111 deaths, state health officials reported on their website Wednesday.