2020 Watch: How and when will Trump reopen the economy? 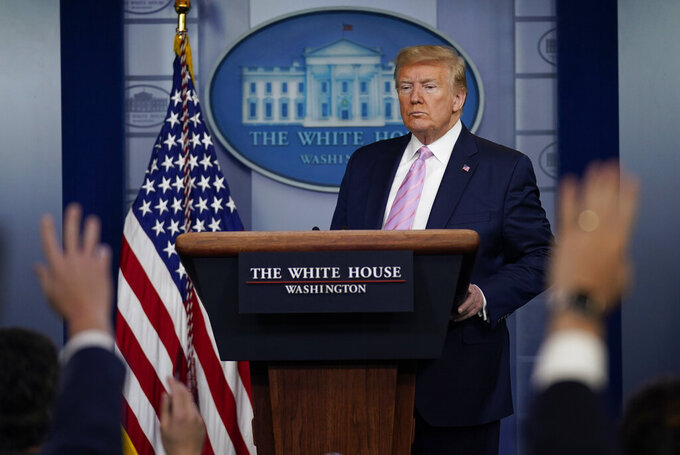 FILE - In this Friday, April 10, 2020, file photo, President Donald Trump answers questions during a coronavirus task force briefing at the White House in Washington. More people have died of COVID-19 in the United States than any other country in the world. And the nation is not yet at the pandemic's peak. Presidential politics are a long way from getting back to normal, but the steps that Trump takes in the coming weeks will define his reelection and much more. (AP Photo/Evan Vucci, File)

More people have died of COVID-19 in the United States than in any other country. And the nation is not yet at the pandemic's peak.

Presidential politics are a long way from getting back to normal, but the steps that President Donald Trump takes in the coming weeks will define his reelection and much more.

Democrats are quickly pivoting to the general election. Bernie Sanders abruptly ended his presidential bid last week, leaving Joe Biden as the last Democratic candidate standing in the yearlong nomination fight. Biden and his allies are beginning to lay the groundwork for the next phase of the election, but this is Trump's show for the foreseeable future as he tries to navigate the worst crisis in generations.

How and when will Trump reopen the economy?

Trump has been hinting he will soon reopen the economy, using his own undisclosed metrics to decide when the time is right.

How and when he begins the process of encouraging people to get back to work may be the most consequential decision of his presidency. Should he do it too soon, health experts warn that another wave of infections would surely follow. The longer he waits, the more the economy suffers.

Trump will have a difficult time blaming someone else if it doesn't go well. He continues to serve as the face of the federal government's coronavirus response during near-daily briefings. Look for new details to emerge this week about his plans.

Can Biden unify his party?

Biden has effectively won the Democratic presidential nomination, but the real work of the 2020 election has barely begun.

The 77-year-old career politician has glaring political weaknesses and money problems, yet his most important challenge will almost certainly be unifying a deeply divided Democratic Party.

It's far from certain that Sanders' die-hard loyalists will support Biden this fall. The prospect of Trump's reelection will convince some to hold their noses and vote for the former vice president, but do not underestimate the lingering strength of anti-establishment sentiment in both parties.

Having spent more than four decades in Washington, Biden is the essence of the establishment. It'll take much more than a few policy shifts to win over his party's most passionate voters. He needs help.

What will Wisconsin teach us?

Election experts tell us that Wisconsin offered a great example of how not to run an election in the midst of a pandemic.

After Republicans refused to delay the state's presidential primary election or expand absentee voting, many voters last week were literally forced to risk their lives to cast ballots in person.

Thousands waited hours in line at overcrowded polling stations, while others reported they never received absentee ballots. State officials are scheduled to report the election results on Monday.

We'll all be looking at turnout numbers to gauge the impact of the Election Day chaos, while some are already fearing a surge in Wisconsin coronavirus cases linked to Election Day. The outcome will offer important context to states that are planning how to balance public health with voting rights come November.

Biden is about to unveil his vice presidential vetting committee amid steady speculation — much of it fueled by Biden himself — about the process and his preferences.

The former vice president has promised to pick a woman, and the campaign has had curiously warm relations with California Sen. Kamala Harris and Michigan Gov. Gretchen Whitmer in recent days, while Minnesota Sen. Amy Klobuchar continues to be a strong Biden ally.

No doubt more names will come out, and some already have, such as Nevada Sen. Catherine Cortez Masto, but the political world will largely focus on Harris, Klobuchar and Whitmer until given a good reason not to.

That means all three will face enormous public and private scrutiny in the days and weeks ahead. Whitmer is especially vulnerable given her limited national profile.

Can Trump do more to help African Americans?

African American voters are suffering disproportionately from this pandemic, according to a mounting pile of evidence from several states.

They are more likely than whites to die if infected, and they are often suffering from greater economic hardship. That's an unfortunate reality that strikes at the heart Trump's well-documented effort to peel away African American support from Democrats this fall.

He's fond of asking black voters for their support this way: What do you have to lose? Well, the coronavirus outbreak is beginning to offer a clear and devastating answer. The Trump administration must do more to address the deadly disparity if it hopes to limit Biden's advantage with African Americans in November.

The chaos in Wisconsin last week demonstrated why every state needs a proactive plan to protect public health and voting rights in the age of the coronavirus.

We all hope that extreme social distancing measures will be over by November, but health experts suggest a second or third wave of infections is a real possibility.

As an example for democracies across the world, the United States should not force voters to risk their lives to participate in an election. But that scenario is easy to envision, even in a premiere swing state like Wisconsin, if state officials don't take steps to address the predictable policy challenge soon.