At 39, Feliciano Lopez is not just showing up, he's winning 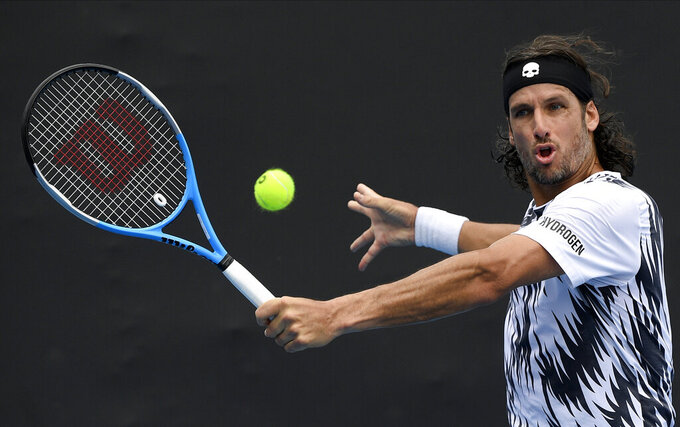 MELBOURNE, Australia (AP) — Feliciano Lopez doesn't remember much about his first Grand Slam match. It was 2001, the French Open, and he was 19 years old.

“I think I got killed in the first round by Carlos Moya, if I'm not wrong. He was my idol growing up," Lopez said. "For me, it was like a gift, to play Carlos at the French Open.”

“He probably didn’t expect it, after two sets to love (up), you don’t expect the 39-year-old guy is going to come back," Lopez, admittedly exhausted, said after the match.

Perhaps even more astonishing, Lopez is playing at his 75th consecutive Grand Slam event, a record among men's singles players. He hasn't missed a major since the 2002 French Open.

To put this in perspective, Roger Federer managed 65 consecutive Grand Slams before he had to withdraw from the 2016 French Open with an injury. The closest male player with an active streak is Italy's Andreas Seppi at 62; among the women, it's Alize Cornet at 56.

Lopez has carved out a decent career for himself, with seven career titles (more than half coming on his beloved grass) and four quarterfinal appearances at the Slams (including three at Wimbledon).

But it's his longevity and consistency that sets him apart from the rest. Getting into the main draws of majors on a regular basis depends on maintaining a top-100 ranking, and Lopez has done this, too, for most of his career. (He's currently ranked No. 65.)

Lopez even managed to keep his streak alive here in Melbourne despite the hard decisions about traveling not long after his wife gave birth to their first child, Dario, a little over a month ago.

“I didn’t know if I was going to be able to come here,” he said after his first-round win. “I was until the last minute thinking about what should I do, if I come or if I finally stay home.”

The trip was arguably worth it — particularly after his improbable, come-from-behind win against Sonego. It may just be the most memorable five-set match of his career, he said.

“To win a match in a Slam for me now is very special. If I do it the way I did today, even more,” he said. “So, to be in the third round now, it’s something very special for me. That’s why I’m very happy today.”

Former No. 1 and 2018 Australian Open champion Caroline Wozniacki is getting ready to add “Mom” to her list of titles.

The 30-year-old from Denmark announced on Twitter that she is pregnant, writing: “Can’t wait to meet our baby girl in June!”

She retired from professional tennis after a third-round loss last year at Melbourne Park.

Mixed doubles matches don’t get much traction early on at Grand Slam tournaments. Last year, Jamie Murray and Bethanie Mattek-Sands changed all that — and they’re back this year as a team at the Australian Open.

Murray and Mattek-Sands, the eventual runners-up, beat the top-seeded team of Barbora Strycova and Marcelo Melo in the first round last year.

Two games into that match is when all the fun started. Mattek-Sands hit a shot down the line to apparently win a point. But the chair umpire gave the point to Melo and Strycova, citing hindrance from Murray because he called for a challenge in the middle of the rally.

The decision stunned Mattek-Sands and Murray, and an argument ensued between the pair and the chair umpire that lasted 10 minutes.

“Tell me, how else are you supposed to call a challenge in the middle of a fast point,” Mattek-Sands said to the umpire. “Do you know how fast the ball comes at me?

The umpire said Mattek-Sands needed to have stopped the rally for the challenge to have occurred, and the point to Strycova and Melo stood.

Strycova is also back this year with a new partner, Nikola Mektic, as the top seeds in the draw. Mattek-Sands and Murray are unseeded.

Mixed doubles were cancelled at the U.S, Open and French Open last year because of restrictions in place for the COVID-19 pandemic.

AP Tennis Writer Howard Fendrich in Washington and Dennis Passa in Brisbane contributed to this report.