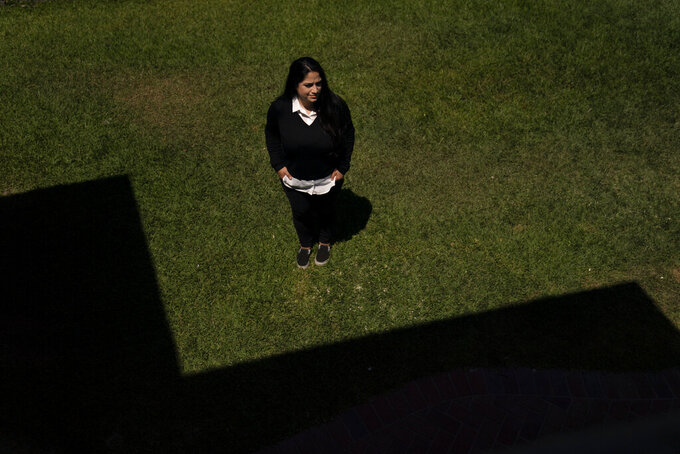 Registered nurse Sarvnaz Michel stands for a photo Friday, June 11, 2021, in Lake Forest, Calif. Death is part of the job for Michel, an intensive care nurse at Providence St. Jude Hospital in the Orange County city of Fullerton. But usually patients have family and friends with them for comfort. The coronavirus stopped that, forcing Michel to care for their emotional as well as physical needs. "Just seeing people dying by themselves, it was hard. It was very, very hard," she said. "Now COVID is better, but I see all the doctors and nurses, they are still suffering from all the stuff that happened." (AP Photo/Jae C. Hong)

California fully reopens on Tuesday, a watershed event that will underscore how far the state has come since the start of the year when the coronavirus was at its deadliest. The pandemic's toll on the nation's most populous state is knee-buckling: nearly 3.8 million confirmed cases and more than 63,000 deaths.

Those statistics tell only part of the story. Virtually everyone among the state's nearly 40 million residents saw their lives altered or forever changed. Here are four of those stories:

The coronavirus patient was an older woman. She could see her family through the glass doors of her hospital room, but she couldn’t touch them. She told her nurse — Sarvnaz Michel — that her biggest fear was to die alone.

Michel made sure the woman was comforted at the end, holding her hand until she took her last breath, as Michel did for others during the pandemic, including her grandmother.

Death is part of the job for the intensive care nurse at Providence St. Jude Hospital in the Orange County city of Fullerton. But usually patients have family and friends in the room to uplift them. The coronavirus stopped that, forcing Michel to care for her patients' emotional needs, as well as the physical ones.

“Just seeing people dying by themselves, it was hard. It was very, very hard,” she said. “Now COVID is better, but I see all the doctors and nurses, they are still suffering from all the stuff that happened.”

Throughout the pandemic, Michel would call her mom on her way home from work and try to forget about her day. But everything about the pandemic was a reminder. She would change clothes in her garage before walking straight to the shower to avoid possibly passing the virus to her husband and two small children.

Her boys — Leonidas, 3, and Arshan, 1 — give her energy. Leonidas didn’t understand why the family couldn’t go places or hug relatives for the past year. Michel explained it the best she could, telling him the virus was like “little monsters” living outside, and the best way to be safe was to stay away from them.

Things have gotten better. A few weeks ago, she took her youngest son to Target, his first time in a retail store. At first she marveled at his reaction, but then she remembered: “He’d never been anywhere.”

She was one of the first people in California to get a COVID-19 vaccine and her family members are all vaccinated.

Her grandmother was scheduled to get the vaccine in March but before she could she suffered a fall and had to go to rehab, where she contracted the virus. She died on her 90th birthday.

Michel was alone with her in the hospital, FaceTiming with her family.

“I held her hand, took the mask off her face, (took) her dentures off, and said the last goodbye to her,” she said.

Michel is not sure how she feels about California reopening on Tuesday. “We can’t close everything forever,” she says.

Even though her mother and sister are vaccinated, she worries about them because they work in places that require interacting with the public. She plans to keep wearing a mask and says it will be awhile before she ever goes to Disneyland.

“I’m just a little scared,” she said. “The thing that I learned in the pandemic is I cannot control everything. It was a life lesson for me. I do whatever I can, I put my 110% to keep myself and my family safe, and I just pray to God they will be safe.”

A CHEF HAS A GREATER APPRECIATTION FOR FAMILY AND FRIENDS

Anthony Magee feels like he is emerging from a long, bad dream, but one that has driven home the importance of family and friends.

The 28-year-old chef has respiratory issues and when the pandemic hit his employer told him to stay home. He returned to work weeks later but it didn't last long — he was laid off, spent 10 weeks with no income and had to move in with his brother.

Even though he wasn't working, Magee said he had to be tested for the coronavirus three times a week to live with his brother, who is a referee for the NBA and needed to stay healthy to be ready for the resumption of play last summer.

A few months later, a family friend hired Magee at her San Diego wine bar, The Alcove, that had opened only months before California went into lockdown to control the spread of the virus.

The two worked together to keep the business afloat as the pandemic stretched out over 15 months. They added required health safety measures and built up their outdoor seating only to be forced to close when the state again imposed restrictions as the number of cases went on a rollercoaster ride of ups and downs.

“It’s been challenging, keeping staff, and the liability,” he said.

In December as California’s outbreak was headed toward peak levels, Magee’s mother fell ill with the virus and had to be hospitalized. She recovered but they missed Christmas together.

As cases dropped and things have slowly reopened this spring, Magee said he cherishes his time with his loved ones, and looks forward to bringing more people back to the neighborhood wine bar to cook them a good meal.

“It’s been a hard time but we made it through, thank goodness,” he said.

But after living with restrictions for this long, he added, it now feels surreal to being returning to normalcy.

“Being on lockdown this long, reopening feels like a dream,” he said. “It doesn’t feel like it’s real just because our norm is with the mask and having so many people to a table. I’m always double checking my pockets for my mask and running back to the car.”

He just hopes that people stay safe well beyond Tuesday. And that they stay home sick.

HOUSEKEEPER YEARNS TO RETURN TO WORK

For furloughed hotel housekeeper Maria Mata, the last 15 months have been filled with worries over how to feed her family, pay the rent and keep her elderly mother, adult son and young granddaughter safe.

She was furloughed from her nine-year job at the W San Francisco hotel at the start of the pandemic. She lost her health insurance in November and has struggled to get benefits through California’s beleaguered unemployment agency.

While the hotel has reopened, management has been slow to re-hire housekeepers, preferring to pay overtime to fewer housekeepers than bring back more full-time workers, she says.

“I want to go back to work,” she said in Spanish. “I don’t have money, I don’t have insurance. At the same time, I don’t want to infect my mother and without health insurance I’m very afraid to leave the house.”

Other business sectors are reopening but the tourism industry in California is not expected to top pre-pandemic levels until 2024. Only 15% of hotel employees in San Francisco are back at work and at the W, the percentage of housekeeping staff hired back lags occupancy, says Anand Singh, president of UNITE HERE Local 2.

Marriott International, owner of the W Hotels chain, did not respond to emailed requests for comments.

There have been some upsides to life in lockdown, Mata says.

Without a three-hour roundtrip commute from her home in Concord to San Francisco, she has been able to watch movies with her mother, 89, and play outdoors with her energetic granddaughter, who is 8.

Her sister-in-law has helped with the $1,900 monthly rent and her son, who arrived from El Salvador last year, was able to find construction work during the pandemic. The family receives groceries from their church and getting vaccinated was a breeze with the state prioritizing Latino residents and essential workers.

But she’s also developed diabetes and the stress is endless. Mata doesn’t expect life to return to normal until tourism and conventions return to San Francisco.

“I hope that everyone gets vaccinated so I can feel safe. I hope to go back to work and I hope my son finds a different kind of job. I hope my granddaughter goes back to school,” she said. “I hope that things could be like they were before.”

A MOTHER AND SON SEPARATED BY THE VIRUS

For more than a year, Cathy Colombatti has been unable to visit the nursing home room where her now-44-year-old son is living. She hasn’t been able to hug him or get close enough to him to feel confident he can hear what she is saying.

Steve Santoro, the eldest of Colombatti’s three children, had been at the nursing facility in San Gabriel for just five days when the virus forced it to close its doors to visitors. Colombatti, her husband and her other two children were shut out.

“Who knows what more eyes we could have had on Steve, how better he would have been today?” she said.

Nursing homes and other care facilities were very hard hit by the virus. In Los Angeles County, where Santoro is being cared for, nearly 3,500 skilled nursing care patients died during the pandemic, along with more than 100 staffers.

Patients who recovered from the virus or avoided it, suffered from the lack of visits from family, friends and therapists.

Santoro has special needs and a history of epilepsy that was under control until he was hospitalized in 2019, with doctors later determining he had a stroke. He spent six weeks in the hospital and was moved to one center initially and later the facility in San Gabriel, his mother said.

Colombatti, 70, said she and their tight-knit family could visit him daily there and hire staff to stay with him until midnight to be sure he had company and his needs were being met. That is, until the lockdown.

Since then, they’ve only been allowed outdoor visits in a patio at a distance and while wearing masks. When the weather grew too cold for him to go outside, they had to see him through a window. Her daughter, a nurse, tried rapping keys on the glass to try to communicate and see if he would respond.

Even though Santoro and his family have been vaccinated, she said they’re still not allowed to get near him or enter his room. Last week, Colombatti said she was allowed during the family’s weekly 30-minute visit to get near enough to hold her son’s hand for the first time — while wearing gloves and a hospital gown.

“This is to me inhuman, unconscionable,” she said. “I said, ‘How do other families handle this?’ They said, ‘They’re handling it very hard.’”