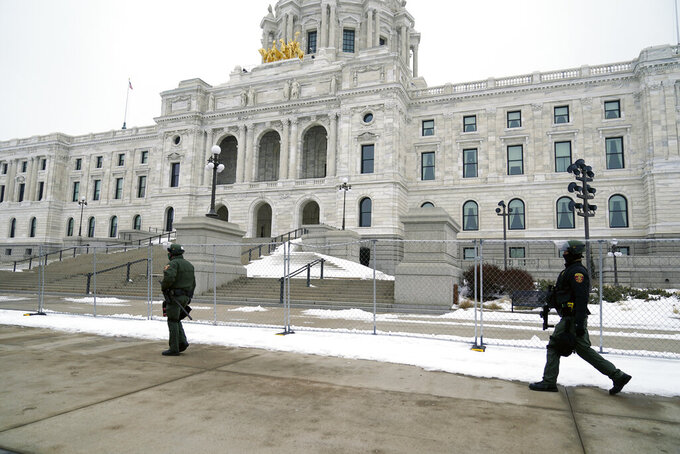 MINNEAPOLIS (AP) — The four Republicans in Minnesota's congressional delegation split on whether to certify President-elect Joe Biden's victory in the Electoral College, but remained silent Thursday on whether President Donald Trump and other GOP leaders bear any blame for the violent attack at the U.S. Capitol that interrupted the proceedings.

Minnesota Democrats, however, held little back on a day when top Democratic leaders called for Trump's removal. House Speaker Nancy Pelosi joined them in calling on Vice President Mike Pence and the Cabinet to invoke the Constitution's 25th Amendment to force Trump from office, saying Congress may otherwise proceed to impeach him.

Republican Reps. Michelle Fischbach and Jim Hagedorn both supported the challenges, while Tom Emmer and Pete Stauber did not. Emmer and Hagedorn didn't announce their positions until after the rioting.

While all four decried the violence, none suggested that Trump or others who sought to undermine confidence in the election results bore any responsibility for the insurrection.

Democrats in the delegation sharply condemned the attack. During the scramble to flee the chamber Wednesday, Rep. Dean Phillips had yelled at Republicans, “This is because of you!”

On Thursday, Phillips implored Congress to stay in session to consider impeaching Trump and to back using Section 4 of the 25th Amendment to remove him. He also demanded dismissal of those responsible for the security failure at the Capitol.

In an interview with The Associated Press, Phillips excoriated Trump.

“The lies and disinformation, the stoking of anger and yesterday’s de facto encouragement of storming the Capitol is egregious, criminal, seditious and intolerable," Phillips said. “And anybody who after yesterday’s events doesn’t see it the same way — I simply have to disagree with and encourage them to do some soul searching.”

Phillips said principle has to be placed above political self-preservation.

Other Minnesota Democrats also called for invoking the 25th Amendment. And U.S. Rep. Ilhan Omar moved ahead with articles of impeachment.

“Every single hour that Donald Trump remains in office, our country, our democracy and our national security remain in danger,” Omar wrote to colleagues. “Congress must take immediate action to keep the people of this country safe and set a precedent that such behavior cannot be tolerated.”

Fischbach's spokesman said she was not available for an interview. None of the three other Minnesota Republican representatives responded to interview requests. None of their pubic statements or tweets Wednesday and Thursday sought to hold anyone accountable.

State Rep. Ryan Winkler, of Golden Valley, majority leader of Minnesota’s Democratic-controlled House, said Republican members of Congress “made common cause” with the mob that stormed the Capitol on Wednesday.

Protesters in Minnesota held a less eventful rally dubbed “Storm the Capitol” in St. Paul that later migrated to the Governor’s Residence as the mob overran the U.S. Capitol. The rhetoric included the use of the word “casualties” and threats to show up at the homes of judges and elected officials. No arrests were made, and Department of Public Safety spokesman Bruce Gordon said no repercussions were expected.

State troopers guarded the Capitol during the rally, and extra security remained at the site Thursday. Public Safety Commissioner John Harrington told WCCO Radio that he was “never happier” to have riot fencing around the Capitol, which was erected in June amid the unrest following the death of George Floyd when Minneapolis police forcibly detained him.

Democratic Senate Minority Leader Susan Kent, of Woodbury, said discussions about security at the state Capitol are ongoing as lawmakers and state officials attempt to "strike a balance" between allowing the building to be open to the public while both protecting the site from unrest and preventing the spread of COVID-19.

“It is the people's house, we cherish that aspect of it. The pandemic has changed that in a way that is hard for all of us but, in many ways, necessary to keep people safe,” she said. “These are ongoing conversations to make sure that people who would do violence to people and to the processes of our government don't have the access to do that.”

Ibrahim is a corps member for the Associated Press/Report for America Statehouse News Initiative. Report for America is a nonprofit national service program that places journalists in local newsrooms to report on undercovered issues.