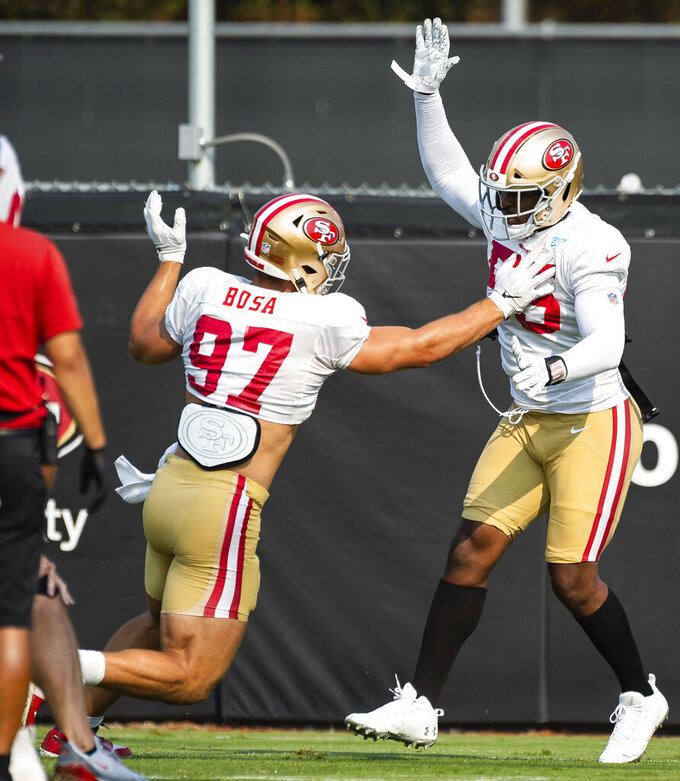 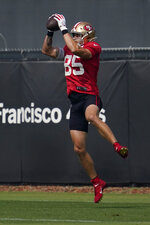 SANTA CLARA, Calif. (AP) — More than six months after the defense wilted against Patrick Mahomes, Jimmy Garoppolo missed Emmanuel Sanders deep, and San Francisco collapsed in the fourth quarter of the Super Bowl, the 49ers got together to watch the game as a team for the first time.

The process of re-watching a game the Niners led 20-10 in the fourth quarter before losing 31-20 to Kansas City was cringe worthy at times, But was a necessary step if San Francisco can buck tradition and go from runners-up to champs in one season.

“Football is a game that gives you a lot of scars, but it’s a matter of how do you come back and use those scars to learn, to grow, and then ultimately never let them happen again,” tackle Mike McGlinchey said. “That’s the message that this team has felt since the night of Feb. 2. I’m excited because that feeling is still there. I think it’s a good thing that it bothers people when that still comes on, because it’s just that much more of a driving factor to get back there, and then ultimately finish the job.”

The fourth quarter of the Super Bowl provided a disappointing ending to what had been a glorious season for the Niners. They went from four wins to 13 in coach Kyle Shanahan’s third season and showed they have the foundation to remain a contender.

Only three teams have won a title the year after losing the Super Bowl, with the 2018 Patriots the only ones to do it in the past 47 seasons.

The 49ers might be the team best suited to deal with a virtual offseason and lack of preseason that resulted from the COVID-19 pandemic. They have the highest share of returning players, weighted by playing time, and have almost the entire coaching staff back as well. They gave new long-term contracts to defensive lineman Arik Armstead and All-Pro tight end George Kittle to keep key players in place. That made it much easier to get back up to speed this summer and build on what they did last year rather than start from scratch. Even one of the key newcomers, left tackle Trent Williams, has familiarity, having played under Shanahan for four seasons in Washington.

Garoppolo’s first full season as a starter was mostly a success with 27 TD passes, four fourth-quarter comebacks, and big-play moments to get San Francisco to the Super Bowl. But he didn’t have to carry a heavy load last year, as evidenced by his eight passes in the NFC title game. He also was too mistake prone with 13 interceptions. He faltered in the fourth quarter of the Super Bowl, with his overthrow of Sanders on a potential go-ahead TD pass late in the fourth quarter the most glaring mistake. But the Niners hope he can raise his game another level now that he is fully healed from the knee injury that cost him most of the 2018 season.

Shanahan and GM John Lynch have been adamant about wanting to build the defense from the trenches. San Francisco has drafted five defensive linemen in the first round in the past six drafts, as well as trading a second-round pick for Dee Ford in 2019. That paid off last season when the additions of Defensive Rookie of the Year Nick Bosa and Ford helped transform the defense.

“The front office expects not just good out of us, they expect great,” Bosa said. “If we’re not great, then we’re not going to be as good as we need to be. When you invest a lot in the D-line room, you expect to get the return on it. We use that as motivation every day.”

While the Niners have most of their key pieces back, they are counting on two rookies to fill some big shoes. No. 13 overall pick Javon Kinlaw was drafted to take over for stalwart DeForest Buckner. San Francisco then traded up to take receiver Brandon Aiyuk 25th overall to replace Sanders. The pressure on Aiyuk only grew when starter Deebo Samuel missed training camp with a broken foot, but he responded well and will be expected to contribute immediately if he recovers from a strained hamstring.

The Niners are hoping to get a boost offensively by the return from injuries of running back Jerick McKinnon and slot receiver Trent Taylor. McKinnon has missed the past two seasons with knee injuries but looks healthy in camp; he adds another dimension with his speed and receiving ability out of the backfield. Taylor was one of Garoppolo’s most trusted receivers in 2017 and should take some attention away from Kittle.