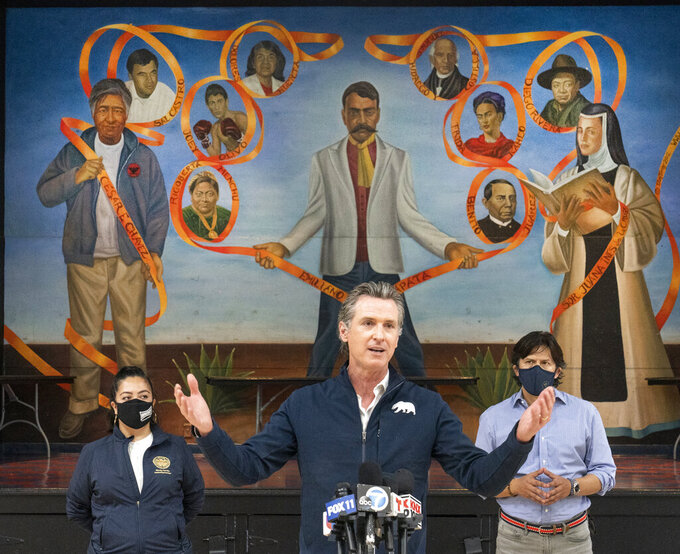 SACRAMENTO, Calif. (AP) — After months with little change, five of California's 58 counties advanced to having fewer business restrictions on Tuesday and San Francisco is poised to soon follow as the state's worst coronavirus surge continued to ease.

Eight counties are likely to move next week and “even more still” in two weeks, Gov. Gavin Newsom said.

“I’m talking about bright light at the end of this tunnel," Newsom said.

The change under the state’s four-stage, color-coded plan for reopening the economy allows restaurants to reopen for limited indoor dining starting Wednesday, while fitness centers, movie theaters and museums are among those that can reopen indoors with safeguards including mandatory face coverings and capacity limits.

The others changing tiers Tuesday are largely rural Humboldt and Shasta counties in the state's far north, and agricultural Yolo County northwest of Sacramento.

The changes are occurring as the Democratic governor is under intense political pressure to restart the economy. Opponents are nearing the end of a signature-gathering drive to trigger a recall election.

Along with Napa, Santa Clara and San Francisco, five other counties listed in a state database seem on the verge of meeting the state's requirements to move to a less restrictive tier next week. They are El Dorado County east of Sacramento, Lassen and Modoc counties in the state's northeast corner and San Luis Obispo on the Central Coast, all currently in the most-restrictive tier.

Sierra County, already in the orange, moderate tier, could be the first to move next week to the lowest yellow tier that would allow most indoor business operations to open with safety modifications.

Newsom said his goal is to "get these businesses fully operational” as conditions continue to improve. He spoke at a Sacramento delicatessen as he signed a stimulus package worth $7.6 billion into law, with aid for businesses and at least $600 in one-time payments for 5.7 million lower-income people.

Hospitalizations and ICU cases are down about 40% from a month ago, and death rates are about a third of what they were then, when the state had a record number of fatalities from the massive surge that bridged the winter holidays and lingered into the new year.

While overall numbers are steadily improving, researchers said a seemingly more dangerous variant of the virus spread rapidly through California and is on track to soon account for most cases in the state.

University of California, San Francisco researchers found the strain spreads more quickly and can better withstand immunity from vaccines and earlier infections. It may also lead to higher instances of intensive care and death, though that is based on a relatively small sample size, and it may not be as bad as other variants, for instance one from South Africa.

“I wish I had better news to give you — that this variant is not significant at all,” said Dr. Charles Chiu, who led the research, told The New York Times. “But unfortunately, we just follow the science.”

Since September, the variant has spread to account for more than half of all cases analyzed by the state. It may account for the extraordinary spread of the coronavirus particularly in Southern California. It has been found in most other states but not to the same degree.

Statewide, another 225 deaths were reported Tuesday, and the state is on the verge of 50,000 since the pandemic began a year ago.

“I am glad that we are finally able to re-enter the red tier,” Yolo County Board of Supervisors chairman Jim Provenza said after three months of the most severe restrictions. “This will benefit gyms, restaurants, youth sports and many others."

He warned residents to keep following safe practices, however, "so that we can avoid another surge in cases and a possible return to the purple tier.”

Before Tuesday, 52 of California’s 58 counties encompassing nearly all of the state’s 40 million people had been stuck in the most restrictive purple tier under the state’s four-stage, color-coded plan for reopening the economy.

Other counties already deemed to have lower risks of transmission, with consequently fewer restrictions on non-essential indoor business operations, were all rural and largely mountainous counties: Del Norte, Mariposa and Plumas counties in the next red tier; Alpine and Sierra counties in the orange tier.