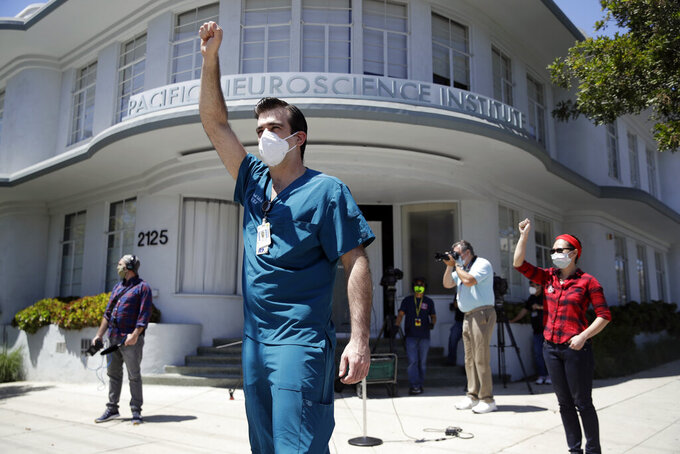 FILE - In this Tuesday, April 21, 2020 file photo, nurses Michael Gulick, center, and Angela Gatdula, right, hold their arms up in protest outside of Providence Saint John's Health Center in Santa Monica, Calif. The hospital suspended ten nurses, including Gulick, from their jobs the previous week after they refused to care for COVID-19 patients without being provided protective N95 face masks. Gatdula says she contracted COVID-19 and has recovered. (AP Photo/Marcio Jose Sanchez)

From the very moment the coronavirus pandemic reached America’s shores, the country was unprepared. Health care facilities didn’t have the masks and equipment needed to protect their workers. The Associated Press and “FRONTLINE” launched a seven-month investigation to understand what was behind these critical shortages.

Medical supply chains are the fragile lifelines between raw materials and manufacturers overseas, and health care workers on COVID-19 front lines in the U.S. Their catastrophic collapse was one of the country’s most consequential failures to control the virus.

EDITOR’S NOTE — This story is part of an ongoing investigation by The Associated Press, the PBS series “FRONTLINE,” and the Global Reporting Centre that examines the deadly consequences of the fragmented worldwide medical supply chain and includes the film “ America’s Medical Supply Crisis, ” premiering on PBS and online Oct. 6 at 10 p.m. EST/9 p.m. CST.

Key takeaways from the AP and “FRONTLINE”/PBS investigation:

—The Trump administration knew in January that the COVID-19 virus spread person-to-person, and that demand for masks, gowns and gloves would help protect health care workers. Yet officials did not immediately stop exports or ramp up production in ways that could have eased impending critical medical supply shortages. But that didn't happen. Instead, U.S. companies continued to export critical materials to Asia, Europe and even Canada, whose governments signed contracts with American manufacturers.

—For more than a decade the U.S. government had clear, in-person and written warnings that there would not be enough medical supplies if a global pandemic hit, and there would be deadly consequences. One reason was that the country remained dependent on factories in other countries, which immediately shifted supplies to their own citizens when COVID-19 hit. Rather than make the effort and financial commitment to diversify the supply chain and bring some production home, U.S. officials largely ignored the warnings and even allowed emergency stockpiles to become depleted.

—Months into the pandemic, there remains a major disconnect between the White House, which insists there is now plenty of personal protective equipment, or PPE, for anyone who needs it, and the doctors, nurses and first-line responders who say they still don't have enough masks, gloves, gowns and other medical supplies. That's partly because the U.S. Centers for Disease Control and Prevention, in response to early shortages, revised its guidance to allow health care workers to reuse protective equipment against the advice of manufacturers.

—Counterfeit medical supplies that are less protective have poured into the U.S. The AP and “FRONTLINE” sent a box full of imported medical masks to the University of North Carolina to be tested. They all were counterfeit, and some were about as effective for protecting wearers as a piece of fabric. Two different federal agencies — the Department of Homeland Security and the Justice Department — have two different initiatives to halt widespread fraud, but fake COVID-19 tests, fake N95s, even fake cures are readily available online today.

— As of today, it's unclear if there are enough needles and syringes stockpiled to inject everyone in the U.S. if a COVID-19 vaccine became immediately available. The Trump administration says needles and syringes are on order, but details of the contracts are shrouded in secrecy. Several contractors said the government has forbidden them from disclosing any information, even if they want to.