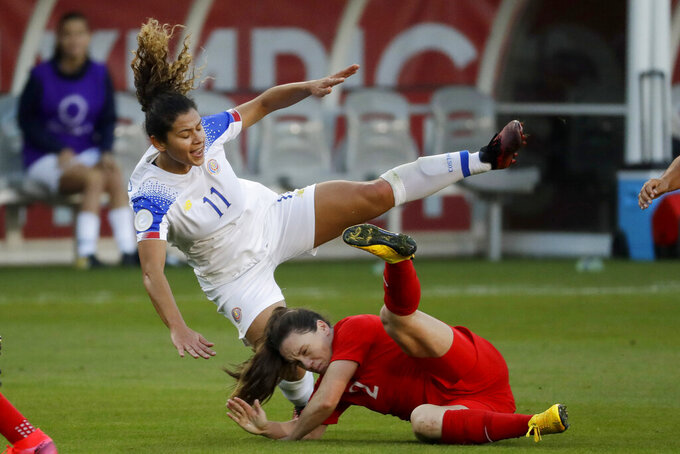 FILE - In this Feb. 7, 2020, file photo, Costa Rica forward Raquel Rodriguez, top, is knocked over by Canada defender Allysha Chapman during the first half of a CONCACAF women's Olympic qualifying soccer match in Carson, Calif. Raquel Rodriguez, better known as Rocky to her fans, was in route to join her new National Women’s Soccer League team when sports were shut down by the coronavirus. It certainly wasn’t an ideal start for the Costa Rican striker with the Portland Thorns. (AP Photo/Chris Carlson, Fle) 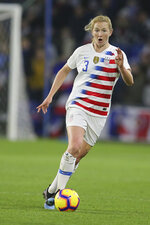 WHO IS MISSING: Midfielder Megan Rapinoe opted out of the tournament. Defender Julia Ashley is injured.

WHAT TO EXPECT: There were big changes for the Reign in the offseason. They were purchased by OL Groupe, the parent company of French powerhouse Olympique Lyonnais, in December. In January, the team named Farid Benstiti coach to replace Vlatko Andonovski, who became the head coach of the U.S. national team. Benstiti has a wealth of talent to work with despite Megan Rapinoe's decision to sit out the Challenge Cup. Players to watch include Welsh national Jessica Fishlock and last season's NWSL Rookie of the Year, Bethany Balcer. Costa Rican Shirley Cruz comes to the United States after extensive experience abroad.

WHO IS MISSING: Midfielder Tobin Heath, opted out of the tournament, Midge Purce, traded in the offseason.

WHAT TO EXPECT: During the offseason, Canadian Christine Sinclair set the all-time international goals record, among men or women. With the Thorns since 2013, the softspoken veteran led Portland with nine goals last season. The team's second-highest scorer, Midge Purce, was traded to Sky Blue. But Portland added veteran Becky Sauerbrunn, acquired in an offseason trade with the Utah Royals. The Thorns also got the first two picks in the NWSL draft, taking Stanford's Sophia Smith and Washington State's Morgan Weaver.

WHAT TO EXPECT: The defending league champions are considered the favorites to win the Challenge Cup. There's plenty of U.S. national team firepower in Crystal Dunn, Jessica McDonald, Samantha Mewis and Abby Dahlkemper, but there's also talented Brazilian star Debinha, who had eight goals and seven assists last season and earned title game MVP honors, and Lynn Williams, who was second only to Chicago's Sam Kerr in scoring last season with 12 goals. Not to be overlooked is Abby Erceg of New Zealand and newcomer Hailie Mace, a standout at UCLA who played in Australia and Sweden last season. The Courage return 10 of their starting 11 from last year's team.

WHO IS MISSING: Christen Press, opted out of the tournament, and Becky Sauerbrunn, traded to Portland in the offseason.

WHAT TO EXPECT: As hosts of the Challenge Cup, the Royals have an advantage in that players will be allowed to stay in their own homes for the duration of the tournament. Although Utah will no doubt miss Christen Press and her scoring prowess, forward Amy Rodriguez led the team with nine goals last season. The team has a new head coach, Craig Harrington, who took over in February only to see the league shut down before play started. He has a daunting task in replacing popular coach Laura Harvey, who left to take over the under-20 U.S. team.

WHO IS MISSING: Australian Sam Kerr, left in the offseason for Chelsea.

WHAT TO EXPECT: The departure of Australian Sam Kerr for Chelsea stings, she was the league MVP last season with 18 goals — adding to her career league record. But Chicago still has Yuki Nagasato, a savvy playmaker who had eight goals and eight assists last season. The Red Stars' defense is stellar with Ertz, the reigning U.S. Soccer Player of the Year who moved to the backline late last season, and Short, a young talent worth keeping an eye on. National team goalkeeper Alyssa Naeher shores up the D in the net. Keep an eye on Kealia Watt, who joined Chicago in the offseason.

WHO IS MISSING: Lots of turnover from last season, but Sofia Huerta, Kyah Simon and Kealia Watt are among those no longer with the club.

WHAT TO EXPECT: The Dash were busy shuffling, or maybe a better description is overhauling, in the offseason. They brought in Shea Groom and Megan Oyster from the Reign, Katie Stengel from Utah and defender Erin Simon from West Ham United. The Dash are the NWSL's lone team without an allocated U.S. national team player on the roster. But they do have Kristie Mewis, the sister of North Carolina's Samantha Mewissea . Kristie Mewis got a call-up to the national team in December. The Dash are still a work in progress under coach James Clarkson, who is embarking on his second season.

WHO IS MISSING: Jen Hoy retired, Raquel Rodriguez went to the Thorns. Carli Lloyd and Mallory Pugh are sitting out the tournament because of injuries.

WHAT TO EXPECT: Sky Blue is a team on the rise after a turbulent past few seasons. A big reason is Alyse LaHue, who took control of the club as GM last spring and made improvements across the board. Freya Coombe is in her first season as head coach. Sky Blue will no doubt miss the steady leadership of veteran Carli Lloyd, as well as the talent of offseason acquisition Mallory Pugh. Both have injuries and won't play in the Challenge Cup. But that means Midge Purce could shine on her new team after scoring eight goals with Portland last season.

WHO IS MISSING: Mallory Pugh left in the offseason for Sky Blue.

WHAT TO EXPECT: Anytime Rose Lavelle takes the field it's worth watching. A dynamo, she scored in the World Cup final for the United States and won the tournament's Bronze Ball. She'll be joined in the Spirit's stout midfield by Andi Sullivan and Jordan DiBiasi. Other young players to watch include Ashley Hatch, the 2017 NWSL Rookie of the Year, and UCLA's Ashley Sanchez, who could see significant playing time taking over for Pugh. Hatch, who had seven goals last season, should be joined up top by Japanese international forward Kumi Yokoyama.

WHAT HAPPENED: The Orlando Pride were forced to withdraw from the tournament after six players and four staff members tested positive for COVID-19 leading up to the Challenge Cup. The players were being retested in case of false positives, but the medical protocol for the tournament is such that they won't be able to participate even if the initial test results were incorrect.