800 nurses at a Massachusetts hospital preparing to strike 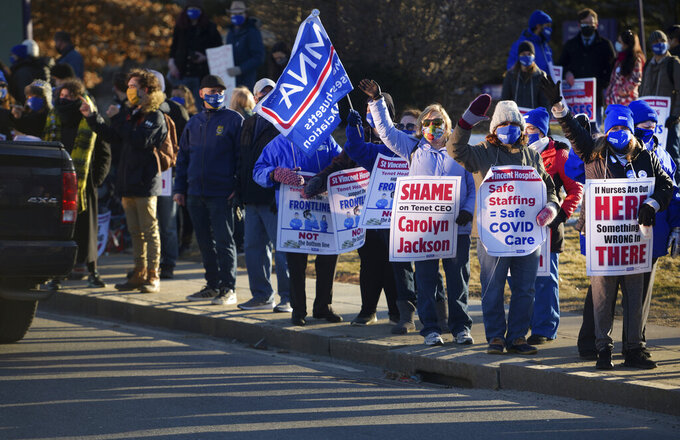 Nurses and supporters line the street outside of Saint Vincent Hospital Sunday, March 7, 2021, in Worcester, Mass., ahead of a rally on the eve of a possible strike. (Christine Peterson/Worcester Telegram & Gazette via AP)

WORCESTER, Mass. (AP) — Nurses at St. Vincent Hospital in Worcester are planning to strike on Monday following what they described as failed negotiations with Dallas-based Tenet Healthcare, which owns the hospital.

The nurses said in a press release that Tenet has refused to address their call for needed staffing improvements to ensure safer patient care. They scheduled a rally in Worcester on Sunday night ahead of the planned strike.

“It is clear from Tenet’s hardline stance on staffing that they are intent on forcing nurses to strike,” Marlena Pellegrino, a registered nurse and co-chair of the bargaining unit, said in a press release.

“We are resolved to do whatever it takes for as long as it takes to protect our patients, as it is safer to strike now than allow Tenet to continue endangering our patients,” she said. “We are always ready to get back to the table to negotiate whenever Tenet is ready do the same.”

The hospital issued a statement Sunday saying they are disappointed in what they called an irresponsible decision to call a strike in the middle of an ongoing pandemic, but said they are “fully prepared and appropriately staffed to continue to provide safe, high-quality care to our patients.”

Hospital management also said that over “18 months of negotiations, we listened attentively to our nurses and made multiple increasing offers to the MNA” — the Massachusetts Nurses Association, which is representing the striking nurses.

They said that “because of the costs associated with the strike, the hospital may revise its offer to account for the economic impact of the MNA’s action.”

The MNA said the decision to strike followed what they described as a concerted effort over the last two years by the nurses to convince Tenet to improve the patient care conditions at the facility — poor conditions they say that have only been exacerbated by the pandemic.

The last time St. Vincent nurses went on strike was in 2000, when a 49-day work stoppage helped them get their first union contract.