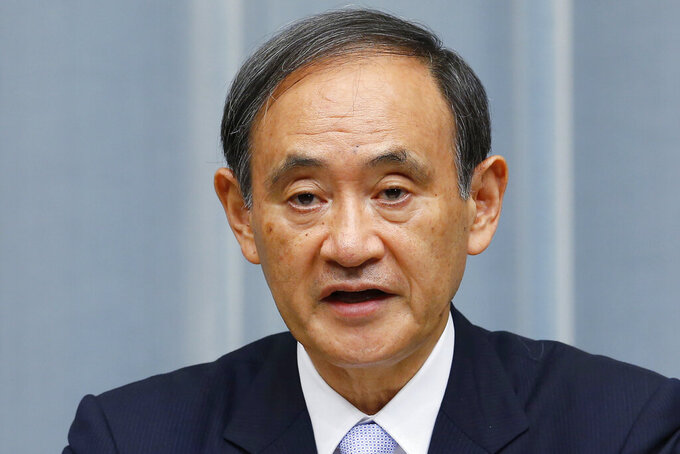 FILE - In this Aug. 3, 2017, file photo, Japan's Chief Cabinet Secretary Yoshihide Suga speaks during a press conference to announce the new line up of Cabinet at the prime minister's official residence in Tokyo. Suga, a longtime loyal assistant and the public face of outgoing Prime Minister Shinzo Abe in daily media briefings, has emerged as a favorite to succeed him in an upcoming internal party vote. Suga is set to announce his candidacy and key policies later Wednesday, Sept. 2, 2020. (AP Photo/Shizuo Kambayashi, File)

TOKYO (AP) — Japan's Chief Cabinet Secretary Yoshihide Suga, a longtime loyal assistant and the public face of outgoing Prime Minister Shinzo Abe in daily media briefings, has emerged as a favorite to succeed him in an upcoming internal party vote.

Suga formally announced his candidacy Wednesday, pledging “to succeed policies that Prime Minister Abe has devoted his body and soul and to push them forward.” Suga said that he, as a politician who worked with Abe, decided to run to take over the prime minister's unfinished work.

Abe, who has had ulcerative colitis since he was a teenager, last week announced he would resign after setting a record of 2,799 consecutive days in office.

A member of the ruling Liberal Democratic Party who doesn't belong to any faction, Suga has been approached by leaders of other party wings as someone who can ensure the continuation of Abe’s policies, including strengthening Japan's security alliance with the U.S., dealing with the coronavirus pandemic and shoring up the economy.

Suga confirmed that balancing coronavirus prevention measures with an economic recovery would be his top priority. He also promised to further the Japan-U.S. alliance, developed through a friendship between Abe and President Donald Trump, within the limitations of Japan’s pacifist constitution while also staying the course on Abe’s economic and diplomatic policies.

Party executives decided to hold an internal vote on Sept. 14 to choose a new leader, who will then become the prime minister after winning parliamentary approval two days later with the ruling coalition's majority.

By Wednesday, five of seven faction leaders in the party, including Deputy Prime Minister Taro Aso, another Abe confidante, had expressed support for Suga, increasing his chances of winning, according to media reports.

The son of a strawberry grower in the northern prefecture of Akita, Suga is a self-made politician, a rarity in Japan’s largely hereditary business of politics. He earned his own tuition while working several part-time jobs to graduate from a university in Tokyo. He entered politics as secretary to a lawmaker for 11 years and served as a city assemblyman for nearly nine years before he was elected to parliament in 1994.

As Japan's longest-serving chief Cabinet secretary, Suga is a policy coordinator and adviser to Abe — the point man behind the centralized power of the Prime Minister's Office that influences bureaucrats to implement policies. Suga is also known to have helped smooth out differences by keeping close ties with both LDP heavyweight Toshihiro Nikai and a centrist coalition partner, Komeito.

He has earned a reputation for his matter-of-fact twice-daily televised media briefings. He’s become known as “Uncle Reiwa” after he was tasked with unveiling the new imperial era name for Emperor Naruhito last year.

Despite his soft-spoken and low-key image, Suga, who is also in charge of Okinawa, has offended local leaders with his heavy-handed approach to push the central government's policy in a dispute over the relocation of a U.S. Marine air station to another spot on the southern island. Suga also invited protests last year over his hostile responses to a newspaper reporter asking tough questions criticizing Abe policies.

Suga has been a loyal supporter of Abe since his first stint as prime minister in 2006-2007, which ended abruptly because of Abe's health problems, and helped him return to power in 2012 after six years of annual leadership changes.

Except his support for Abe's policies, Suga's own political vision is unclear and his leadership may not last very long, possibly restarting an era of short-lived leadership, said Koichi Nakano, an international politics professor at Sophia University in Tokyo.

The next prime minister will finish the rest of Abe’s term, until September 2021. There are no female contenders.

Abe's successor will also have to grapple with the Tokyo Olympics that has been postponed to next summer, setting Japan’s security policy in the face of an increasingly assertive China, and the outcome of the presidential election in the U.S., Japan’s key ally.

They said that Abe’s policies tended to ignore the voices of ordinary people and that they intent to address the economic and social divisions that had widened under Abe. Neither man has proposed any major changes in Japan’s security and diplomatic policies.