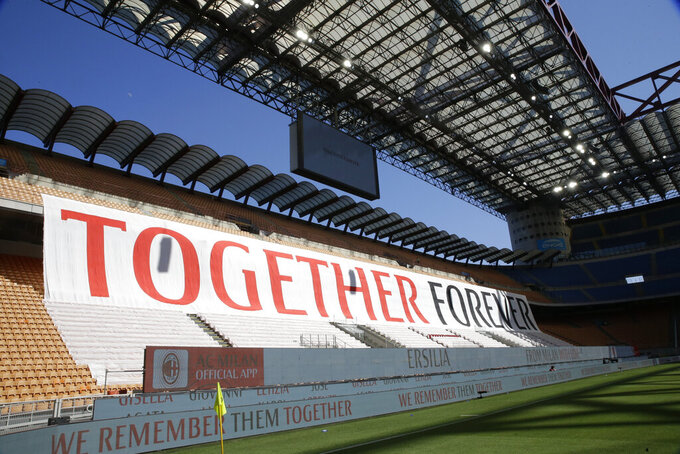 A giant banner is displayed during the Serie A soccer match between AC Milan and Roma, at the San Siro Stadium in Milan, Sunday, June 28, 2020. It was Milan's first home match since the lockdown and the team put up a huge banner along one side of the empty San Siro stadium that read “Together Forever,” dedicated to coronavirus victims. The Lombardy region of which Milan is the capital was the hardest hit area in Italy with more than 16,000 deaths. (AP Photo/Luca Bruno) 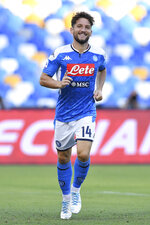 ROME (AP) — AC Milan paid solemn tribute to victims of the coronavirus pandemic during a 2-0 win over Roma on Sunday in Serie A.

It was Milan’s first home match since the lockdown and the team put up a huge banner along one side of the empty San Siro stadium that read “Together Forever,” dedicated to victims.

The Lombardy region of which Milan is the capital was the hardest hit area in Italy with more than 16,000 deaths.

Under the banner, 13 Milan shirts with victims’ names on them were placed over the seats.

In game action, both sides appeared to struggle with the 32C (90F) heat until Ante Rebić finally found the target for Milan in the 76th. Hakan Çalhanoğlu scored from a penalty in the 89th.

“It was very hot, so it was unthinkable to play at an intense rhythm for 90 minutes," Milan coach Stefano Pioli said.

The game was labeled an “American derby” between clubs with U.S. ownership.

It was Milan’s second straight win of the restart after getting eliminated by Juventus in the Italian Cup semifinals — and its first victory this season over a team in the top six.

“We won deservedly, because we stayed together as a squad when in trouble,” Pioli said. “We were looking for a victory against a strong opponent and we got it deservedly.”

The Rossoneri are in seventh place while Roma remained fifth and dropped nine points behind Atalanta, which beat Udinese 3-2 and holds the final Champions League spot.

Filling in for the injured Zlatan Ibrahimović , Rebić scored from close range following a series of rebounds, including one of his own efforts off the post.

The penalty was awarded when Chris Smalling tripped Theo Hernández.

Third-place Inter Milan scored twice in the last seven minutes to secure a 2-1 win at Parma.

After an early opener from Gervinho, Inter hit back with headers from Stefan de Vrij and Alessandro Bastoni.

Parma was reduced to 10 men after De Vrij’s goal when Juraj Kucka was sent off for protests.

Luis Muriel scored twice after coming off the bench in Atalanta’s 3-2 win at Udinese.

That boosted his total to nine as a substitute this season, setting the record for Serie A in the era of three points for a victory.

Atalanta also broke its club record of goals in a single season, reaching 80, with 10 games still to play. Its previous record was 77 last season when it finished a club-best third place.

The Bergamo team is pushing for third again this season, remaining four points behind Inter.

Kevin Lasagna had a brace for Udinese.

Napoli maintained its strong form after the lockdown with a 3-1 win over relegation-threatened Spal.

Dries Mertens, José Callejón and Amin Younes scored for Napoli, which has won two straight in the league since beating Juventus for the Italian Cup title.

Also, Bologna beat Sampdoria 2-1 and Rogério equalized seven minutes into stoppage time for Sassuolo in a 3-3 draw with Hellas Verona.