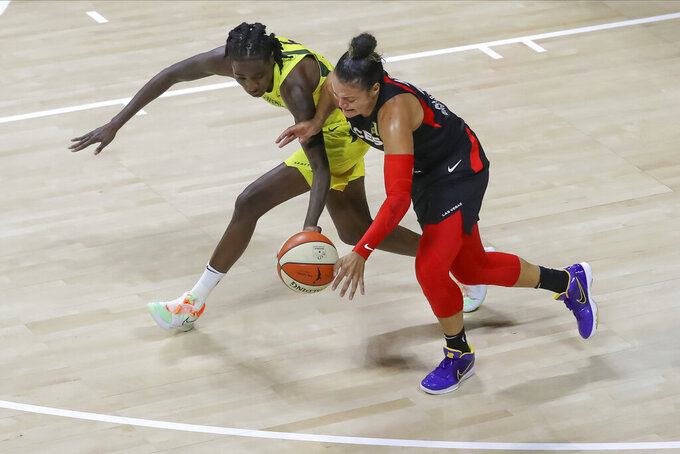 Las Vegas Aces' Kayla McBride, right, has the ball knocked away by Seattle Storm's Natasha Howard during the second half of a WNBA basketball game Saturday, Aug. 22, 2020, in Bradenton, Fla. (AP Photo/Mike Carlson)

Las Vegas is on a roll, winning nine of its 10 games in August.

Buoyed by a strong defense, the Aces moved to the top of the Associated Press WNBA power poll Tuesday, passing Seattle. The Storm had held the top spot in the poll all season long until two consecutive losses last week dropped them a spot to No. 2.

Las Vegas came into the season short-handed with Kelsey Plum injuring her Achilles' tendon and Liz Cambage getting medically excused because she was at higher risk for major illness if she contracted the coronavirus. Bill Laimbeer's team still had A'ja Wilson, who has been playing like an MVP candidate and a healthy Angel McCoughtry, who missed last season with a knee injury when she played for Atlanta.

The pair have helped Las Vegas be efficient on offense and control the boards. The Aces are leading the league in rebounds at 37.1 a game and only giving up 31.4 a contest — third best in the WNBA.

The Aces also have played a brand of smash-mouth basketball. They don't take a lot of 3s — Las Vegas takes only 10 a game. the lowest by far in the league. But what the Aces do is attack the basket and get to the free throw line, where they shoot just over 23 a game.

1. Las Vegas (10-3): Danielle Robinson has provided a spark off the bench for the Aces. The veteran guard averaged 11 points and eight assists in the past two games.

2. Seattle (11-3): Sue Bird has missed the last few games with a flare up of the bone bruise in her left knee that she injured early this season. The Storm hope to have her back soon.

3. Los Angeles (10-3): Seven straight victories has vaulted the Sparks up the standings. Stellar play from Candace Parker has been a huge reason for the surge.

4. Chicago (10-4): The Sky have been bitten by the injury bug lately with Azura Stevens (left knee soreness) and Diamond Deshields (bone bruise, thigh) missing the past few games. Courtney Vandersloot has stepped up in their absence, averaging 19 points, 11.3 assists and 3.3 rebounds over the team's last three games — all wins.

5. Minnesota (9-4): With Sylvia Fowles out indefinitely with a calf injury, the Lynx need to a team effort to make up for her rebounding and defensive presence.

6. Phoenix (7-7): Brittney Griner left the WNBA bubble for personal reasons and its unknown if or when she'll return. Without their 6-foot-8 center the Mercury have played more small ball with guards Diana Taurasi, Skylar Diggins-Smith and Bria Hartley playing together.

7. Connecticut (6-8): The Sun finished a brutal part of their schedule with 10 games in 19 days going 6-4. Now with a little more rest they will try and make a push for the playoffs.

8. Indiana (5-8): Julie Allemand has played herself into rookie of the year conversations with an impressive first season. She's averaging 8.2 points and 5.5 assists — second best in the league. If she continues to play well the team could make its first postseason appearance in a few years.

9. Dallas (5-9): The Wings lost Moriah Jefferson (knee) and Isabelle Harrison (ankle) for the season and are going to need to have some of their young players step up in their absence. The good news is that Satou Sabally returned from missing a few games with a back ailment.

10. Washington (4-9): Myisha Hines-Allen has been a major bright spot for the Mystics this season averaging 16.2 points and 8.4 rebounds. She had a huge 35-point 12-rebound game go to waste in a loss to Dallas.

11. Atlanta (3-11): The Dream finally ended a 10-game skid with a victory over Minnesota Even better news is that Chennedy Carter has been warming up with the team before games and may return soon from her ankle injury,

12. New York (1-12): The Liberty did get some good news this week that No. 1 pick Sabrina Ionescu won't need surgery on her ankle after suffering a Grade 3 sprain.

PLAYER OF THE WEEK

Candace Parker earned player of the week honors after helping Los Angeles win all three of its games this week. She averaged 18.3 points, 11.7 rebounds and 5 assists for the Sparks. Other players receiving votes included A'ja Wilson of Las Vegas and Courtney Vandersloot of Chicago.

Diana Taurasi honored Kobe Bryant the best way she could on the Hall of Famer’s 42nd birthday Sunday night.

The Phoenix Mercury star scored a season-high 34 points while wearing a No. 8 jersey with “Bryant” on the back in the team’s victory over the Washington Mystics.

Aces vs Storm, Thursday. A rematch of the top two teams in the league with the Aces looking to secure the tiebreaker between them with a victory.