Actor James Hong back in spotlight with Hollywood star push 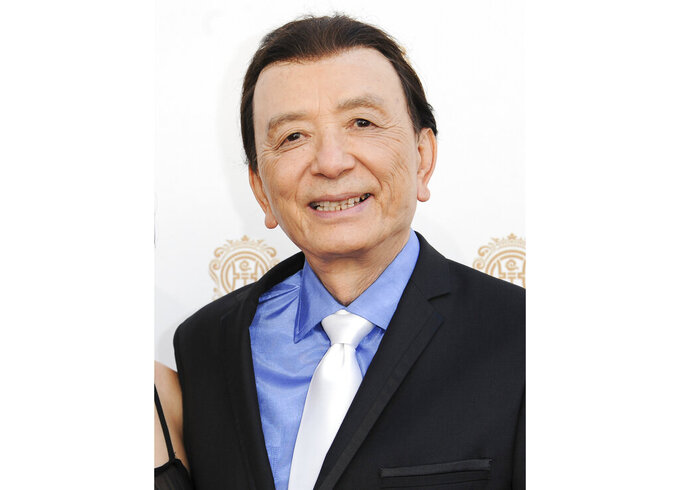 FILE - Actor James Hong arrives at the Huading Film Awards in Los Angeles on June 1, 2014. The 91-year-old actor, with more than 600 acting and voice-over credits to his name, will receive a star on the Hollywood Walk of Fame, thanks to actor Daniel Dae Kim, who launched a campaign to raise the money needed to create and install a star. (Photo by Richard Shotwell/Invision/AP, File) 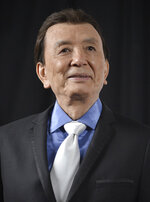 James Hong is learning to do his first Zoom video chat at the spry age of 91. The actor, who has witnessed his industry continuously evolve with technology, is finding it “mind-boggling.”

“What is this Zoom thing anyway?” Hong said from his Los Angeles home, where he's been hunkering down with his wife. “If I live another five years, what are we going to be doing? Talking through our fingernails?”

That sarcastic sense of humor is one of many reasons Hong has remained such an appealing presence on screen for nearly 70 years. With more than 600 acting and voice-over credits to his name, he's sure to pop up any time of day in any country that airs American films and TV. His movie resume includes “Flower Drum Song," “Blade Runner” and “Wayne's World 2.” He's appeared on a slew of hit TV shows since the 1950s — from “Friends” to “The Big Bang Theory” and both versions of “Hawaii Five-0.” He's also got films yet to come out including “Everything Everywhere All at Once,” where he plays father to Michelle Yeoh.

The longtime character actor is now in the spotlight after actor Daniel Dae Kim launched a campaign Aug. 5 to get Hong a star on the Hollywood Walk of Fame. The nomination process isn't until spring but Kim wanted to secure the required $50,000 price tag to create and install a star. While most celebrities have a studio or record label helping to cover costs, Hong does not.

Gearing up for a potentially difficult grassroots fundraiser, Kim and fellow actors Randall Park, Ming-Na Wen and Ken Jeong promised a joint Zoom call for anyone who donated $5,000 or more.

“I thought maybe I should help him raise the money somehow," Hong said. “But he said ‘We’ve fulfilled it.' Even my nephew and niece didn’t get a chance to put in any money.”

Hong didn’t know about the campaign beforehand and was more shocked by the donations than anyone. It was especially meaningful during an economy decimated by the COVID-19 pandemic.

Kim and Hong met when they guest-starred in the same episode of “Charmed” in 2001. In his GoFundMe pitch, Kim said Hong “epitomizes the term ‘working actor,’ and that’s not even taking into account all he’s done to help further representation for actors of color.”

Arthur Dong, author of “Hollywood Chinese" and a longtime friend, said it's no surprise these younger Asian American actors revere him. Hong stuck to his ambition in an era when roles available to Asian actors were mostly tropes and stereotypes — a fact the actor acknowledges. What counted is that he worked to change things, Dong said.

“He’s not a victim. He works to conquer the problem and push for progress,” Dong said. “The fact that he survived it is incredible. I think that’s where the younger generations of actors find respect for him.”

Specifically, Hong and eight other Asian American actors fed up with being offered “cliche roles” formed their own acting troupe in 1964.

“I was doing all these little Chinese kids being rescued by the white guys... and railroad workers. I was very frustrated," he recalled. "When do I get to be James Hong with a main role?”

That acting group developed into Los Angeles-based East West Players, which is today arguably the most reputable Asian American theater company in the country.

Born in Minneapolis, Hong loved to entertain and would practice doing impressions in front of the mirror. His parents, however, wanted him to be a doctor or engineer. He studied civil engineering for three years at the University of Minnesota. He was then drafted to serve in the Korean War. When he returned in 1953, he decided to move with a friend to Hollywood.

The following year, he got a big break making an appearance on Groucho Marx's quiz show, “You Bet Your Life,” because of his Groucho impression. Soon, small roles in films followed and he was sharing the screen with big names like Clark Gable and John Wayne, both of whom he looked up to at the time.

The Hollywood landscape Hong is working in today is vastly different for Asian Americans. Actors aren't just saying no to cliche characters, but some, like Kim, have formed their own production companies to tell the stories they want to tell, Hong said. There are also a lot of more Asian American arts organizations amplifying the voices of talented actors, writers and filmmakers.

“If I live another 10 years, it will be a whole different picture because all those talents are just starting to come forward," Hong said.

If Hong were to join the Walk of Fame's galaxy of nearly 2,700 stars, he'd be one of very few Asian American actors. Last year, Lucy Liu became only the second Asian American woman, after Anna May Wong, to receive a star. Hong can't help but be a little cynical. A couple of people tried to nominate him before but he was rejected.

Whether or not Kim's campaign succeeds, the deluge of donations and fan support still feels like plenty of validation.

“They have told me that what I’m doing is worthwhile,” Hong said. “I knew that before anyway but now there’s hope, there’s a pat on the back.”

Tang reported from Phoenix and is a member of The Associated Press Race and Ethnicity team. Follow her on Twitter at https://twitter.com/ttangAP