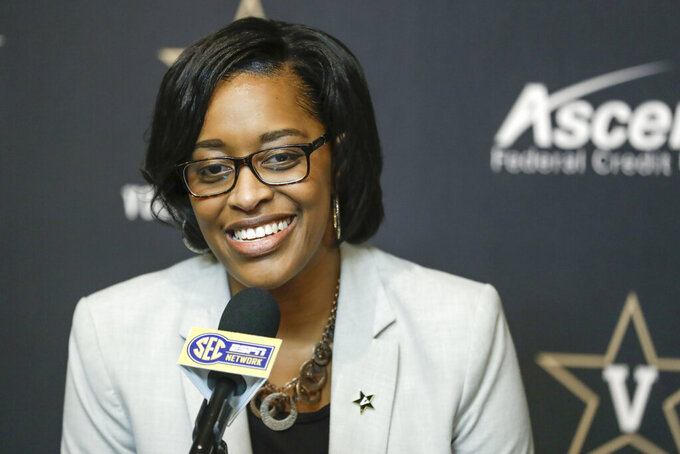 FILE - In this Feb. 5, 2020, file photo, Vanderbilt interim athletic director Candice Lee answers questions during a news conference in Nashville, Tenn. Lee said Monday that Vanderbilt has an opportunity to put its money where its mouth is and prove its commitment to football as they search for a new football coach to replace Derek Mason, who was fired Sunday. (AP Photo/Mark Humphrey, File)

NASHVILLE, Tenn. (AP) — Vanderbilt athletic director Candice Lee sees her first coaching search as a chance for the Commodores to start showing how committed they are to competing in Southeastern Conference football.

“We have an opportunity to put our money where our mouth is," Lee said Monday.

“Now we have a chance, if perhaps that wasn’t the case before, to actually show that we are serious about this commitment and investing in athletics does not take away from the great caliber, the academic caliber of this institution."

Lee fired coach Derek Mason on Sunday after an 0-8 start to his seventh season. Lee said it was a move on what would have been the end of a normal season if not for the SEC pushing back the start due to the coronavirus pandemic and provides time for the search before the early signing period starting Dec. 18.

With Vanderbilt's last major renovation of its football stadium in 1981, Lee said she understands she'll have to show coaching candidates what university officials are planning to upgrade facilities.

“I have to be able to talk about the future and not just talk ... but show them, all right," Lee said. "So there will be things I am going to be transparent with our candidates about where we’re going.”

Lee said she has support with new chancellor Daniel Diermeier a partner in the search as Vanderbilt works to show its commitment to trying to win in athletics, especially football. Diermeier started as chancellor July 1 and attended some football games this fall.

“We’re planning to do things that, quite frankly, we’ve never done before," Lee said.

Lee noted it's important for students to know they have a chance to win. She recalled being able to take part in two Elite Eights, once as the No. 1 seed, while a basketball player herself at Vanderbilt.

“I want these kids to experience that experience at a high level," Lee said. "We’ve got some work to do to make sure that that’s the case. And I want somebody who is up for that challenge and understands that it can be done and be done here.”

This will be the first football coach Lee has helped hire, though she noted she took part in Vanderbilt's last two football hires of James Franklin and Mason. Vanderbilt will be using a search firm, which Lee used in hiring a couple of deputy athletic directors earlier this year.

Mason guided the Commodores to a bowl twice in three seasons, the last clinched with a 38-13 rout of Tennessee in November 2018. Athletic director Malcolm Turner, who was on the job for barely a year, gave Mason a contract extension within his first month on the job in February 2019.

Turner resigned in February. Lee was named the interim athletic director before Vanderbilt took off the interim title in May.

Lee said she told Mason of her decision Sunday, then accompanied the coach as he met with his staff and then members of the football team. Lee also spoke to the families of Vanderbilt's commitments.

She wants an offensive-minded coach, someone with demonstrated ability running a program. But Lee made clear she won't be trying to tick off boxes looking for a coach.

“We want to move as fast as we can,” Lee said. "I’m not going to sacrifice quality for speed.”