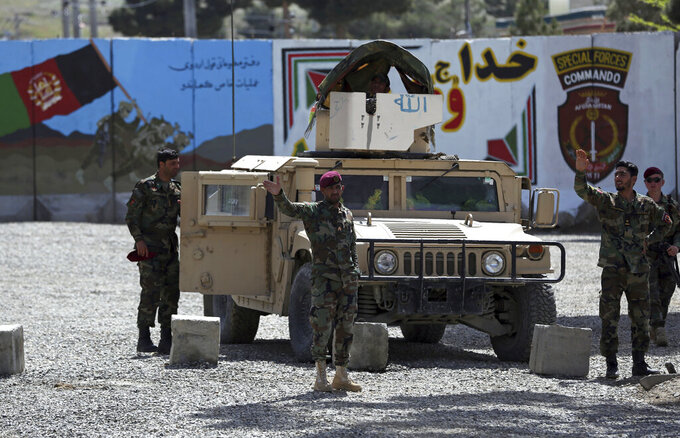 KABUL, Afghanistan (AP) — A suicide bomber on Wednesday targeted a base belonging to Afghan special forces on the southern outskirts of the capital, Kabul, killing at least three civilians and wounding 15, officials said.

The government blamed the Taliban for the attack, which took place a day after the country's defense minister and the commander of U.S. forces in Afghanistan visited the facility.

The bombing happened outside the base for army commandos as civilian contractors working in the facility waited outside to get into the base, said a military official, speaking on condition of anonymity as he was not authorized to talk to the media about the attack.

Tareq Arian, a spokesman for the Interior Ministry, said the site of the bombing was in the Chahar Asyab district and blamed the Taliban for the attack, calling it a crime against humanity.

“The target was likely the base itself, but the bomber failed to reach his target and instead killed innocent civilians," Arian said.

No one immediately claimed responsibility for the attack, but both the Taliban and the Islamic State group are active in Kabul and its surroundings and have repeatedly struck military and civilian targets.

On Tuesday, the Afghan defense minister, Gen. Assadullah Khalid, and the commander of U.S. forces in Afghanistan, U.S. Gen. Scott Miller, visited the base, known as Army Commando Corps, praising achievements of the Afghan commandos and their dedication in defending the country.

Also Wednesday, a sticky bomb attached to vehicle detonated elsewhere in Kabul, wounding three civilians, according to Firdaus Faramarz, spokesman for the Kabul police chief. No one claimed responsibility for that attack.

The Taliban have continued to attack security outposts, even as the U.S. and NATO proceed with a full troop withdrawal that is set to be completed next year under a deal signed at the end of February between the U.S. peace envoy, Zalmay Khalilzad, and the Taliban.

On Sunday, Khalilzad called on the country’s feuding political leaders to set their differences aside to combat the coronavirus pandemic and advance the stalled peace agreement signed with the Taliban.

He said Afghan President Ashraf Ghani and his rival Abdullah Abdullah, who each declared himself the victor in September’s election, should “put the interest of the country ahead of their own” during the Muslim holy month of Ramadan, which began last week.

He urged the government and the Taliban to carry out a prisoner exchange that was part of the U.S.-Taliban agreement. The agreement had called for the release of 5,000 Taliban prisoners and 1,000 government personnel held by the insurgents.

To date, Ghani has released 550 detainees based on age, vulnerability to the virus and time served behind bars. The Taliban have not said if those released are among the prisoners referred to in the agreement. For their part, the Taliban have freed 60 prisoners.

In a statement Wednesday, the Taliban expressed concern that coronavirus could spread unchecked in Afghan government prisons, and urged international right organizations to act swiftly to save lives.

“If the novel coronavirus were to enter these prisons, it could prove catastrophic,” the statement said.

The insurgents also delivered a veiled threat, saying they would exact revenge “upon the cold-hearted enemy" if Taliban prisoners lose their lives to the virus.

Afghanistan has reported 1,939 cases and 58 deaths from the coronavirus.