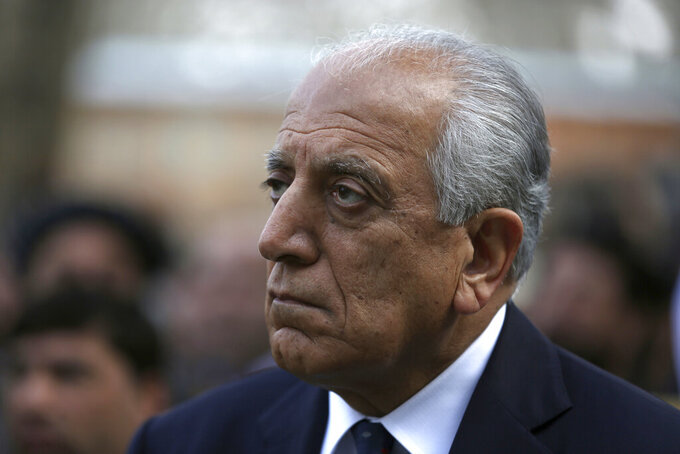 DELRAY BEACH, Fla. (AP) — Zalmay Khalilzad, the U.S. envoy for Afghanistan reconciliation, said Thursday that he has called for the release of an American citizen captured by Taliban-linked militants in discussions with Taliban leadership as continued violence threatens to scuttle a peace deal to end America’s longest-running war.

In a series of tweets from his official account, Khalilzad said he pressed Taliban leaders during an overnight meeting in Doha, Qatar, to secure the release of Mark R. Frerichs, a Navy veteran turned contractor who abducted by militants in late January.

The tweets by Khalilzad mark the first public statement about the capture from a Trump administration official. It comes on the heels of an investigation by The Associated Press last week that noted there had been no public indications that Frerichs has been part of the peace negotiations between the United States and the Taliban. Khalilzad could not be reached for comment. The State Department also did not respond to a request for comment.

American officials believe Frerichs, 57, of Lombard, Illinois, was captured by members of the Haqqani network, a militant group aligned with the Taliban in Afghanistan and designated as a foreign terrorist organization by the Obama administration in 2012.

While little is known about the circumstances of how Frerichs was abducted, U.S. officials believe he was held for a time in Khost, an eastern province along the border with Pakistan and its so-called tribal regions. The mountainous area that historically been a haven for Taliban and al-Qaida militants. The investigation by the AP revealed how Navy SEALs and the U.S. intelligence community tried to gather information that would lead them to Frerichs’ recovery, but the trail went cold.

“The Taliban kidnapped my brother in January. In February, the U.S. signed a peace deal with the Taliban. My brother wasn’t part of the deal,” Charlene Cakora, one of Frerichs’ sisters, said in a statement provided to the AP last week. “Now we are arranging for the Taliban and Afghan government to exchange thousands of prisoners, why can’t we make an American hostage be one of them?”

Khalilzad, the main architect of the peace deal designed to offer the United States an exit from its longest war, said he had a long meeting with Mullah Abdul Ghani Baradar and his Taliban delegation. Baradar is a co-founder of the Taliban and the head of its political office.

“We sought progress on a range of topics: a reduction in violence, humanitarian ceasefire as demanded by the international community to allow for better cooperation on managing COVID-19 pandemic in Afghanistan,” Khalilzad wrote on Twitter.

He added, “Acceleration of prisoner releases by both sides, actions necessary to secure the freedom of U.S. citizen Mark Frerichs, regional & international support for the peace process, and movement to intra-Afghan negotiations.”

This is the second trip Khalilzad has made during the coronavirus outbreak to salvage deadlocked negotiations over provisions in the accord signed between the United States and Taliban leadership on Feb. 29. Khalilzad said he will be meeting again with Taliban negotiators after a trip to India and Pakistan.

President Donald Trump, like his predecessor Barack Obama, has sought to end the long war in Afghanistan, which has left permanently shattered thousands of American families and cost trillions of dollars. More than 2,400 service members have died in Afghanistan since the U.S. first invaded in October 2001.

But despite heavy losses on both the American and Afghan sides, Taliban insurgents have ignored appeals for a ceasefire, even amid the coronavirus outbreak. The Taliban has accused the United States of not upholding its end of the peace deal signed in February.

But as calls by American officials for a reduction in violence on Afghan security forces go largely ignored by the Taliban, a political power struggle has also stalled intra-Afghan negotiations. The rivalry between Afghan President Ashraf Ghani and Abdullah Abdullah — Ghani’s former chief executive, who has declared himself de facto president — continues to complicate matters. Last month, Secretary of State Mike Pompeo voiced frustrations after he failed to mediate the political infighting between the two.

“This is going to be resolved through a political process, and it is time for that political process to begin with all the Afghans coming together around the table,” Pompeo told reporters last month.