As Africa's COVID-19 cases rise, faith is put to the test 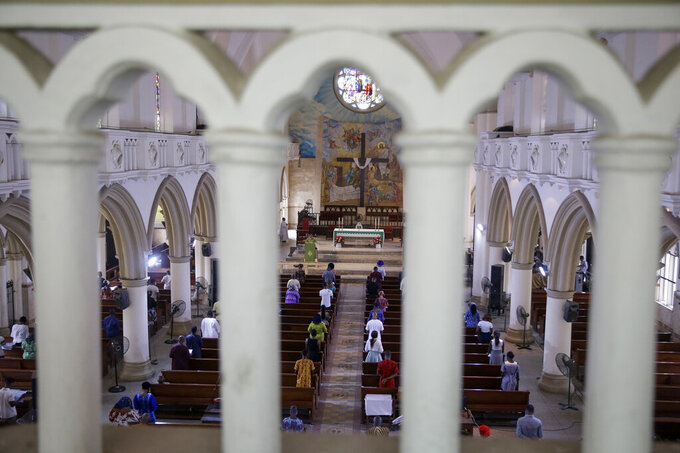 The congregation practises social-distancing to curb the spread of the coronavirus during a Sunday mass at the Holy Cross Cathedral in Lagos, Nigeria Sunday, Aug. 30, 2020. The COVID-19 pandemic is testing the patience of some religious leaders across Africa who worry they will lose followers, and funding, as restrictions on gatherings continue. (AP Photo/Sunday Alamba)

KAMPALA, Uganda (AP) — The COVID-19 pandemic is testing the patience of some religious leaders across Africa who worry they will lose followers, and funding, as restrictions on gatherings continue. Some evangelical Christian leaders in Uganda have launched a campaign with the now-universal phrase of protest: “I can’t breathe.”

Their members vow to occasionally put on the burlap costumes they say resemble the sackcloth worn by biblical prophets.

“Uganda is a God-fearing nation but, unfortunately, due to the lockdown, the citizens of our great country cannot gather to seek God’s intervention,” Betty Ochan, leader of the opposition in Uganda’s national assembly, recently wrote in the local Daily Monitor newspaper. “The devil is taking dominance. If people do not worship God together, they are spiritually derailed.”

From Nigeria to Zimbabwe, people are speaking out — or sneaking out to worship — as they argue that limits on religion could lead to a crisis of faith.

“I am appalled that some people have the audacity to tell us how many hours we can spend in church,” said Chris Oyakhilome, president of the Lagos-based megachurch known as Christ Embassy. “How dare you. What in the world do you think you are?”

Church services in Nigeria resumed last month but are limited to an hour, a severe test for some in a country where worship can spill from a Sunday morning into the afternoon.

Some ministers in Nigeria, Africa’s most populous country, have sparked a separate controversy for saying followers should continue paying their tithes into designated bank accounts. Some ministers have long been accused of maintaining lavish lifestyles at the expense of their followers.

But the larger concerns are rooted in the very nature of belief.

“Coming together is very important from an African point of view,” said Christopher Byaruhanga, a professor of systematic and historical theology at Uganda Christian University. “We Africans want to live in a community. So the coronavirus is now redefining that community.”

Coming together to worship is part of the “accountability” that builds trust as people share their testimonies, he said.

The “overall levels of religious commitment” in sub-Saharan Africa are among the highest in the world, according to a 2018 study by the Pew Research Center. The region’s number of Christians grew from about 7 million in 1900 to 470 million by 2010, when it was home to 21% of the world’s Christians and 15% of all Muslims.

Christians strongly associate their faith with the brick-and-mortar buildings of their parishes, said the Rev. Charles Odurkami, an emeritus bishop in Uganda.

“Africans are notoriously religious,” he said. “Of course, in Africa some people worship with two feet. One foot in traditional culture and another foot in Christianity.”

Another religious leader in Uganda, a self-described prophet who leads a congregation of thousands in Kampala, has criticized attempts to negotiate with the government to reopen houses of worship.

“It’s disrespectful ... if a so-called pastor goes on his knees and begs a politician to open up,” Elvis Mbonye recently told a local broadcaster. “I will not ask any man to give me the permission, the right, the directives.”

Hajji Ramadhan Mugalu, secretary-general of the Uganda Muslim Supreme Council, said Muslims “are losing out on the ... social aspect” while mosques remain closed.

“If arcades and malls have been opened, our prayer is that these places of worship should also be opened," he said. “Yes, they can pray at home, but congregational prayer is very powerful."

Authorities in Uganda and other countries say they will follow the advice of health experts on allowing places of worship to resume normal operations. In Tanzania, however, President John Magufuli has alarmed health experts by asserting that divine power would offer protection from the virus. The country hasn’t updated its number of infections — just over 500 — since April.

In South Africa, which makes up roughly half of the African continent's 1.2 million confirmed coronavirus infections, the pandemic has challenged people’s relationship with their faith, said Mosa Sona, bishop at Grace Bible Church in the Johannesburg township of Soweto.

“Am I a believer that practices his faith in the midst of a crowd, at a building called a church, or does it matter when I am all alone at home?” asked Sona, whose church was among the first to stream sermons online.

Others insist on staying physically in touch with their coreligionists, no matter what pandemic restrictions say.

In Zimbabwe, the government has encouraged people to pray at home. But that wasn't an option for Amos Mazikande, who recently went to a “prophet” with his apostolic group to seek a cure for his daughter’s persistent headaches.

The family used back roads to avoid police on their way to an open ground where services are held in the capital, Harare.

“Coronavirus will be defeated by the Holy Spirit, so we don’t have to fear it,” Mazikande said.

Across the country, apostolic believers line up to collect “holy” water, oil, pieces of cloth and clay pots that they believe offer protection from “evil spirits” that bring poverty and disease.

At a recent service, about a dozen worshippers huddled to sing and dance, some with face masks dangling from their chins. Under a nearby tree, a woman knelt while the leader sprinkled water and vigorously shook her head in an apparent healing session.

Some say such scenes show the pandemic is strengthening people’s faith no matter how they worship.

Etienne Bonkoungou, a chaplain in Burkina Faso’s capital, Ouagadougou, said he has noticed that since normal church services recently resumed, people who didn’t attend regularly before the pandemic now show up every week.

“People found it necessary to get closer to God because they said it’s only God that can deliver them,” Bonkoungou said.