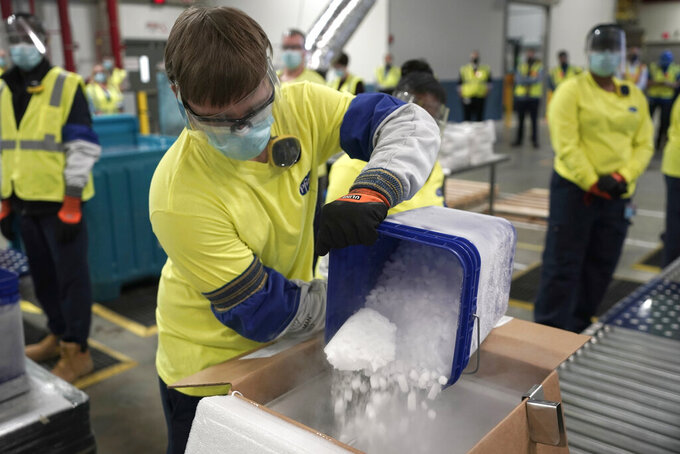 Dry ice is poured into a box containing the Pfizer-BioNTech COVID-19 vaccine as it is prepared to be shipped at the Pfizer Global Supply Kalamazoo manufacturing plant in Portage, Mich., Sunday, Dec. 13, 2020. (AP Photo/Morry Gash, Pool)

After 110,000 deaths ravaged the nation’s nursing homes and pushed them to the front of the vaccine line, they now face a vexing problem: Skeptical residents and workers balking at getting the shots.

Being first has come with persistent fears that the places hit hardest in the pandemic — accounting for nearly 40% of the nation’s death toll — could be put at risk again by vaccines sped into development in months rather than years. Some who live and work in homes question if enough testing was done on the elderly, if enough is known of side effects and if the shots could do more harm than good.

“You go get that first and let me know how you feel,” said Denise Schwartz, whose 84-year-old mother lives at an assisted living facility in East Northport, New York, and plans to decline the vaccine. “Obviously it would be horrible for her to get COVID, but is it totally safe for someone who’s elderly and in fragile health?”

As the U.S. begins shipping out freezer-packed vials of newly approved vaccine from Pfizer and its German partner BioNTech, public health officials say the answer is yes.

Everyone from members of the military to former presidents have announced their intentions to get the shots, echoing the refrains of others who say the drugs are the product of rigorous review, firm data and independent experts.

In an ongoing study of nearly 44,000 people, the U.S. Food and Drug Administration found the vaccine was safe and more than 90% effective across recipients of different ages, including older adults and those with health problems that put them at high risk of COVID-19.

But the undercurrent of doubt in nursing homes persists, sometimes fueled by divisive politics, distrust of institutions and misinformation. And so far, the workers are the ones being heard the loudest.

“Folks are concerned about it, that it was rushed through by people who were not listening to the science,” said Denise Allegretti, a director at 1999 SEIU, the nation’s largest healthcare worker union.

Internal surveys by groups including the American Nurses Foundation suggest many workers in long-term care facilities are so concerned about the vaccine they would refuse it.

Christina Chiger, a 33-year-veteran nurse’s aide at a nursing home in Tampa, Florida, is exhausted and frightened after a relentless nine months that left two dozen residents dead and made 16-hour shifts common. But she has no plans to take the vaccine, for now at least.

“Will there be side effects? Will it actually work?” she asked. “If we all get sick from taking this, who’s going to take care of our patients?”

Resistance to the vaccine in nursing homes is not entirely unexpected — about 3 in 10 staffers, and 2 in 10 residents were not vaccinated for the flu last year, for example — but it’s no less worrisome.

Given how easily COVID-19 spreads, particularly in communal settings, experts believe around 70% of the population will need to receive the vaccine for it to be successful.

Cultural issues could also be at play. People of color make up a majority of aides and other frontline workers in nursing homes, and some minorities express mistrust of medicine that experts see linked with past abuses.

A poll released last week by The Associated Press-NORC Center for Public Affairs Research found Black and Hispanic people in the U.S. are far less likely than white people to agree to be vaccinated. Some 53% of whites said they would get the shots, compared with 24% of Blacks and 34% of Hispanics.

The AP-NORC poll also found women were less likely than men to say they would be vaccinated. An estimated 9 in 10 front-line nursing home workers are women. Overall, about a quarter of U.S. adults said they would refuse to get a vaccine, and another quarter said they weren’t sure.

“They don’t trust it. They don’t trust the science," said Lori Porter, who heads the National Association of Health Care Assistants and blames the Trump administration for making faith in science a political issue and undermining his own experts. “There’s so much misinformation that has circled over this pandemic this whole year that they don’t feel they can trust anyone.”

The federal government is seeking to blunt such attitudes with a $250 million ad campaign set to roll out this week that will eventually target healthcare workers and vulnerable groups. The pitch touts how vaccines will help beat COVID-19 the same way they defeated smallpox, measles and polio.

“One of the great triumphs of medical science ... has been vaccinations,” Anthony Fauci, the top U.S. infectious disease scientist, said in one video.

The American Health Care Association, which represents nursing homes, has called for every resident and staff member to get both vaccine doses by March 1, even though it expects no federal or state mandates requiring shots.

“Our hope is that we get widespread acceptance of the vaccine,” said AHCA’s president, Mark Parkinson. “But if we don’t, I assure you that our organization as well as individual operators will be analyzing whether or not they can mandate the vaccine. We’re just hoping that we don’t have to go there.”

John Sauer, head of the Wisconsin branch of LeadingAge, which represents non-profit long-term care facilities, said the misery most residents and workers have already witnessed should be all the convincing they need. “They know that this could literally be a life-and-death situation.”

No reliable gauges of nursing home residents’ opinion on the coronavirus vaccine have emerged. Among older adults in general, the AP-NORC poll found greater acceptance of the vaccine than among younger people.

But fears persist among many older people, over the possibility of bad interactions for people already on a long list of drugs, or of undiscovered problems specific to their age group.

As with many vaccines, the drug companies say recipients may experience fever, fatigue or sore arms from the injection. Authorities are investigating several allergic reactions reported in Britain by health workers with a history of severe allergies.

Penelope Ann Shaw, a 77-year-old nursing home resident in Braintree, Massachusetts, said she plans to refuse the vaccine, as she does with annual flu shots, because of drug allergies and her concerns about how little is known about the new coronavirus drugs.

“For me, I think it’s a little premature,” said Shaw, who has Guillain-Barre syndrome, an immune system disorder, and was the lone long-term care resident to serve on the federal Coronavirus Commission for Safety and Quality in Nursing Homes. “You’re not doing it with me.”

After a year in which many facilities have walled off to the world, crippling some residents in isolation, and leading to medical declines and deaths in others, some need no convincing.

Among them is 85-year-old Harriet Krakowsky, a resident of the Hebrew Home at Riverdale in New York City, who had friends killed by the virus and is still waiting for visitation restrictions to ease so she can meet two great-grandchildren who were born this year.

“For the first time in six or seven months,” she said, “there’s a little light at the end of the tunnel.”