After Bengals limp to finish, Taylor gets vote of confidence 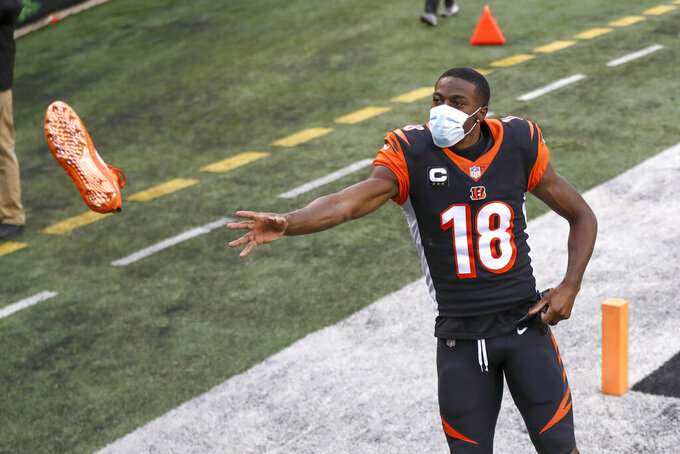 COLUMBUS, Ohio (AP) — Less than 24 hours after Cincinnati fell flat in the final game of another frustrating season, Bengals President Mike Brown made it clear he still thinks coach Zac Taylor is the guy who can turn the ship around.

So the 37-year-old Taylor, 6-25-1 in his first two years as a head coach, will get another chance, perhaps this time with a mostly healthy team, a proper training camp, fewer COVID-19 issues, and some new players to shore up disappointing offensive and defensive lines. There likely will be some different assistant coaches, too.

“We remain bullish on the foundation Zac is building, and we look forward to next year giving our fans the winning results we all want,” Brown said in a statement released by the team Monday morning. “In Zac’s two years, we have added many new starters and contributors through the draft, we have invested heavily in free agency, and we have acquired a talented young quarterback with a bright future.”

Even after stumbling to a 2-14 finish in 2019, the Bengals were full of optimism. They used their first pick in the NFL draft to take Heisman Trophy-winning quarterback Joe Burrow, and they spent liberally on free agents to shore up the defense. But hardly anything went as planned.

With featured running back Joe Mixon and high-priced free-agent defensive lineman D.J. Reader already sidelined with injuries, Burrow blew out his knee on Nov. 22 and was done for the season. Injuries decimated the offensive line — even at full strength the unit was mediocre at best — and defensive backfield. Guys were on and off the COVID-19 list. Veteran defensive end Carlos Dunlap complained too loudly about his lack of use and was traded.

The Bengals (4-11-1) managed to string wins together in Weeks 15 and 16. Amid lots of talk about Cincinnati finishing strong, the motivated Baltimore Ravens came to town for the finale on Sunday They showed the Bengals how much work they still have to do to become a contender in a division that sent every team but Cincinnati to the playoffs. The Ravens' 38-3 win was notable not only for the heroics of quarterback Lamar Jackson but also because it was the most rushing yards — 404 — ever surrendered by a Cincinnati defense.

“This season we faced challenges with injuries at key positions and missed opportunities," Brown said. “That adversity and hard work will help us next season. We’ll enter the offseason looking to shore up our weaknesses and amplify the strengths of our talented young core.”

“Certainly, I'm tired of losing,” he said. “We put in a lot of work and believe in the players we have, the coaches we have, and certainly expect to win a lot more football games than we have. That's certainly the standard we have to set going forward.”

Burrow expressed his confidence in the direction of the team, tweeting Monday: “We have a great foundation and great people at the top. Look forward to giving the fans what they deserve."

A.J. Green, one of the greatest players in Bengals history, likely will be wearing another NFL uniform next season.

He made $18 million for 2020 under the franchise tag with hopes of earning another long-term contract. Instead he had the least-productive season of his 10-year career, and Cincinnati is unlikely to spend big on him again.

The 32-year-old Green’s 65 career touchdowns are one behind the franchise record held by Chad Johnson. Quarterback Brandon Allen tried to get him the record Sunday, targeting him three times in the red zone on a second-half drive, the last pass intercepted in the end zone. It was a microcosm of Green’s season.

“Anything’s possible,” Green said. “I can’t believe how fast it went by. This is my 10th season. It’s been a blessing. The last two years I’ve been hurt, but I wouldn’t trade those moments for anything. They made me a better person, a better football players and a better man.”

The Bengals also will have to decide whether to make a move on veteran defensive tackle Geno Atkins, who made $11.6 million in the second year of a four-year contract. The 32-year-old Atkins played in only eight games because of a shoulder injury and didn't have a sack.

Among free agents likely to be done with the Bengals is Bobby Hart, who wasn't the monster at right tackle that Cincinnati needed as he played out a three-year, $16.1 million contract. Longtime kicker Randy Bullock also likely will be gone after being pushed aside by Austin Seibert.

Coaches always say injuries are no excuse, but for Cincinnati it would have been a legitimate one. Besides Burrow, the Bengals lost tight end C.J. Uzomah in Week 2 and Mixon (foot) in Week 6. Nose tackle Reader (quad), signed to four-year, $53 million deal before the season, went out in Week 5. Injuries to Xavier Su’a-Filo (ankle) and Jonah Williams (knee) mixed up the offensive line. Center Trey Hopkins tore an ACL on Sunday and will require surgery.