After bitter debate, Trump, Biden to speak at charity event 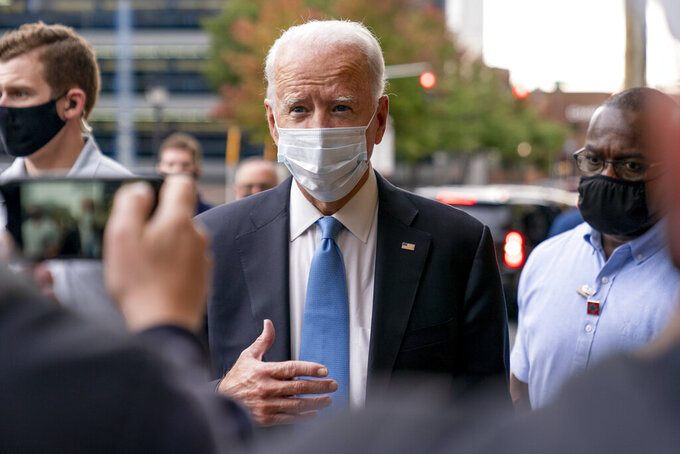 Democratic presidential candidate former Vice President Joe Biden stops to speak to members of the media as he walks out of the Queen Theater in Wilmington, Del., Thursday, Oct. 1, 2020, after pre-taping his speech for the Al Smith dinner. (AP Photo/Andrew Harnik)

WASHINGTON (AP) — And now they joke?

After a week in which they brawled in a debate and flayed each other on the campaign trail, President Donald Trump and Democrat Joe Biden were making appearances Thursday night at an annual event meant to promote collegiality and good humor.

It probably helps that they will be speaking remotely. The two rivals are the entertainment at the 75th Annual Alfred E. Smith Memorial Foundation Dinner, which went virtual because of the coronavirus pandemic.

Trump’s appearance at the dinner four years ago along with Democratic rival Hillary Clinton produced some laughs, but several cringe-worthy moments, too. When Trump described Clinton as corrupt, he crossed the line for many of those in attendance and was booed loudly.

Fast forward four years, and now Trump and Biden have the challenge of poking fun at themselves and each other after a debate night in which Biden called the president a “clown” and “the worst president America has ever had” while Trump questioned Biden’s intelligence and attacked his son Hunter.

The dinner raises millions of dollars for Catholic charities and has traditionally shown that those vying to lead the nation can get along, or pretend to, for one night.

The event has become a tradition for presidential candidates since Richard Nixon and John F. Kennedy appeared together in 1960. In 1996, the Archdiocese of New York decided not to invite then-President Bill Clinton and his Republican challenger, Bob Dole, reportedly because of Clinton's veto of a late-term abortion ban.

This year's dinner comes as Biden and Trump make fierce plays for Catholic voters, a large swath of the electorate that spans the U.S. political spectrum, including a significant slice of swing voters in battleground states.

The former vice president talks often of his Irish Catholic roots. He regularly attends Mass, including when he travels, and he talks often of the role that his faith has played in his life, saying that it “gave me purpose” and “hope” after the deaths of his first wife and young daughter in a car accident in 1972 and the death of his son Beau Biden in 2015.

Nonetheless, the Smith dinner could present some tensions for Biden, even in virtual form. The host, Cardinal Timothy Dolan, archbishop of New York, represents the outspoken social conservative base of U.S. Catholicism. Dolan spoke during the Republican National Convention and for years, including when he led the U.S. Conference of Catholic Bishops, was a frequent cable news presence touting the church’s opposition to same-sex marriage and abortion.

Biden emphasizes other aspects of faith. In one campaign ad, Biden is shown talking about Pope Francis, who has urged Catholics not to focus so vociferously on the church’s opposition to abortion and same-sex marriage at the expense of social justice.

Meanwhile, Trump has won favor with many Catholics for his anti-abortion policies and support for “school choice."

Barrow reported from Atlanta. Associated Press writer Will Weissert contributed to this report from Wilmington, Del.