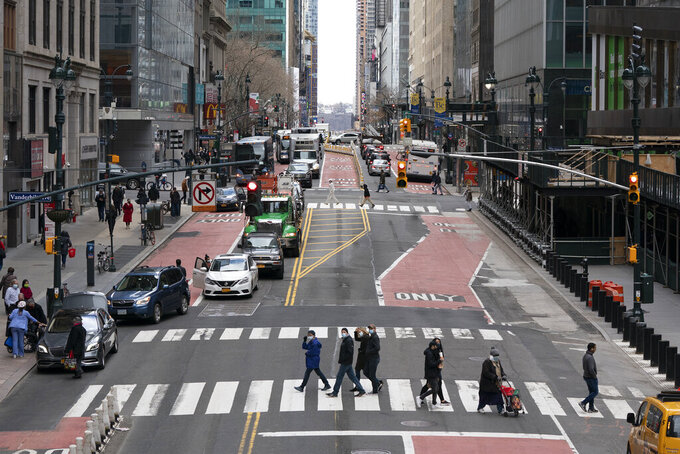 With terrifying swiftness came the first infections, the first restrictions and the first deaths. There were no answers to be found, only dire warnings: Stay away from work, from school, from restaurants and bars, from shops and theaters — and especially from each other.

“It was that feeling ... like you can’t trust your neighbor,” Puchalski said.

A year later, the nation's largest metropolis — with a lifeblood based on round-the-clock hustle and bustle, push and pull — is adapting and showing new life. The renewal is evident in the stream of customers waiting across the Plexiglas-covered counter at Artuso pastry shop in the Bronx; in laughter wafting from outdoor dining sheds built on the streets in front of restaurants; in the parks filled with picnics, birthday gatherings and dance parties, despite the winter chill.

“What is the alternative? Just close the doors and stay home?” asked Gloribelle Perez, who opened a restaurant with her husband in East Harlem only months before the pandemic hit.

For weeks after the virus descended on New York, the strictest warnings held sway. Businesses shuttered. Thousands of people fled. The only sounds in the streets were wailing ambulance sirens. Many saw it as a death knell for the city, a tearing of fabric that might not be repaired.

It’s still quiet, borderline moribund, in some neighborhoods, especially tourist-dependent locales in midtown Manhattan and in the financial district, where companies have made a wholesale shift to remote work. For-lease signs and boarded-up storefronts scar commercial strips all over the five boroughs.

But New York is no “ghost town,” as former President Donald Trump called it in October.

On multitudes of front stoops and sidewalks, people now lounge with friends, masked and 6 feet apart. Businesses are welcoming customers back after putting up sheets of plastic to protect cashiers and laying tape on the floor to keep patrons socially distant.

The just-passed $1.9 trillion federal COVID relief package gives reason for hope, too, with city officials saying it will offer almost $6 billion in direct aid to New York, as well as money for public transportation systems and funding to help restaurants survive.

Perez and her husband have scrambled to keep their Latin- and Mediterranean-inspired restaurant, Barcha, afloat by cutting staff and changing the menu to make the kitchen more efficient. They're also hustling a few extra dollars by offering pandemic necessities like disinfecting sprays, wipes and toilet paper for sale along with dinner deliveries.

“I didn’t get this far, just to get this far,” Perez said. “I didn’t, and so we’re just going to keep going until the wheels fall off.”

Not even snow on the ground has kept Zeynep Catay away from the weekly dance session she now holds outdoors in a Brooklyn park.

The clinical psychologist and dance movement therapist started the sessions in the warmer summer months simply as a way to meet up with a friend and get some physical activity. The gatherings grew and became a way to mark the passage of time, distorted by the endlessness and isolation of the pandemic that has killed more than 530,000 people in the U.S.

“It never occurs to you that one can endure all of these conditions,” she said with a laugh. “I think this is what New York is about ... really creative solutions” and “the freedom in a way of thinking about these possibilities.”

The city began passing a number of grim anniversaries this week.

Friday marked one year since Broadway theaters closed and mass gatherings were banned. The city's roughly 30,000 pandemic victims will be memorialized Sunday in a virtual ceremony marking a year since New York's first known COVID-19 death. Tuesday marks a year since public schools closed. They have since reopened, but with a majority of children still learning remotely from home.

There are still new coronavirus cases, about 2,500 per day on average, and about 2,900 COVID-19 patients are currently in the hospital. But it's nothing like that first terrifying surge in April, when more than 12,000 people were hospitalized and 3,100 in intensive care on the worst days. During a 10-day stretch last April, the city averaged 750 deaths per day. This week it has averaged 61 deaths per day.

The city’s cultural institutions and organizations sought solutions as the pandemic disrupted a year’s worth of concerts, festivals, performances and special events.

Puchalski joined the effort, as the executive director of Open House New York, which normally offers tours of landmarks and other behind-the-scenes looks at city architecture.

They shifted to virtual tours, which had the benefit of allowing people outside New York City to take part, and added events like scavenger hunts, to give people an experience they could do themselves and be socially distanced.

“We have learned to adapt,” she said. “I don’t feel that threat that I felt last year.”

The shift to virtual activities helped in some way, but it clearly wasn’t enough, said Theodora Boguszewski, co-producer at Porch Stomp, an organization that promotes American folk music through an annual music festival and other events.

When it came time for their annual event in June, the usual venue of Governor’s Island was unavailable, so the group shifted performances to the front stoops and porches of people’s homes.

“We really, really felt kind of a sense among our community, this need for live in-person events,” she said.

That’s the draw of New York City, she said, and part of the reason New Yorkers have tried so hard to adapt, to find the ways forward.

“There’s something about that energy and the intersection of different types of people coming together, and that’s why I’m here,” she said. And “if that’s the reason why I’m here, I feel like I’d have to keep doing it in whatever way I can.”

Hajela has covered New York for The Associated Press for more than 20 years. Follow her on Twitter at http://twitter.com/dhajela.