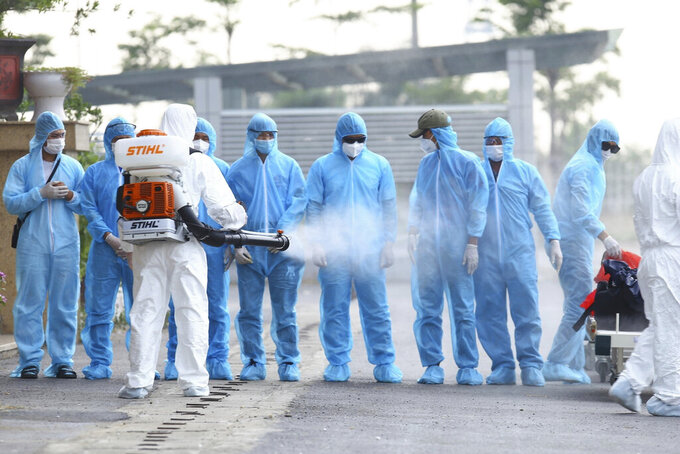 FILE - In this July 29, 2020, file photo, a health worker disinfects arriving Vietnamese COVID-19 patients at the National Hospital of Tropical Diseases in Hanoi, Vietnam. After over a month with no local infections, Vietnam has recorded 176 confirmed coronavirus cases from several outbreaks that have spread to 19 provinces during the past 10 days, the Health Ministry said Friday, May 7, 2021. (Bui Cuong Quyet/VNA via AP, File)

HANOI, Vietnam (AP) — After over a month with no local infections, Vietnam has recorded 176 confirmed coronavirus cases from several outbreaks that have spread to 19 provinces during the past 10 days, the Health Ministry said.

The National Hospital of Tropical Diseases in Hanoi, which has been at the front line treating COVID-19 patients, has been sealed off after a doctor, two nurses and more than 20 patients tested positive earlier the week.

Meanwhile, the city’s K hospital, which is designated to treat cancer patients, also closed Friday after 11 cases of COVID-19 were found.

“The situation is alarming because we are having multiple outbreaks scattered across the country with unclear sources of transmission and multiple variants of the virus,” Health Minister Nguyen Thanh Long said during a government meeting broadcast on national television VTV on Friday evening.

In the 19 provinces and cities with COVID-19 cases, schools have been closed and classes moved online.

In Hanoi, authorities urged people to refrain from gathering while city parks and food stalls were closed. In southern Ho Chi Minh City, gatherings of more than 30 people were banned starting this weekend. The city has also closed bars, clubs, gyms and buffet restaurants.

Meanwhile, a 35-year-old nurse died of a sever allergic reaction after receiving a shot of AstraZeneca on Friday evening, the Health Ministry said.

According to the ministry, over 700,000 people including health workers, contact tracing officials, police and army officers have been inoculated with the AstraZeneca shots, the only vaccine in use in Vietnam.

Since the start of the pandemic, Vietnam has recorded 3,137 confirmed cases with 35 deaths.