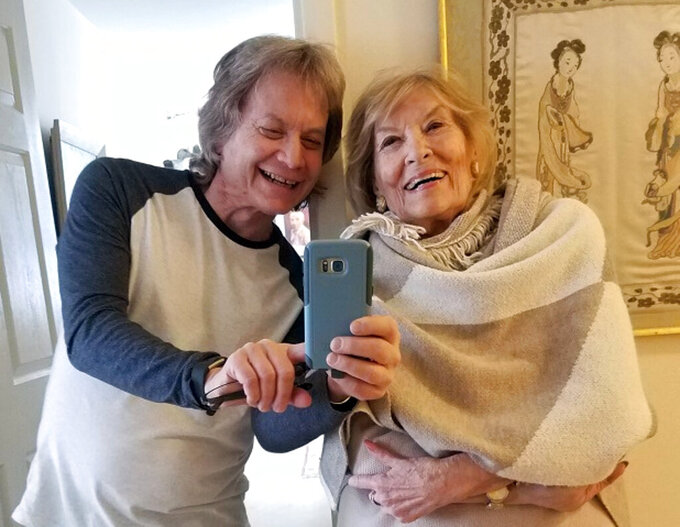 Leland Stein, left, takes a photo with his mother Sondra Green in her apartment in New York on April 26, 2018. The two are reuniting in person for Mother’s Day as vaccinations have made families feel more comfortable gathering for the holiday. (Leland Stein via AP) 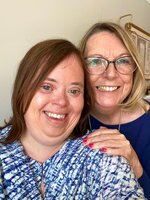 NEW YORK (AP) — When Leland Stein heads to his 93-year-old mother's senior living facility for Mother's Day, he'll have flowers in hand, a bottle of bubbly and a year's worth of hugs.

Many moms, grandmothers and their offspring around the U.S. will be equally thrilled. They were forced to hold off on the physical joys of Mother's Day last year amid pandemic fears and restrictions. This time around, vaccinations and abiding by post-shot waiting periods have brought more security and comfort to bring on the hugs and kisses for sweet in-person — and indoor — reunions.

Of course, not everyone will feel that joy. There are those mourning for mothers lost to COVID-19, and others who are refraining from socializing in person until they, too, can get vaccinated.

During the pandemic, the 64-year-old Stein and his elegant mom have met just once, about six months ago outside of her Brookdale Senior Living location in downtown Manhattan. He couldn't keep away, particularly since Green lost her husband just months before the pandemic took hold, but it was a long trip from his home in Arlington, Massachusetts, for a brief visit on the lawn.

Green's three other sons live in the West, too far to make a Mother's Day trip.

Stein, too, has been feeling the separation and the sting of isolation. At the start of the pandemic in mid-March 2020, the performance space he manages, the Regent Theatre in Arlington, was shut down as the world headed into emergency mode.

“It was Friday the 13th,” he recalled. “We had a sold-out show at the theater and the rug was pulled out from under us. I had just lost a relationship, so I lost my relationship, my community, my family. That was a lot to deal with and I have to say, having my mom still around was very helpful. My mom was cool, calm and collected.”

Raising four boys, Green joked, “you have to stay calm.”

Heather Krug, 49, in Los Angeles hasn't seen her extrovert of a mother, Brenda Krug, in a year and a half. Brenda, too, lives in a senior living community, on the other side of the country in the Long Island hamlet of Woodbury, New York.

“She's been pretty much without family throughout this,” said Krug, who has a sister in the Boston area. “I knew as soon as I was able to get the vaccine I would feel more comfortable about flying but also that I wouldn't be bringing COVID to her or anybody in her community. It's been pretty tough.”

The two will mark Mother's Day and the 81-year-old Brenda's June birthday at the same time. And, bonus, Heather will meet Brenda's boyfriend for the first time after Heather's dad died a couple years ago.

“They met during COVID, which is a good thing because it's kept her spirits up. It's the first person she's dated since my father passed," Heather said. "I'm sure she has a list of things she needs me to do. One is get her on Zoom because that's been an issue, but she's handling everything much better than me."

Heather's sister managed a two-hour rendezvous with their mom over the summer for a restaurant meal outdoors, but she has also kept her distance to be safe. A high school friend of Heather's on Long Island assisted Brenda, who still works as an interior designer, when she came down with COVID-19 in the chaotic early days of the pandemic.

Brenda, who is also missing her recently departed dog, was excited for her up-close Mother's Day.

“I only saw my girls and grandchildren on FaceTime. It's not the same, you know,” she said. “We're definitely a hugging kind of family.”

Maricela Waugh, a 30-something relationship consultant in Los Angeles known professionally as Spicy Mari, has a huge Mother's Day surprise for her mom, Marta. Marta, who has been on the job in San Diego as an essential worker for FedEx throughout the pandemic, has wanted a grandchild for years.

She’s about to get her wish. Waugh is pregnant.

“She’s going to be flabbergasted,” said Waugh, the oldest of three siblings and the first to be expanding her family.

“It's the ultimate gift," Waugh said. “We're extremely close. I tell my mother everything and it's been really hard because I don't really know what to do. I've been asking her a lot of hypothetical questions like, ‘When did you start getting stretchmarks?’”

The two haven't seen each other since April last year, when they got together for a quick meal out.

“We’ve done a few FaceTimes and only from the chest up as this baby bump has grown. But she’s been like, oh you must be gaining the quarantine 15," Waugh said.

One thing's for certain, she said: “I know she's going to cry. My mom is such a crier.”

Mari, who has chosen not to get vaccinated during her pregnancy, plans a brunch outdoors at a Malibu restaurant with mom and other vaccinated loved ones to announce her son’s upcoming arrival.

“I’ve missed everyone so I’m super excited to bring everyone together for Mother’s Day,” she said.

For months, the pandemic kept Janice Shear, 67, from her 41-year-old daughter, Meredith, who has Down syndrome and lives just 15 miles away in a group home run by the nonprofit AHRC Nassau in Rockville Centre, New York.

Meredith's 40th birthday party, with more than 100 guests, was canceled in March last year and the home barred visitors, while Janice's senior living community asked residents to isolate. Janice would make drive-by visits in the car and wave, rather than their usual twice-a-week visits and weekends home for Meredith pre-pandemic.

Last July, restrictions loosened slightly and they managed regular meetups. Now, both are vaccinated, along with other family members. They plan a Mother's Day barbecue at the nearby home of Meredith's sister and her family.

“Last year it was sad. Meredith was my first child. She made me a mother, and pulling up in my car and just seeing her on the front step and then driving away, it was hard," Janice said.

Gordon, 32, and her husband have been vaccinated, along with her 87-year-old grandmother and an aunt. She hadn't seen her grandmother in three years, so decided on a trip to The Villages, near Orlando, Florida, to combine her husband's birthday, Mother's Day and Easter on March 28. Gordon sees her mother regularly; she wasn't fully vaccinated and didn't make the trip.

The group dined out at a country club and caught up with some old friends, all of whom had been vaccinated. They visited Disney World, organized Easter baskets for the kids, baked a birthday cake and cooked meals together.

“I was thrilled,” Gordon said. “It was wonderful. When you don't see somebody for such a long time, it's almost as if time never went by. That three years, in a way, disappeared.”