After solid Twins debut, Maeda aims to finish even stronger 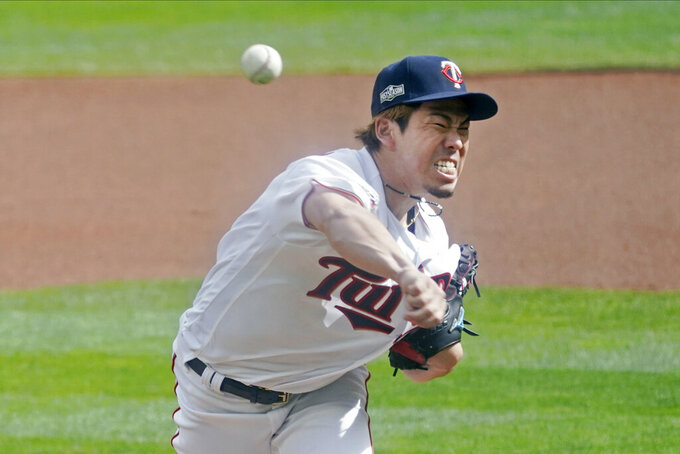 FILE - Minnesota Twins pitcher Kenta Maeda of Japan throws against the Houston Astros in the first inning of an American League playoff baseball game in Minneapolis, in this Tuesday, Sept 29, 2020, file photo. Maeda's first season in Minnesota, albeit abbreviated by the pandemic, was a runaway success. The Japanese right-hander who has averaged 120 innings over the past four years, will have his durability tested in 2021. (AP Photo/Jim Mone, File)

MINNEAPOLIS (AP) — Though Kenta Maeda's first season with Minnesota was abbreviated by the pandemic, the Japanese right-hander's debut was a runaway success.

His ability to be one of the best starting pitchers in the majors has been proven, with the latest evidence a second-place finish in American League Cy Young Award voting for 2020. Now Maeda's durability will get another test.

“The great result last year, hopefully I can build it off going into this season. But during the offseason, I don’t throw much. I rather concentrate on strengthening my body so hopefully I can go in strong and finish strong,” Maeda said through his interpreter, on a video conference call with reporters Thursday the day before the team's first official workout.

During the winter, Maeda said he went heavy on the weightlifting, in part to help his velocity.

“I do age every year, so I have to take that in mind and adjust the strengthening program each year,” Maeda said.

He logged 175 2/3 innings for Los Angeles in his 2016 major league debut, but since then he has averaged only 120 innings over the previous four years. The Dodgers had one of the deepest rotations in the game during Maeda's time with them and used him exclusively as a reliever during their postseason runs in 2017, 2018 and 2019.

Los Angeles was careful with Maeda in part because of elbow irregularities that were discovered during his initial medical review upon transfer from the Hiroshima Carp, his Japanese club. That concern led to the design of a discounted yet heavily incentivized contract with the Dodgers, an eight-year deal that still has three seasons remaining for the Twins. Even if Maeda hits all of his performance bonuses for innings and starts, there's a maximum of $42.6 million remaining through 2023, quite a bargain for starting pitching even in a flattened free agent market.

For Maeda, who long wanted to be a full-time member of the rotation, the clubhouse fit with the Twins has been paramount.

“What’s really important is the trust that I had from the manager, coaches and all the staff and teammates,” Maeda said after throwing his first bullpen session of spring training at the team's complex in Fort Myers, Florida.

Maeda will again join José Berríos at the front of Minnesota’s rotation with Michael Pineda returning behind them. Newcomers J.A. Happ and Matt Shoemaker — whose recent contract agreement has yet to be finalized — will fill out the group. Randy Dobnak, Devin Smeltzer and Lewis Thorpe are back, too, for competition and depth.

“What we got out of Kenta was tremendous," president of baseball operations Derek Falvey said after last season ended. "We’re excited about his future, because he’s a part of us now for a number of years ahead.”