After Trump setbacks, Kim Jong Un starts over with Biden 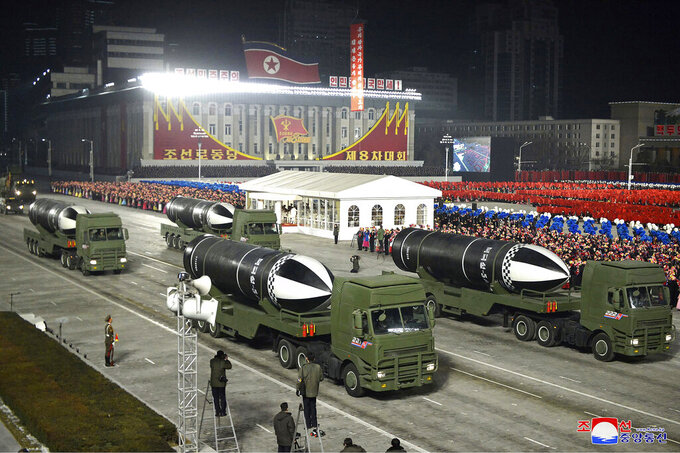 FILE - This Jan. 14, 2021, file photo provided by the North Korean government shows missiles during a military parade marking the ruling party congress, at Kim Il Sung Square in Pyongyang, North Korea. Last year was a disaster for North Korean leader Kim Jong Un, who helplessly watched his country's economy decay amid pandemic border closures while brooding over the collapse of made-for-TV summits with former President Donald Trump that failed to lift sanctions from his country. Now he must start over with President Joe Biden, who has previously called him a thug and accused Trump of chasing spectacles instead of meaningful reductions of Kim’s nuclear arsenal. Korean language watermark on image as provided by source reads: "KCNA" which is the abbreviation for Korean Central News Agency. (Korean Central News Agency/Korea News Service via AP, File)

He helplessly watched his country's already battered economy decay further amid pandemic border closures while brooding over the collapse of made-for-TV summits with former President Donald Trump that failed to lift crippling sanctions from his country.

Now he must start all over again with President Joe Biden, who has previously called Kim a “thug” and accused Trump of chasing spectacles instead of meaningful reductions of Kim’s nuclear arsenal.

While Kim has vowed to strengthen his nuclear weapons program in recent political speeches, he also tried to give Biden an opening by saying that the fate of their relations depends on whether Washington discards what he calls hostile U.S. policies.

It’s unclear how patient Kim will be. North Korea has a history of testing new U.S. administrations with missile launches and other provocations aimed at forcing the Americans back to the negotiating table.

In recent military parades in Pyongyang, Kim showcased new weapons he may test, including solid-fuel ballistic systems designed to be fired from vehicles and submarines, and the North’s biggest intercontinental ballistic missile.

A revival of tensions would force the U.S. and South Korea to reckon more deeply with the possibility that Kim may never voluntarily deal away the weapons he sees as his strongest guarantee of survival.

Kim’s arsenal emerged as a major threat to the United States and its Asian allies following tests in 2017 that included a detonation of a purported thermonuclear warhead and flight tests of ICBMs that demonstrated the potential to reach deep into the American homeland.

A year later, Kim initiated diplomacy with South Korea and the U.S., but it derailed in 2019 when the Americans rejected North Korea’s demands for major sanctions relief in exchange for a piecemeal deal partially surrendering its nuclear capabilities.

North Korea won’t likely be the top priority for Biden, who while facing mounting domestic issues is also gearing up for a push to get back into a 2015 nuclear deal with Iran that Trump blew up in favor of what he called maximum pressure against Iran.

The Biden administration’s “sequence of policy attention will likely be: Get America’s own house in order, strengthen U.S. alliances and align strategies toward China and Russia, and then address Iran and North Korea,” said Leif-Eric Easley, a professor at Ewha University in Seoul.

But North Korea never likes to be ignored.

Although Biden served as vice president under Barack Obama, whose policy was to wait out North Korea while gradually increasing sanctions, that method might not work because the North's weapons capabilities have grown significantly in the years since.

While sanctions, border closures and crop-killing natural disasters have created the toughest challenges of Kim’s nine-year rule, he won’t be in a hurry to offer concessions, Easley said. Kim’s government has a high tolerance for domestic suffering and could expect extensive help from China, its only major ally.

North Korea’s first provocation under the Biden administration could possibly be related to submarine-launched ballistic systems, which Kim showcased in recent parades.

Kim’s ambitions for longer-range ICBMs and reconnaissance satellites that he expressed during the ruling party congress this month could lead to a space launch that would double as a test of long-range missile technology. That would be reminiscent of a 2009 launch that took place weeks into Obama’s first term.

″(The North) is capable of conducting tests that the U.S. and its allies cannot ignore," Easley said. “Kim is likely to exploit this."

The North Korean leader is trying to move the diplomacy toward an arms reduction negotiation between nuclear states, rather than talks that would culminate in a full surrender of his weapons, according to Shin Beomchul, an analyst with the Seoul-based Korea Research Institute for National Strategy.

But North Korea probably won’t test weapons until after Biden’s State of the Union address in February, where he could set the tone of his policy toward the North, Shin said. Kim may also want to see whether the United States and South Korea proceed with a major joint military exercise expected in March.

Although the allies have described their annual exercises as defensive in nature and downsized much of their combined training activity under Trump to make space for diplomacy, North Korea has called for a full stoppage of the drills, describing them as invasion rehearsals and proof of U.S. hostility.

“The North during the party congress has made clear it has no intentions of budging first, but it is also interested in hearing what the United States has to say,” said Shin, who served as a South Korean diplomat during the Obama years.

“Biden will not inherit Trump’s top-down diplomacy, but you could expect him to be more flexible about working-level negotiations, offering to talk with the North Koreans at any time and place and about anything,” he said.

Shin expects Biden to eventually pursue a deal with North Korea that resembles the agreement with Iran that Trump pulled out of in 2018. It could provide North Korea some level of compensation for freezing its nuclear and missile capabilities at their current level.

While the United States won’t likely give up its long-term commitment to denuclearizing North Korea, rolling back the country’s nuclear capabilities to zero is not a realistic near-term diplomatic goal, he said.

But an Iran-style deal might not work with North Korea, which has much more advanced weapons and is unlikely to accept the monitoring steps baked into the Iran deal, said Park Won-gon, a professor at South Korea’s Handong University.

One thing is clear, though, Park said: If North Korea tests its weapons, Biden will dial up sanctions that will continue to push Kim’s economy to the brink.