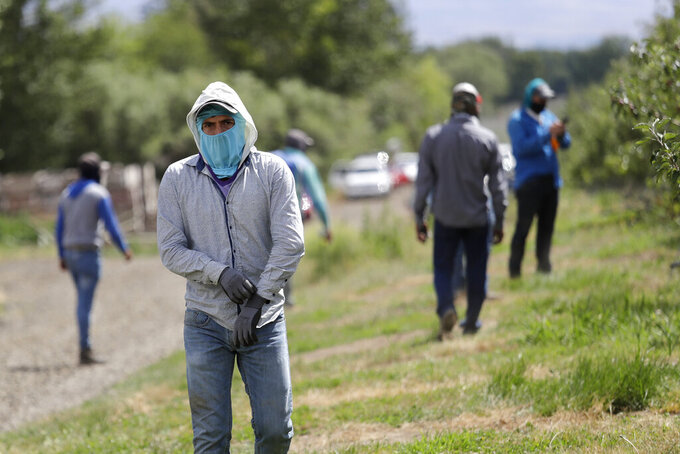 FILE - In this June 16, 2020, file photo, workers at an orchard put on equipment as they prepare to thin apple trees in Yakima, Wash. The agriculture industry is asking Washington state Gov. Jay Inslee to move migrant farmworkers and food factory workers closer to the front of the line for the coronavirus vaccine because they perform work that cannot be delayed or performed remotely. (AP Photo/Elaine Thompson, File)

SPOKANE, Wash. (AP) — The agriculture industry is asking Washington state Gov. Jay Inslee to move migrant farmworkers and food factory workers closer to the front of the line for the coronavirus vaccine because they perform work that cannot be delayed or performed remotely.

A letter sent Thursday to Inslee and signed by the heads of 14 agriculture trade groups said vaccinations offer the greatest hope for reducing COVID-19 risk among food and agricultural workers and their families.

``We strongly support and greatly appreciate the classification of agricultural workers as a high priority behind only health care workers and those with serious health issues in the state’s vaccination plan,'' the letter said.

Separately, Jon DeVaney of the Washington State Tree Fruit Association in Yakima said it makes more sense to treat the agricultural workers as a single group and not divide them by age because a large percentage are migrant workers from other states and temporary foreign workers.

``We've got to deal with that disruption first," Faulk said.

Washington state is a major producer of apples, cherries, hops, potatoes, wheat, berries and other crops. It also has a large food-processing sector that converts those crops into finished products.

Agriculture and food processing generate 164,000 jobs in the state and $20 billion in sales, the letter said.

However, much of the work is tied to food production cycles, which begin in March and cannot be delayed while workers wait for vaccines, the letter said, noting that much of the agricultural workforce in the state is Latino.

``The higher rates of transmission and serious illness among communities of color is a nationwide concern,“ the letter said.

``It would be better to complete vaccination of these essential farm and food workers before we approach peak seasonal agricultural employment," it added.

The letter said reports of delays in vaccinating people, even essential health care workers, are troubling. It acknowledged that more issues will be faced by trying to vaccinate a population that is rural and often has limited English proficiency while being disconnected from local health care providers.

The letter was signed by executives for the Washington Farm Bureau, Washington State Potato Commission, Washington Cattlemen’s Association, Hop Growers of Washington and others.