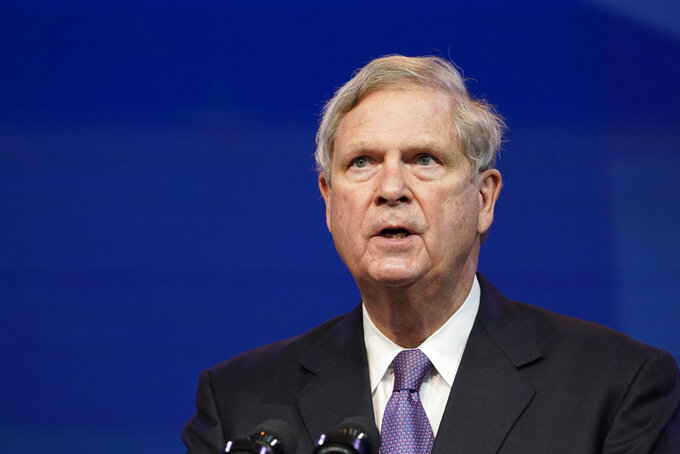 FILE - In this Dec. 11, 2020, file photo former Agriculture Secretary Tom Vilsack, who the Biden administration chose to reprise that role, speaks during an event at The Queen theater in Wilmington, Del. (AP Photo/Susan Walsh, File)

Vilsack, who testified before the Senate Agriculture, Nutrition and Forestry Committee, would bring much on-the-job experience to the position. In addition to serving two terms as the governor of Iowa, he spent eight years as President Barack Obama's Agriculture Secretary.

In his opening remarks, Vilsack, 70, sought to dispel concerns that he would be coming to the job with antiquated ideas.

“I realize that I am back again. But I also realize that this is a fundamentally different time,” he said, referencing a need to rebuild parts of the country's agricultural infrastructure in the wake of the COVID-19 pandemic.

“The reality is we lacked openness, fairness and competitiveness and resiliency, as the COVID-19 crisis has shown, in many of our agricultural markets,” he said.

In his testimony, Vilsack heavily endorsed boosting climate-friendly agricultural industries such as the creation of biofuels.

“Agriculture is one of our first and best ways to get some wins in this climate area,” he said.

He proposed “building a rural economy based on biomanufacturing” and “turning agricultural waste into a variety of products.” He pledged to work closely with the Environmental Protection Agency to “spur the industry” on biofuels.

Republican Joni Ernst of Iowa questioned whether Vilsack's commitment to biofuels would clash with the Biden administration's public commitment to switch the federal vehicle fleet to electric cars and trucks.

“We're going to need both,” he responded, saying there was room for both climate-friendly industries to thrive and pointing out that the Navy has begun to deploy warships that run partially on biofuel.

With systemic racial inequity now a nationwide talking point, Vilsack said the Agriculture Department needed to seriously examine if it was sufficiently supporting farmers of color.

He envisioned an “equity taskforce” to identify what he called “intentional or unintentional barriers that make it difficult for people to access the programs.”

Sonny Perdue, agriculture secretary in the Trump administration, sought to purge hundreds of thousands of people from the SNAP or Supplemental Nutrition Assistance Program — commonly known as food stamps. That effort was defeated in court, and Vilsack said the SNAP program was particularly vital to the country's recovery from the pandemic.

He said he wanted his department to work directly with governors across the country to make sure SNAP benefits were being accessed smoothly and to address the issue of food deserts in low-income communities.

Vilsack seems to enjoy bipartisan support and faced no serious criticism from Republicans on the committee. Senators from both parties seemed to treat his confirmation as a foregone conclusion, and at one point New York Democrat Kirsten Gillibrand referred to Vilsack as "Mr. soon-to-be Secretary.”