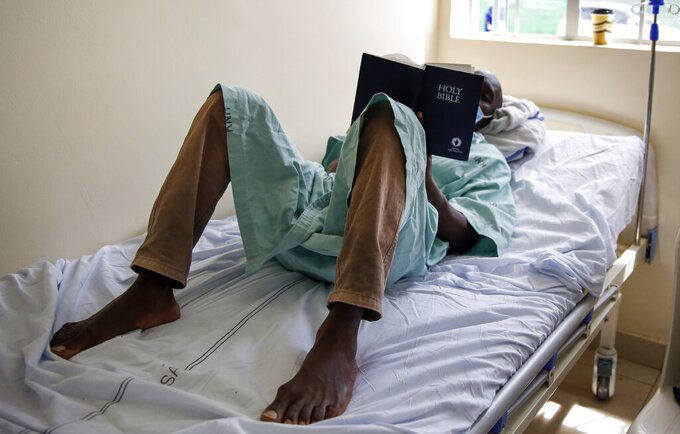 FILE - In this Friday, May 1, 2020 file photo, a patient lies on his bed reading the Bible in a ward for those who have tested positive for the new coronavirus, at the infectious disease unit of Kenyatta National Hospital, located at Mbagathi Hospital, in Nairobi, Kenya. More than two dozen international aid organizations have told the U.S. government they are "increasingly alarmed" that "little to no U.S. humanitarian assistance has reached those on the front lines" of the coronavirus pandemic as the number of new cases picks up speed in some of the world's most fragile regions. (AP Photo/Brian Inganga, File)

JOHANNESBURG (AP) — More than two dozen international aid groups have told the U.S. government they are “increasingly alarmed” that “little to no U.S. humanitarian assistance has reached those on the front lines” of the coronavirus pandemic, as the number of new cases picks up speed in some of the world’s most fragile regions.

The letter obtained by The Associated Press and signed by groups including Save the Children, CARE USA, World Vision and others says that “in spite of months of promising conversations with USAID field staff, few organizations have received an executed award for COVID-19 humanitarian assistance.”

It calls the delays “devastating” and says the window is closing for the U.S. to help mitigate the worst impacts of the pandemic around the world.

The letter to U.S. Agency for International Development acting administrator John Barsa is dated June 4 — the same day that other USAID officials were touting the U.S. government’s “global leadership” in the face of the COVID-19 pandemic.

“To date, we have committed more than $1 billion to benefit the global COVID response,” Kenneth Staley, the leader of the USAID COVID-19 task force, told reporters covering Africa. The funds are typically provided to aid groups as well as private contractors and United Nations agencies.

But much of that aid has been tied up in “uncharacteristic delays” nearly three months after the passage of the Coronavirus Preparedness and Response Supplemental Appropriations Act, the letter from aid groups says.

“The long delays in COVID-19 awards — and as a result, U.S. response to a dynamic global emergency — stands in stark contrast to our experience in crises where (the Office of U.S. Foreign Disaster Assistance) is known to turn around funding in a matter of weeks, if not days,” the letter says.

The letter makes clear the aid problem is a global one, pointing out the exponential rise in cases in Pakistan, and saying “the time to move is now.”

“The U.S. has basically been missing in action on the global front, which is very heartbreaking for me to see,” a director of the Office of U.S. Foreign Disaster Assistance during the Obama administration, Jeremy Konyndyk, said Thursday during a Center for Strategic and International Studies discussion. “What we have is kind of a vacuum and a lot of chaos on the international level.”

Acting USAID spokeswoman Pooja Jhunjhunwala told AP that the more than $1 billion includes $218 million in humanitarian aid through the International Disaster Assistance account — nearly $100 million of that authorized as awards. Aid groups can begin spending the rest of it via “essentially a promissory note from USAID." Some of that amount, however, can also go to U.N. agencies.

“We are in unprecedented times right now, with a rapidly evolving situation on the ground in almost every country,” she said.

For months while promoting U.S. coronavirus assistance, U.S. officials have not given details on the number of crucial items — such as ventilators and testing kits — delivered to countries in Africa, where such equipment has been in short supply for months. And the need is growing.

Cases on the African continent are accelerating, the World Health Organization warned Thursday, saying it took 98 days to reach 100,000 cases and just 18 to reach 200,000. The total number of confirmed is now above 218,000 with more than 5,000 deaths.

Just 3 million tests for the virus have been conducted across Africa, a continent of 1.3 billion people, far short of the goal of 13 million. “One of the biggest challenges we face in the response continues to be the availability of supplies,” WHO Africa chief Matshidiso Moeti told reporters on Thursday.

Another growing problem is infected health workers - nearly 5,000 in the 47-country WHO Africa region — amid shortages of protective gear.

U.S. President Donald Trump in recent weeks has spoken of deliveries of ventilators to African countries, saying 1,000 of the machines were being sent to Nigeria alone. But Nigeria’s government said none has arrived.

In fact, just 50 ventilators have arrived in Africa from the U.S. government, all of them going to South Africa in recent days. That country has about a quarter of Africa's virus cases.

A State Department official on Thursday said the U.S. has pledged ventilator assistance to Congo, Ethiopia, Ghana, Kenya, Mozambique, Nigeria and Rwanda as well. The U.S. is supplying ventilators as soon as the domestic supply chain and vendors can produce and deliver them, the official said.

Some African officials have expressed open dismay or signaled quiet frustration over the U.S. response. Some have called for a “Made in Africa” push to reduce reliance on imports, amid efforts to create homemade ventilators and repurpose factories.

The Africa Centers for Disease Control and Prevention has been quick to praise assistance from the Jack Ma Foundation and others for deliveries of ventilators, testing kits and other badly needed items.

But asked about just how many of those items the U.S. has delivered, Africa CDC chief John Nkengasong on Thursday said that “unfortunately, I cannot give you a number ... It has been a challenging time for many countries to fight their own pandemic.”

Associated Press writers Andrew Meldrum in Johannesburg and Ben Fox in Washington contributed to this report.