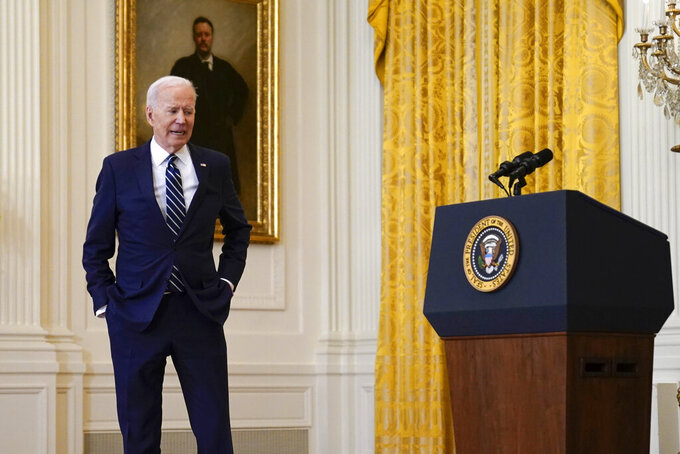 President Joe Biden steps away from the podium as he speaks during a news conference in the East Room of the White House, Thursday, March 25, 2021, in Washington. (AP Photo/Evan Vucci)

WASHINGTON (AP) — A coalition of nongovernmental organizations is calling on President Joe Biden to immediately begin developing plans to share an expected surplus of hundreds of millions of COVID-19 vaccine doses with the world, once U.S. demand for shots is met.

Biden has repeatedly said his primary focus is on ensuring all Americans can get vaccinated, and on Thursday he outlined a new goal to deliver 200 million doses cumulatively over his first 100 days in office. But with all adults set to be eligible for shots by May 1, and the U.S. set to have enough vaccine for its entire population by the end of July, Biden is being asked to facilitate the sharing of excess doses with the world — and to do so without putting strings on the injections or engaging in “vaccine diplomacy.”

In a letter to Biden sent Friday and obtained exclusively by The Associated Press, the groups — 30 NGOs including the ONE Campaign, the International Rescue Committee, Catholic Relief Services and Save the Children — call on Biden's administration to commit to sharing excess doses through the World Health Organization-backed COVID-19 Vaccines Global Access, or COVAX, facility.

“It is estimated that there could be twice as many deaths from COVID-19 if rich countries monopolize the first doses of vaccines instead of making sure they are distributed globally,” the groups write. "Vaccine hoarding could cost the global economy up to $9.2 trillion. Wealthy countries will bear half of those costs because of supply chain disruptions and demand shocks."

They argue COVAX would ensure the vaccines are distributed in a way to “maximize equity." Other countries, such as Russia, China and Israel, have sought to use vaccine sales to bolster their geopolitical positioning.

Biden has moved to have the U.S. contribute financially to the COVAX alliance, which will share vaccines with more than 90 lower- and middle-income nations, but the U.S. has yet to commit to sharing any doses. To date, Biden's administration has only approved the export of about 4 million doses of AstraZeneca's vaccine, which is not authorized in the U.S. but is in use around the world, to Canada and Mexico.

In the coming months, the U.S. surplus is expected to reach into the hundreds of millions of doses, allowing for what the White House calls “flexibility” in responding to any shortfalls and future developments on the potential need for booster shots and vaccinating children.

The U.S. is injecting an average of about 2.5 million doses each day, and the pace is likely to dramatically rise later this month in conjunction with an expected surge in supply of the vaccines, putting the 200 million-dose goal well within reach.

The NGOs want the Biden administration to preempt any contractual or legal issues that U.S. manufacturers would have in sharing vaccines with the world and to outline a delivery schedule for when COVAX could begin to distribute U.S.-produced doses. They also call on drug companies to share manufacturing expertise and for the Biden administration to support the availability of raw materials for vaccines for doses to be distributed by COVAX.

They are calling on Biden to develop a framework for sharing vaccines now, so that once U.S. demand is met supply can quickly be shifted overseas.

Currently, all vaccines produced in the U.S. are claimed by the federal government under the terms of contracts signed by the manufacturers and the government.

The Biden administration has purchased enough doses of Moderna, Pfizer and Johnson & Johnson vaccines to inoculate 150 million more people than the U.S. population by the end of the year.

“Given the optimistic outlook for vaccinating most Americans in the next few months and the huge number of excess doses the U.S. has in its pipeline, the U.S. is uniquely positioned to accelerate the global response to the pandemic by sharing vaccines,” the groups write.