Air travelers to Canada to isolate at hotels starting Feb 22 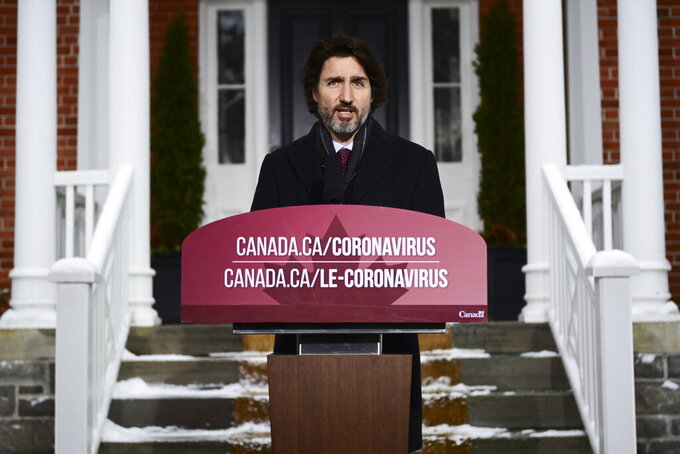 TORONTO (AP) — Air travelers to Canada will quarantine in a hotel starting on Feb. 22 as they await the result of a coronavirus test, Prime Minister Justin Trudeau said Friday.

Government officials confirmed that — with limited exceptions — nonessential air travelers will be required to reserve a three-night stay in a government-authorized hotel at their own expense before they depart for Canada,

Those who cross the U.S. border by land won't have to isolate at a hotel, but will have to show a negative test taken within three days before arrival and be tested on arrival as well as toward the end of a 14-day quarantine at home or elsewhere.

Public Safety Minister Bill Blair said less than 5% of those who cross the land border are nonessential, one reason why the hotel stay is not required for those who enter by land.

The measures especially affect Canadian “snowbirds” who winter abroad and return home in the spring.

Health Minister Patty Hajdu said vaccinated Canadians will not be exempt because research is still not clear on whether those vaccinated can still transmit the virus to others.

Some Canadian “snowbirds” are getting vaccinated in Florida and Arizona.

Trudeau said it could take up to three days for test results to be available and he previously said the cost of a hotel stay for air travelers could be $2,000 Canadian (US$1,576.). The steep cost for the hotel stay includes the cost for security, food and measures hotels will have to take to keep their workers safe.

Travelers would then isolate at home or elsewhere if the test is negative. Canada already requires those entering the country to self-isolate for 14 days and bans nonessential travel to the country.

The Canadian Snowbird Association has said cost of the hotel stay poses financial hardship for many and travelers who test negative should be able to quarantine in their homes.

Some snowbirds are flying back before a hotel stay is mandatory. Dr. Morley Rubinoff, 71, said he left his condo in Puerto Vallarta, Mexico, about six weeks early this year to avoid what he called “hotel hell.” The semiretired dental specialist said he arrived in Mexico on Dec. 31 and had planned to stay until mid-March before returning to Toronto.

While Canada has contracted for far more vaccines than it needs to cover its population, they have been slow to arrive, frustrating many who see a faster rollout in the neighboring U.S.

Canadian officials have said Trudeau spoke with U.S. President Joe Biden about the possibility of getting getting Pfizer vaccines from a plant in nearby Michigan, whose first 100 million doses are already contracted for by the U.S. government.

“I think the president has been clear publicly and certainly privately when the conversation comes up that his focus now is on ensuring that the American people are vaccinated,” White House Press Secretary Jen Psaki said when asked about Canada on Friday.

Canada, which does not have domestic production, has been contracting for vaccines from Europe and elsewhere.

Trudeau said he spoke to the chief executive Pfizer and said he confirmed Canada will get 4 million doses from that company before the end of March, as well as 10.8 million doses in April, May and June — more than previously announced.

Trudeau also said Canada is buying another 4 million Moderna vaccines and is looking at the possibility of getting vaccines from India.