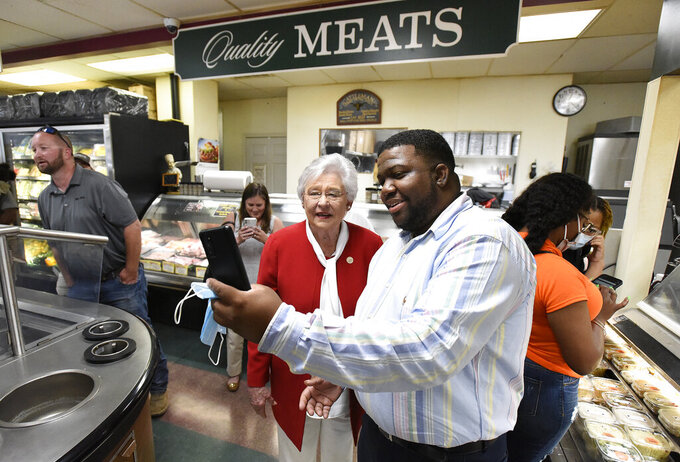 Alabama Governor Kay Ivey takes a selfie with Lakeaton Pearson at Filet & Vine in Montgomery, Ala., as she makes her first campaign stop on Wednesday June 2, 2021. Ivey announced Wednesday that she's running for reelection, citing Alabama's “bucket load of common sense” in its response to the coronavirus pandemic. Ivey, 76, made the announcement in a video message released by her campaign. (Mickey Welsh/The Montgomery Advertiser via AP)

MONTGOMERY, Ala. (AP) — Alabama Gov. Kay Ivey announced Wednesday that she's running for reelection, citing her record over the last four years that includes the state's emergence from the COVID-19 pandemic.

Ivey, 76, made the announcement in a video message released by her campaign. The Republican emphasized her administration's investment in infrastructure, job creation, Alabama's pandemic recovery and its low unemployment rate.

“Alabama is working again, and the best is yet to come," Ivey said in her distinct Southern drawl.

“The COVID crisis has tested us all, but together we've met the call with the same things that make us who we are — faith, resilience and a good old-fashioned bucket load of common sense. The result: a future brighter than any other in America," Ivey said.

The incumbent governor’s entry into the 2022 race likely will discourage some gubernatorial hopefuls from jumping into the fray. Lt. Gov. Will Ainsworth had said he will not run for governor if Ivey seeks another term. No Democrat has declared an intention to run yet.

Speaking with reporters later in the day, Ivey said she is running on her record and to tackle unfinished business. Ivey cited education, the state prison system and job creation as priorities.

“We've got several items that need attention. One is meaningful education reform. Certainly, we'll finish out the prison project. We'll be working with the legislators on that project. And keeping our people employed gainfully and adding more jobs,” Ivey said.

Ivey faced both praise and criticism for her handling of the pandemic. Unlike some Southern governors, she issued a statewide mask order, a move that was criticized by some conservatives but won her praise from health officials and others for following scientific recommendations. The state mask order has since ended.

She has often embraced GOP priorities during her four years in office, including signing the nation's most stringent abortion restrictions into law, making performing an abortion a felony in nearly all cases. The 2019 law, swiftly blocked by the courts, was part of a wave of restrictions passed by Republican-led legislatures that were aimed at getting the U.S. Supreme Court to revisit the issue of abortion.

Ivey also won a political victory in 2019 with legislative approval of a gas tax increase to fund road and bridge construction and improvements at the state docks.

While Alabama's state prison crisis was decades in the making before Ivey took office, the U.S. Department of Justice sued the state last year over its management, saying male prisoners live in unconstitutional conditions with excessive levels of violence. The state prison system disputes the claims.

Hours after making the announcement, Ivey spoke with reporters and greeted diners at a restaurant not far from the Alabama Capitol.

“I think she has done a great job particularly with the corona(virus) situation. She's done a very good job of injecting a lot of common sense into her decisions,” said retired Air Force Col. Joe Panza, who now serves as executive director of the Air University Foundation. “She took some heat for it, but that is what leadership is all about," Panza, 82, said.

“Kay Ivey claims that AL has a ‘future brighter than any other in America' but after a decade of total GOP control, AL still ranks at the bottom of every list, whether it's healthcare, education, or vaccinations," the party tweeted. In a statement, the Democratic Party said the state needs a governor who will support a raise in the minimum wage to $15, legalized marijuana, Medicaid expansion and other policy changes.

Ivey is the state’s second female governor and the first Republican woman elected to the position.

She had been lieutenant governor when she succeeded Gov. Robert Bentley in 2017. Bentley suddenly resigned in the midst of an impeachment investigation partly centered on his relationship with an aide.

She won election to her first full term the next year, defeating Tuscaloosa Mayor Walt Maddox as the GOP dashed Democrats’ hopes of making gains in the deeply red state. Ivey, who is two years younger than President Joe Biden, faced indirect questions about her health during the 2018 race, but easily won her party's nomination and then the general election.

In 2019, Ivey announced she was undergoing radiation treatments after she was diagnosed with Stage 1 lung cancer. Last year, she said medical scans show the treatment worked and she is cancer-free.

Ivey on Wednesday brushed aside a question about her health and said she has the stamina to handle another term.

"Four more years and more if I could run again," Ivey said. Ivey by law is limited to two consecutive full terms.