Alabama to require face masks as coronavirus surges in state 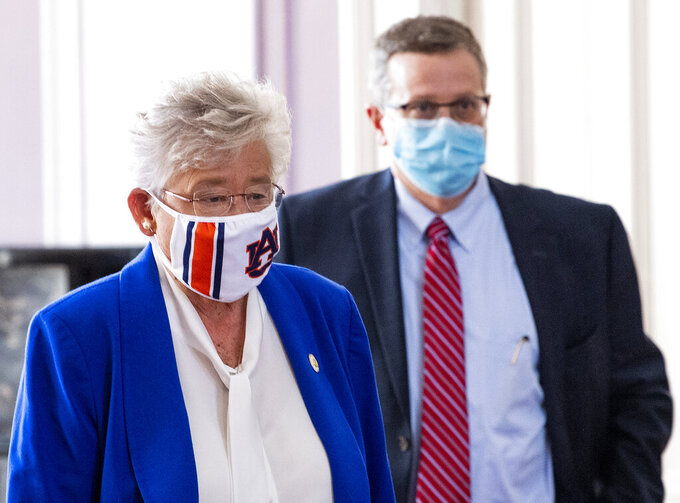 MONTGOMERY, Ala. (AP) — Alabama will begin requiring face masks in public as health officials try to quell a surge of new coronavirus cases that is filling up hospitals, Gov. Kay Ivey said Wednesday.

In an announcement made a day after the state reported a pandemic-high of 40 deaths in a single day, officials said masks would be required starting Thursday afternoon for anyone older than 6 who's in public and within 6 feet (2 meters) of someone who's not a relative.

The rule, which makes exceptions for people who have certain medical conditions, are exercising, or performing certain types of jobs, will last through July 31, meaning it is set to expire before most public schools reopen. But other health orders have been extended to fight COVID-19, the illness caused by the new virus.

Ivey said statistics showing a precipitous rise in confirmed coronavirus cases in Alabama over the past two weeks “just do not lie.”

“We’re almost to the point where our hospital ICUs are overwhelmed," Ivey told a news conference at the Capitol.

The governor previously pleaded for residents to show “personal responsibility” in fighting the new coronavirus that causes COVID-19. Ivey declined to impose new restrictions as recently as June 30, when she said a statewide mask order would be “next to impossible” to enforce.

Violating the new order can result in a fine of $500 and jail time, Ivey said, although she stressed that protecting residents, not imposing penalties, is the goal.

“We're pleading with the people of Alabama to wear a mask,” she said. Businesses aren't required to refuse entry to people not wearing masks, but Ivey says the order allows them to do so as a “reasonable step” for encouraging mask use.

Lt. Gov. Will Ainsworth, a Republican like Ivey, criticized the order as “an overstep that infringes upon the property rights of business owners and the ability of individuals to make their own health decisions.”

But Democratic Sen. Doug Jones said the governor “did the right thing” in mandating masks and listening to health professionals.

The state recorded a record of more than 2,100 new cases on Tuesday, and about a third of all cases have been added in the past two weeks, said Dr. Scott Harris, the state health officer.

“Clearly we have more disease circulating in our community,” he said. Nearly 17% of virus tests are now coming back positive, nearly double from May, statistics posted on the state health department website show.

The pandemic kept getting worse in Alabama as many flouted recommendations for face masks and staying away from others in public. Restaurants, bars, theaters, gyms, sports leagues and churches have all reopened with restrictions, and it's common to see people without masks in public spaces.

With the state's caseload increasing by an average of more than 1,500 a day over the past week, hospital officials say fewer than 15% of the state's intensive care beds are available for new patients, and some hospitals are completely out of room, Harris said.

The state reported 40 deaths on Tuesday, a high that pushed the death toll to more than 1,180. More than 58,200 people have been diagnosed with COVID-19 in Alabama.