Alarm in Africa: Virus surges, vaccines grind to 'near halt' 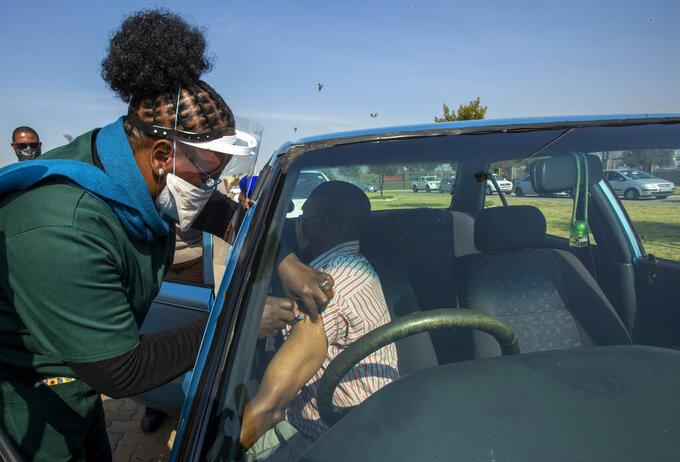 Health workers vaccinates a pensioner with a first dose of the Pfizer coronavirus vaccine at the newly-opened mass vaccination program for the elderly at a drive-thru vaccination center in Johannesburg, South Africa, Tuesday, May 25, 2021. (AP Photo/Themba Hadebe)

CAPE TOWN, South Africa (AP) — COVID-19 vaccine shipments have ground to “a near halt” in Africa while virus cases have spiked 20% over the last two weeks, the World Health Organization said Thursday, a bleak scenario for the continent on both those critical fronts.

South Africa alone saw a more than 60% rise in new cases last week as the country with the highest coronavirus caseload in Africa continued to face delays in its effort to roll out the single-dose Johnson & Johnson vaccine.

More than 1 million J&J doses that should have already been put to use remain on hold at a pharmaceuticals plant in South Africa because of contamination concerns at a U.S. factory. The head of the Africa CDC said he expects an update in the coming days from U.S. federal regulators on those and other doses of J&J, which he called an essential vaccine for Africa because it's a one-dose shot and doesn't need the ultra-cold storage facilities required by others.

“The threat of a third wave in Africa is real and rising," WHO Africa director Dr. Matshidiso Moeti said. "Our priority is clear. It’s crucial that we swiftly get vaccines into the arms of Africans at high risk of falling seriously ill and dying of COVID-19.

“While many countries outside Africa have now vaccinated their high-priority groups and are able to even consider vaccinating their children, African countries are unable to even follow up with second doses for high-risk groups."

Moeti repeated Africa's ongoing plea that richer countries that have reached “significant vaccination coverage" now release their remaining doses. Africa has administered vaccine doses to 31 million people out of its population of 1.3 billion. But only 7 million of those have received both doses.

Moeti's plea came hours before President Joe Biden announced that the U.S. would share some of its vaccines.

The issue with contamination of Johnson & Johnson doses at a U.S. facility is a tiny part of the problem, but it's a crucial one right now for South Africa, which has more than 1.6 million virus cases and more than 56,000 deaths, the most in Africa by far.

South Africa has seen a positivity rate of around 11-12% among people tested for the virus in recent days, well above the 5% threshold that South African President Cyril Ramaphosa said marks “a cause for concern."

Meanwhile, the country's vaccine rollout has faced a number of hurdles. The country ultimately rejected the first vaccine available over concerns about whether AstraZeneca showed enough efficacy against the variant first detected in South Africa — now referred to by WHO as the beta variant.

Now the contamination problems at the Emergent BioSolutions plant in Baltimore earlier this year have directly impacted South Africa's already lagging rollout. South Africa's health department was due to receive 1.1 million J&J doses in May. Another 900,000 were then meant to be delivered at the start of June, according to the government's schedule.

Both batches are in South Africa but remain frustratingly on hold after the US. Food and Drug Administration shut down the Emergent plant in mid-April and put a lockdown on any doses that might be linked to it across the world. South Africa has vaccinated only 1.1 million of its 60 million people, and more than half of them have only received one dose of a two-dose vaccine.

Africa Centers for Disease Control and Prevention director John Nkengasong said he was in contact earlier Thursday with J&J officials and they told him an announcement by the FDA was expected Friday or early next week.

South Africa wasn't the only country affected by the contamination in Baltimore, Nkengasong said. Also at stake is the African Union's 220 million dose deal with Johnson & Johnson set for delivery later this year, which could eventually rise to 400 million doses total.

“Our entire strategy is underpinned” by the J&J agreement, Nkengasong said of Africa.

On Tuesday, the FDA declined to comment on when it might resolve the concerns over Emergent’s factory, which included poorly trained workers and dirty walls and floors, and led to the immediate discarding of 15 million J&J doses connected to the factory.

Johnson & Johnson said that it was working with the FDA and Emergent toward resolving the situation “as soon as possible” but didn't comment on any specifics of the FDA investigation.