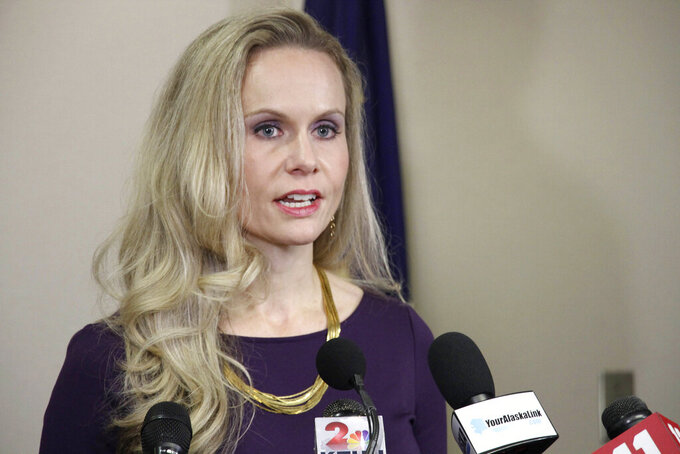 FILE - In this Sept. 26, 2019 fle photo, Alaska Department of Administration Commissioner Kelly Tshibaka addresses reporters in Anchorage, Alaska. Tshibaka a candidate for U.S. Senate in Alaska previously wrote articles in support of an organization that espoused gay conversion therapy, questioned the integrity of elections and described the "Twilight" books and movies as evil. Many of the past articles, blogs and posts from candidate Tshibaka have been deleted but some are available through archived internet pages, as first reported Tuesday, April 27, 2021, by CNN. The CNN article, Tshibaka said in an email to The Associated Press, "is just proof that our campaign is gaining momentum, which has Lisa Murkowski and her allies scared to death. (AP Photo/Mark Thiessen,File)

ANCHORAGE, Alaska (AP) — A candidate for U.S. Senate in Alaska previously wrote articles in support of an organization that espoused gay conversion therapy, questioned the integrity of elections and described the “Twilight” books and movies as evil.

Many of the articles, blogs and posts by candidate Kelly Tshibaka have been deleted but some are available through archived internet pages, as first reported Tuesday by CNN.

Tshibaka said in an email to The Associated Press that the CNN article “is just proof that our campaign is gaining momentum, which has Lisa Murkowski and her allies scared to death."

“Nothing frightens the DC political insiders more than the thought of a strong, independent Alaskan leader in their ranks,” she said.

Tshibaka formerly worked in several offices of inspector general in the U.S. government before becoming the commissioner of the Department of Administration in Alaska under Gov. Mike Dunleavy in 2019. She quit last month to enter the Senate race.

U.S. Sen. Lisa Murkowski, a Republican who has held the Senate seat since 2002, has filed a statement of candidacy with the Federal Election Commission, which allows her to raise money. Murkowski, who reported having $1.3 million available as of March 31, has not formally announced whether she’s seeking re-election.

Murkowski filed the FEC statement, as a Republican, a week before state Republican party leaders censured her for voting to convict former President Donald Trump at his impeachment trial earlier this year. The party also said it did not want Murkowski to identify as a Republican in the 2022 election.

Messages sent to Murkowski’s press aides were not immediately returned to the AP.

Days after major news organizations, including the AP, declared Joe Biden the winner of the 2020 election, Tshibaka posted on Instagram: “Eyewitness testimony of voting impropriety, fraud, tampering or oppression in states like PA, MI, GA, NV, and AZ constitutes ‘evidence.’”

In the November election, Alaska voters approved Proposition 2, an initiative that would do away with party-run primaries and send the top four vote-getters, regardless of political affiliation, to the general election.

General elections would then use a new ranked-choice voting system. Some see this as a boost for Murkowski, who in 2010 lost her party primary but went on to win the general election as a write-in candidate.

Tshibaka also tweeted about a Texas lawsuit challenging changes to election laws because of COVID-19, which was dismissed by the U.S. Supreme Court because Texas did not have standing to sue. She said if Texas were to win, then Alaska’s election laws could also be challenged.

“Imagine what this could mean for Proposition 2 (where absentee ballots tipped votes in favor of the jungle primary) and for certain state Legislature races? Alaska can throw out all absentee ballots without a witness signature, for example,” she tweeted.

She told the AP on Tuesday that “allegations regarding voting integrity should be investigated and fully examined.”

When Tshibaka was at Harvard Law School, she wrote “The Right Side: Coming Out of Homosexuality,” for The Harvard Law Record, an independent newspaper at the law school, in December 2001.

“Today is National Coming Out of Homosexuality Day, a day dedicated to helping homosexuals overcome their sexual tendencies and move towards a healthy lifestyle,” she wrote in the article under her maiden name Kelly Hartline.

In the article she touts the work of Exodus International, a group that advocated gay conversion therapy. The group a decade later closed and apologized for the harm it did to the gay community.

“Homosexuals can come out of homosexuality because their preference is not biologically mandated." Tshibaka wrote in 2001. “Unlike race or gender, homosexuality is a choice.”

She also later apologized to readers who were upset over the article, saying she did not intend to offend.

Tshibaka said she was assigned the article by an editor as a counterpoint piece. “I don’t hold that view today,” she told the AP.

In blog posts, she said the “Twilight” vampire movies and books are “evil and we should not read or watch it.”

“Some say this book is harmless, that it promotes Christian values, and that it does not promote anything wicked at all,” she wrote. “But Satan does not usually look repulsive, horrific, and evil on the outside.”

She told the AP that children should read more, but the “Twilight” books don’t hold a candle to Dr. Seuss.

“I think Alaskans will care more about who will protect their gas and oil jobs than they do about young adult vampire fiction,” she said.

The state elections office says others who have registered for Senate include Dustin Darden with the Alaskan Independence Party, Huhnkie Lee, who is undeclared, and Republicans Samuel Little and Karl Speights.