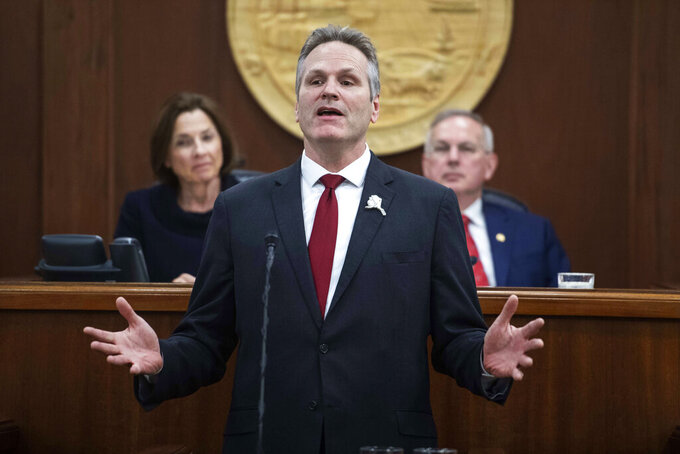 FILE - In this Jan. 27, 2020, file photo, Alaska Gov. Mike Dunleavy, center, delivers his State of the State speech to a Joint Session of the Alaska Legislature as then Senate President Cathy Giessel, R-Anchorage, left, and then Speaker of the House Bryce Edgmon, D-Dillingham listen. On Thursday, Jan. 28, 2021, Dunleavy is set to deliver his State of the State address remotely, from his office in Anchorage, because of the coronavirus pandemic. (AP Photo/Michael Penn, File)

JUNEAU, Alaska (AP) — Alaska Gov. Mike Dunleavy said he will support gaming as a way to generate revenue amid persistent budget deficits and laid out ideas to help the state become more self sufficient, including seeking opportunities to develop renewable energy projects.

The Republican, in his State of the State speech Thursday, spoke in broad strokes about some of his ideas to build and boost sectors of the economy. He said his administration would make it easier for farmers to secure land with fewer regulations and that he would begin discussions to see what pharmaceuticals the state could produce on its own.

The state also is looking at regulations that “stifle innovation and frustrate Alaskans,” he said.

Dunleavy, whose idea for creating a statewide lottery failed to gain traction during a legislative session shortened amid COVID-19 concerns last year, did not say what type of gaming legislation he would support. But he said the state “can no longer afford to deny itself a revenue stream available to nearly every other state in the nation.” Gaming also could create “hundreds of high-paying jobs” in some communities, he said.

The speech was unusual, delivered in Anchorage rather than before a joint session of the Legislature in Juneau, as is custom. Dunleavy's office cited “complications created by” the COVID-19 pandemic in describing the decision.

The speech, which Dunleavy spokesperson Jeff Turner said was prerecorded, was carried on Dunleavy's Facebook page and on a public affairs channel.

As part of a plan to address the economic fallout from the pandemic, Dunleavy reiterated his call for payments to residents from the state's oil-wealth fund and an infrastructure bond package he said would put Alaskans to work and turn low interest rates into “historic opportunities.”

He also said he would propose legislation to increase funding for public homeschooling, which he described as schooling at home in partnership with local school districts. Dunleavy, a former teacher and school administrator who has advocated school choice, said this form of schooling has grown during the pandemic.

The governor also said he would establish a temporary office to ensure federal aid dollars are targeted toward improving reading scores in public schools and called for the state education department to establish summer camps to improve student reading, math and coding skills.

The state, once heavily reliant on oil, is in the midst of a near-decadelong run of deficits. The state has no statewide sales or personal income tax and has been using savings and earnings from the state's oil-wealth fund to help pay its bills.

Dunleavy is proposing a constitutional amendment calling for voter approval of new taxes and legislative approval of taxes passed through a citizen initiative. He was previously unsuccessful in pushing a similar proposal.

The Alaska Senate is led by Republicans. The House has yet to organize.